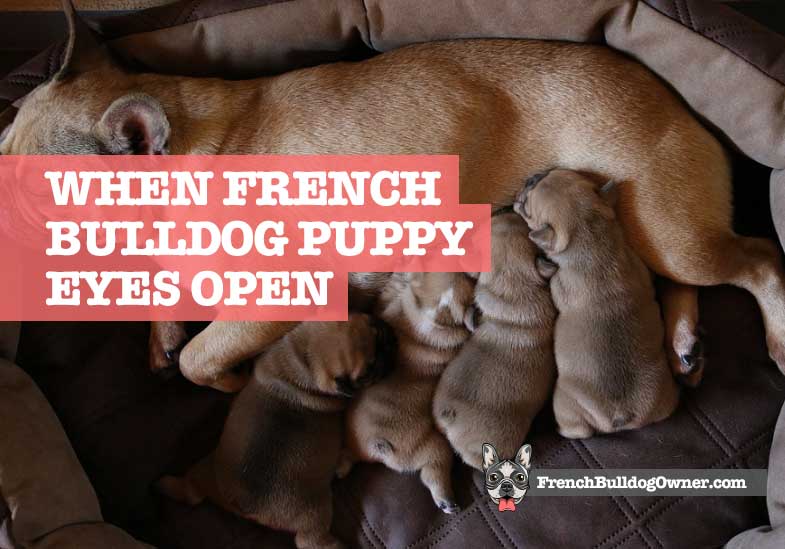 French Bulldog puppies need a lot of care and attention. They will be very dependent on their mother, particularly in the first 4 weeks. In fact, for the first few days of their lives, they cannot even see as their eyes will still be closed. But when exactly do Frenchie puppy eyes open up?

Sight development starts before hearing, as French Bulldog puppies won’t open their ears for a few days after their eyes have opened. Frenchie puppy ears will open around 2 weeks of age.

Below is a very general timeline showing the developmental stages of a French Bulldog puppy.

Why are Frenchie puppies born with their eyes closed?

According to the Psychology Today website (view source), puppies are born blind due to evolutionary reasons relating to survival.

Dogs evolved from the wild wolves and used to survive by hunting. The science believes that a pregnant dog carrying a large litter of puppies would become slow. That would mean the female was at risk of being prey for other animals and would also struggle to hunt for herself and unborn offspring.

Did You Know? French Bulldogs don’t make for great hunting dogs. I’ve rated Frenchies on a hunting scale and score them quite low. Go take a look at why.

As a result, nature dictated that it would be better for puppies to be born earlier without being fully developed – for example with eyesight and hearing. By doing so, the female dog would not have to carry as much weight and for long.

Just like other dogs, the gestation period of a French Bulldog evolved to be short. Frenchies are pregnant for between 58 and 68 days, meaning the puppies are born without the full senses being developed.

Here’s quote from the Psychology Today article on puppies being born blind:

“Getting the pups out of the womb and onto the ground quickly is an advantage. In addition, between hunts (which can be spaced days apart) there is not much to do, so the female has time to care for helpless infants. When she is out pursuing food, the pups can be safely stored in a den.”

Did you know that all puppies are born with blue eyes, and in most cases, they will change to a brown color at around 10 weeks?

There is an exception to this rule, which is with Blue Fawn Frenchies whose eyes will remain blue for the remainder of their lives. You can read more about this and why it happens in this article about Frenchie’s eyes changing color.

When can Frenchies leave their mother

Due to the lack of senses and dependence on their mothers, Frenchies should never leave their mother before they are at least 8 weeks of age.

You can read more about this and how to make sure you don’t end up taking a puppy from an irresponsible breeder in this guide to the right time to get a puppy.

When safely sleeping and feeding from their mother in the first couple of weeks, Frenchie puppy don’t need to have their eyes open. They will be completely deaf and blind for possibly up to 14 days, being completely dependent on mom.

However, after that period, their development will speed up extremely rapidly, with many Frenchie puppies even starting to run around and do little barks at 5 weeks of age.

At this point they will want to explore the wide world around them. With their eyes and ears open, and other senses coming to life, will start to become the French Bulldogs that we all know and love for their irresistible character.

Handy Hint: Did you know that some Frenchies are more predisposed to hearing loss than others. Find out which colors of French Bulldog can suffer with genetic deafness.

If you are thinking about getting a French Bulldog, please read the following guides: