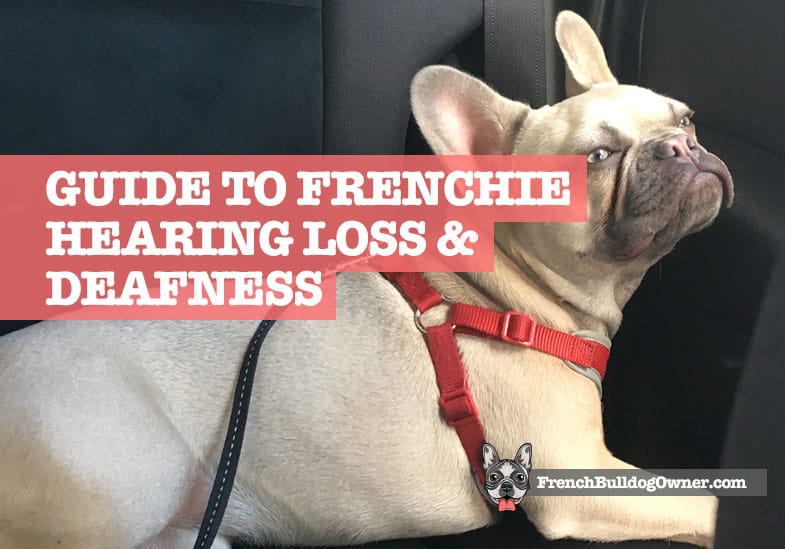 Today I wanted to talk about French Bulldog hearing problems, why they happen, how Frenchies can lose their hearing, plus how some will even be born with hearing issues.

If you are concerned about your Frenchie’s hearing or believe yours could be deaf, please read on to find out what you can do. I have written some notes on how you can take care of a deaf Frenchie towards the end of this page.

But firstly, let me answer a few of the most common questions first in a more concise format.

Do French Bulldogs have hearing problems? White French Bulldogs are more prone to hearing issues due to a genetic trait which will be present from 6 weeks old. Just like other dogs, Frenchies can get hard of hearing in later life too.

How to tell if French Bulldog is deaf? The most precise way to tell if your French Bulldog puppy is deaf is to have a BAER hearing test performed. With older dogs you can also diagnose hard of hearing by squeezing squeaky toys and illicting no reaction.

What causes deafness in Frenchies?

There are two main reasons why your French Bulldog has hearing problems. The first one is congenital deafness from birth. This is common in breeds which have the extreme piebald gene, particularly dogs with white fur. I will explain more about the French Bulldog deafness gene in the next section.

The second reason why your French Bulldog is deaf could simply be down to age or illness. Hearing problems are common in older dogs, just like us humans can develop deafness in our own later years.

Age-related deafness or hearing loss relating to illness can occur due to:

Congenital deafness can appear in French Bulldogs who have white pigmentation in their coat. Scientists have discovered that dogs with white in their fur are more likely to suffer with hearing problems from birth.

French Bulldog hearing problems are more common in white Frenchies, with the deafness developing in the first month of their life. Dr George M Strain of Louisiana State University wrote this in a research paper (view source):

“Deafness usually develops in the first few weeks after birth while the ear canal is still closed, usually results from the degeneration of part of the blood supply to the cochlea. The nerve cells of the cochlea subsequently die and permanent deafness results”

Congenital deafness isn’t always a problem with white Frenchies though. Hearing problems can also be inherited from abnormal genes in the parental chain.

French Bulldog coat colors which have the highest risk of hearing problems are:

Do French Bulldogs have good hearing?

With ear infections being quite common in Frenchie’s, it’s not unusual for them to get deafer as they get older if they get an infection. However, as a general rule of thumb, French Bulldogs do have good hearing.

And there’s a good reason why Frenchies have good hearing too. It’s because Frenchie ears stand up straight (most of the time), it means they can be very alert to sounds.

Dog breeds with upright ears hear much better than those with floppy ears. The placement and size, plus the ability to swivel the ears lets Frenchies hear better than many other dogs.

What about French Bulldog selective hearing?

If you’re part of Frenchie social media groups, you might have heard about their selective hearing.

The reason this is commented about so much is due to the stubborn nature of Frenchies; they can be difficult to train, and this sometimes seems like they have selective hearing!

Are all white French Bulldogs deaf?

Whilst dogs with white fur or piebald coats are more at risk from hearing loss in one or both ears, not all white Frenchies will be affected.

Research published on the Psychology Today website found that dogs with white hair have a 20% chance of suffering with congenital deafness in both ears (view source). Another study I found reported that hearing loss in just one ear had a 37.5% chance in white Frenchies.

If you are thinking about buying a white French Bulldog puppy, then I would recommend that you request a hearing test. This can be done with puppies as young as 6 weeks old.

Whilst being deaf in one ear should not put you off from getting a dog, complete hearing loss will be a challenge. Deaf dogs demand a lot of care and attention as their quality of life can be severely impacted.

Lower down the page I will explain more about how you can arrange a hearing test for a French Bulldog using the BAER test.

How to tell if a French Bulldog is deaf

You might just have a French Bulldog with selective hearing. Joking aside, they are a stubborn breed (read the pros and cons to Frenchies) who will often ignore you if they don’t want to follow a command.

However, if you genuinely believe your French Bulldog is deaf and hard of hearing, here are some things you can do to diagnose the issue before going to the vets.

However, please don’t accept your French Bulldog is losing hearing just because they tick off all the symptoms listed above. Whilst they may give an indication, they should not be relied on to tell if a French Bulldog is deaf; you need to arrange a proper hearing test.

How to test your Frenchie’s hearing with a BAER test

There is only one universally approved dog hearing test that Frenchies should undergo; it’s called the BAER (Brainstem Auditory Evoked Response) test. It uses specialist hearing test equipment that is only available in a few select veterinarian practices.

Handy Hint: If you’re based in the UK you can find a list of vets that can conduct BAER hearing tests on the Kennel Club website.

How the BAER hearing test works

French Bulldog puppies as young as 6 weeks old can undergo the BAER hearing test. At this age, congenital deafness will have matured into a hearing loss condition.

The BAER hearing test works by connecting electrodes and acupuncture needles under the dog’s skin. One at the front of the ear, one on the head, and one on the forehead – it shouldn’t hurt your Frenchie puppy so don’t worry.

The electrodes are then connected up to a machine which measures how your Frenchie’s brain responds to sounds being transmitted through a small headphone over one ear at a time.

Both ears will be tested for hearing loss, the end result being a printed report with a graph and the hearing test results listed on it. The vet will explain whether this means your French Bulldog is deaf or has partial hearing loss.

There are three main categories of hearing loss that are reported on:

The BAER hearing test will cost around $85 dollars in the United States and around £100 in the UK as at October 2019.

For older French Bulldogs with hearing issues there is a different hearing test available called the Threshold test. It still uses the BAER machine but instead tests volumes of frequency – very similar to a human hearing test in fact.

Just like with the BAER testing, you will receive a printout and report which shows whether your French Bulldog is losing hearing or not.

Hearing loss is very common in older dogs, but there are ways in which you can care for a French Bulldog with deafness which I will explain further down.

Should you buy a deaf French Bulldog?

Owning a completely deaf Frenchie will come with a lot of challenges. Deaf dogs are harder to train, will startle easier, and will have problems socialising with other dogs and your own household.

If you are buying from a breeder then ask for proof of a hearing test before you purchase. If the breeder cannot supply one, get written confirmation they will take the puppy back should you find it’s deaf in both ears.

If you yourself are a Frenchie breeder, have both the male and female tested before breeding. This will reduce the risk of congenital French Bulldog deafness gene being passed down to the litter.

How to care for a deaf French Bulldog

If you do buy a deaf French Bulldog puppy or have an older dog who goes on to develop hearing problems then here are a few tips.

Can you get dog hearing aids?

Yes, there are dog hearing aids available. However, proper ones are very expensive ranging from $3,000 to $5,000 dollars.

Aside from the cost, it’s actually very hard to get a dog to respond to a hearing aid. Many dogs will struggle to interpret the noise and they will need extensive training to use the device.

And the bottom line; a dog hearing aid will not completely restore your Frenchie’s hearing. There have been many hearing aids developed over the years, but there still isn’t one that really works as you would want or expect it to.

What other breeds of dog are prone to deafness?

Aside from French Bulldogs, hearing loss is also very prevalent and common in the following breeds.

If you believe your French Bulldog has hearing loss, then please do visit your vet. I am not a vet so any information on this page is a result of my own experiences in owning this breed, and research I’ve done online.

If you’re buying a puppy, don’t be put off by hearing loss in just one ear. This is completely manageable and should not impact on the quality of life.

However, do your diligence with a breeder and ask for hearing test results before you buy.

I’ve also published a further set of guides which can help you to diagnose certain issues with your Frenchie: