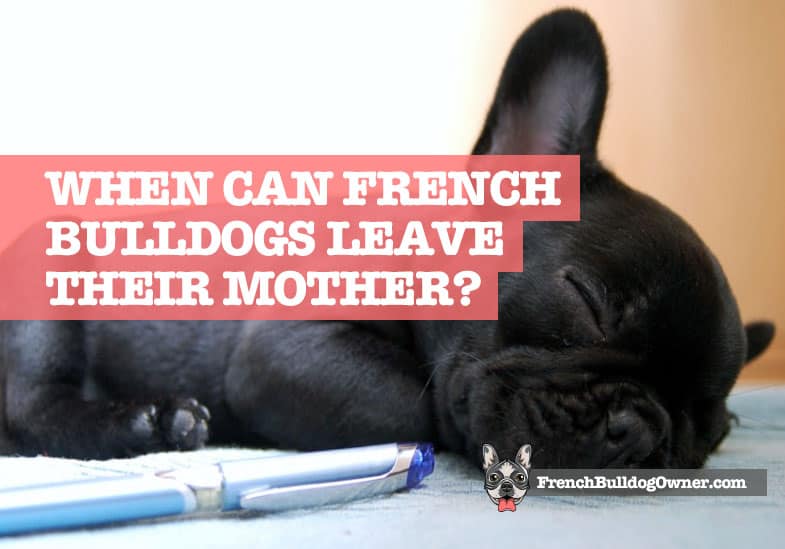 If you’re thinking about getting a Frenchie puppy, please make sure you’re making the right decision for both you and the pup. Once you’re completely sure you’ve got what it takes to handle the responsibility, you can start researching breeders. But there’s one hugely important factor; you mustn’t adopt a French Bulldog puppy before it’s ready to be separated and leave its mother.

When can Frenchies be separated from their mother?

French Bulldogs are no different to any other puppies. Yes, they are renowned as being a very emotional breed, but the age of separation is the same as any other dog.

The only time that you will see French Bulldog puppies being separated from their mother earlier than 8 weeks is if the mother has died or there are health problems.

In cases such as this, the Frenchie breeder will need to wean the puppy with a special bottle and milk formula, and a vet will most likely get involved due to worries over health, hygiene, and diet.

That doesn’t mean to say that French Bulldogs over 8 weeks can look after themselves. Nothing could be further from the truth. When you take a puppy of this age home, you will in effect become the mother.

Here’s just some of the fun (and stress) you will end up going through when you take your young French Bulldog home from the mother. I can’t re-iterate this enough; you need to make sure you’re making the right decision at it’s a huge commitment.

The law on taking puppies away from the mother

Frenchies are emotional breed and get quickly attached to their surroundings. Taking a very young puppy out its home and away from the mother too early can affect the dog’s behavioural and developmental growth. Possibly even their health.

This has been well documented and researched. In fact, in some European countries and certain states in the USA, it’s actually illegal to buy puppies younger than 8 weeks old.

For example, in the UK where we live, new laws have been established in the last couple of years.

“The sale of puppies under eight weeks old is to be made illegal under plans to crack down on so-called backstreet breeders and puppy farms. Smaller breeders as well as commercial breeders will have to meet a strict welfare criteria. Breeders who break the rules face an unlimited fine and up to six months in prison.” (source: The Telegraph)

In the United States, each state has their own rules for the age you can take a puppy away from the mother. You can see those listed below and read more detail on the Animal Law website:

Now that you know when French Bulldogs can leave their mother, I wanted to dip a little bit into how the develop, to give you a deeper understanding of this amazing breed. It will give you some insight into how critical early care is with the mother, and how these things influence Frenchie overall growth.

Weeks 1 and 2: confusion and lack of senses

Newly born Frenchies are very tiny and a lot smaller than many other breeds. All they can do is to feed from the mother, sleep and poop.

In the two weeks of their existence, they can’t even see, and have limited hearing and a lack of a developed smell. If you a French Bulldog puppy leaves the mother at this stage, it will almost certainly die.

Handy Hint: French Bulldogs with white fur are more likely to develop hearing loss problems. Read this guide to deafness to get the inside track.

In this first two weeks they adjust and respond to their surroundings, slowly opening their eyes to respond to light, crawl a little, and of course with the help of their mothers, instinctively try to feed.

But mostly, they will sleep, which is very important for them at this stage.

Week 3: interacting with their environment

In their third week, French Bulldog puppies begin to develop their senses. Like other dog breeds, they start to explore their surroundings. They rarely sleep during this period and are seen running throughout the day.

At this stage, they start recognizing humans, and can start to make strong associations and emotional connections. They might even get excited to see the breeder walking in.

I wouldn’t recommend letting too many people have access to them at this point. They are still in the early part of their development – both the puppies and mother could become distressed with too much human interaction.

Any negativity at this point could affect the personalities of the whole litter, and in extreme cases can cause behavioural problems in the long term.

Keep strangers at bay and to keep the French Bulldog puppies close to their siblings and mother.

In this stage, Frenchies start developing stronger connections with their siblings; this is where their social development begins. They learn how to play with their brothers and sisters.

Also, at this point, the mother starts weaning them off the milk. They start learning how to become dogs at this time, with their mother being the teacher, role model, and guide.

At this point the breeder will start to introduce the puppies to food in addition to the mother’s milk.

Despite weaning having started, it’s still not recommended to separate a French Bulldog puppy from the mother and siblings – other than perhaps a few minutes for health checks and hygiene reasons.

Over the next 3 weeks, leading up to the age that a French Bulldog can leave its mother, it’s a huge aspect of their development. There are things happening during these weeks that mean it would be crazy to separate them.

During this stage, Frenchies can be nervous about almost anything. They’re still adjusting to the world around them; from people talking, to loud noises, or some random object they’ve just seen.

As they begin to notice things more carefully, the world can suddenly seem like a very big and scary place. It can be a complete sensory overload, hence the nervousness – but they will adapt over time.

Also, at this stage, they develop more control over their bowels and bladder and should be able to have a sounder sleep without waking up to pee all through the night.

As a side note, breeders can start training the French Bulldog puppies some very basic commands like, stay, sit, and so on.

Handy Hint: Learn how you can teach a French Bulldog puppy to sit with just a few simple to follow steps.

Then there’s the rebellion. You know how annoying and stressful teenagers can be? Frenchie puppies really are no different. As they become more independent, they will start to cause havoc.

They will also have a tendency to bite and chew everything in their sight. Coupled with their developing rebelliousness; they can become a real nuisance.

Weeks 8 to 9: French bulldogs can leave their mother

At this stage, Frenchies puppies can leave the mother and siblings and go to their new forever homes.

I’ve already explained how much of a commitment this is going be, and there are other blog posts I’ve written which will give you some ideas on what to expect. Here’s a selection of them:

We’ve owned Claude since he was around 8 or 9 weeks old. We met with the breeder, did our research, and made sure that it was the right time for our chosen pup to leave the mother.

I can’t stress this enough; please don’t buy a French Bulldog younger than 8 weeks old. This is way too early for them to leave their mother and get separated.