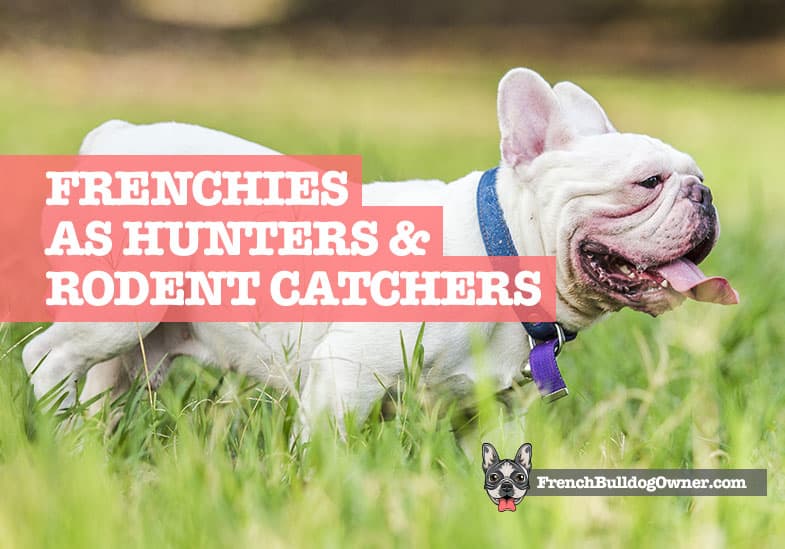 If you have a rodent problem, a mice infestation, live in the countryside, or are a fan of hunting, you might wonder whether a French Bulldog is the breed for you.

There is certainly some confusion over French Bulldogs being good rat catchers and hunters. It’s understandable why too as in the 1800s, Frenchies came about after Toy Bulldogs and terrier ratter dogs were cross bred.

The modern-day French Bulldog is now bred to be a companion dog. The hunting and rat catching parts of their genetics have been diluted so much that you won’t find anyone using a Frenchie for hunting. They simply aren’t up to the task.

However, that’s not to say that French Bulldogs can’t be good ratters. Our own dog Claude loves to chase squirrels, mice, birds, and small rodents. He can’t help himself.

He’s never actually caught anything mind! But that’s not the case with some Frenchies. Many of them will be great at catching mice and keep a rat population down.

Some Frenchies will be very good at catching mice. But it does depend a lot on the personality and fitness of the French Bulldog. Overall, this breed is hyper alert to rodents and at the most basic level will keep rodents away from your home.

We used to live in the countryside and had lots of mice in our garden and shed that would occasionally try to get into our home. Our cat did an excellent job of keeping the rat population down, with a little helping hand from Claude the Frenchie.

Whilst we never saw our Frenchie catch a mouse, he was always alert to them and in partnership with our cat, stopped rodents from becoming a problem.

As I don’t hunt myself, and don’t know have any hunting friends to ask, I’ve had to think about what traits a French Bulldog rat hunter or hunting dog would need.

To figure this out I decided to look at what traits would make for a good hunting dog and then compare those back to a French Bulldog with my own personal score.

This is all personal opinion and scores based on owning a Frenchie.

Frenchies have a very good temperament, and are great as family dogs. How well that will transfer to hunting though is debatable.

Our Frenchie Claude gets easily distracted. Whilst he might start chasing a squirrel, his recall will be bad once he’s in the zone so may not work too well as a hunting companion.

Handy Hint: Are you struggling to get your Frenchie to come back when called? If so, check out this recall training guide.

Good hunting dogs need to be fearless. You don’t know what you’re going to come across when out in dense wooded areas.

Our Frenchie will sometimes be scared of his own shadow and will back off when confronted with another aggressive dog.

He is also scared of water. Frenchies cannot swim (find out more) so if you’re a fan of duck hunting, a French Bulldog definitely isn’t for you.

Mice, rabbits, rats, squirrels, and ducks all have one thing in common; they can all be fast and evasive. That means you need a dog that isn’t just quick, but also has the stamina to last for a long hunting trip.

Can French Bulldogs hunt with the stamina you would need? No, they won’t.

Whilst our Frenchie is very quick (see our Frenchie speed test using GPS and radar) he gets worn out after just 15 minutes of running around. He simply wouldn’t have the stamina to chase rats and rabbits for you.

Dogs with soft jaws are best for hunting birds and smaller animals. However, if it’s big prey you’re after, you will want a dog with a bigger bite strength.

I estimated the bite strength of a Frenchie in PSI and it’s very low on the scale compared to breeds such as retrievers. My estimate came in at 150 PSI.

Whilst that might be ok for a French Bulldog hunting rabbits and rats, it won’t cut it for larger targets.

A good hunting dog will need an exceptional sense of smell. Think of breeds such as Pointers, Springer Spaniels, German Shepherds, and Beagles.

Frenchies do have a good sense of smell, but nothing in comparison to the classic breeds used for hunting.

Ever wondered why Frenchies aren’t really used a service dogs? This is one of the main reasons; you will never see a French Bulldog being used a drug sniffer at airports!

Frenchies are intelligent. But that doesn’t necessarily mean they will be good at hunting or catching mice.

To give you an example, Claude loves chasing a ball. But will he ever give it back? No, he loves to keep hold of it and play the game of tug of war with it.

That’s probably just his character though, but overall Frenchies love to play to that senses of fun could very well get in the way of the serious hunting you want to do.

Hunting dogs should always have short coats. It helps them move through densely wooded areas and keep the noise down as they stalk their prey.

Frenchies have very short coats so this is one area where they will get a high score to be good at hunting.

A good rat hunter will need great hearing. But how do Frenchies score on this scale?

Overall, they have very good hearing however, part of the breed is particularly prone to hearing loss as they get older. You can see how hearing problems are common in Frenchies elsewhere on the blog.

So, to conclude on my test on the hunting capabilities of Frenchies:

Do French bulldogs hunt? French Bulldogs can hunt to a degree. But they certainly are not a breed you should consider of you want a good hunting dog. Whilst they will love the thrill of the chase and the game of hunting, they don’t have the characteristics that a good hunting dog needs to be successful.

But what about Frenchies as rat catchers and hunters? I’ve already spoken about the origins of the breed and how French Bulldogs have ratter heritage but let’s take a closer look.

If you’re expecting your French Bulldog to hunt rats down on your property you might be disappointed. Choose a large cat or a specific dog hunting breed instead.

Just as a side note, you might have previously read my blog post about French Bulldogs on the Titanic. It explains how this breed will forever be linked with this maritime tragedy.

It got me thinking that perhaps Frenchies could have been used to keep the rat and mice population down when the ship was at sea.

Unfortunately, I cannot find any evidence to back this up. I did find a reference to a cat called Jenny who was kept on the Titanic to help keep the rodent population down though (see source).

What do French Bulldogs hunt then?

If we use the term “hunt” loosely, then from a personal perspective I have seen Claude the Frenchie chase mice, rabbits, rats, and squirrels when we’re out walking.

But that doesn’t mean he’s good at chasing or hunting rodents. He’s never actually caught anything!

If you’re looking for a dog to help chase mice, hunt rats, and keep a rodent population down then a Frenchie really isn’t for you. Yes, Frenchies can catch rats and mice, but our own dog has proven to be completely useless at doing so.

Whilst our own Frenchie has helped to keep rodents away from our house, I’ve never seen him catch any mice after chasing them – with that in mind, I think a lot of this will be down to personality, temperament, and fitness.

Your Frenchie could be a good ratter… but you won’t know until you’re in the situation.