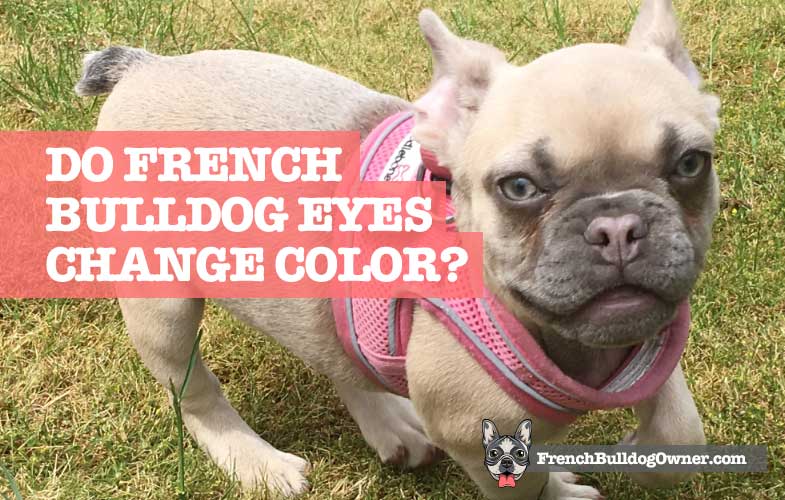 Last week we had we had a Frenchie puppy come over to play with our own Frenchie, Claude. She is a 14-week old French Bulldog puppy with the bluest of eyes. They are stunningly beautiful as you can see in the photos lower down the page. I remarked to her owner how blue the eyes were and asked whether they would change color at all.

Once the puppy’s owner had reminded me of this fact, it actually made me remember how blue Claude’s eyes were when he was a puppy. I’d actually forgotten this and went back through some old photos to double-check.

You can see a still I took from an old video of Claude below. This photo shows how blue his eyes were when he was younger. Regular readers of French Bulldog Owner will know they are now very much brown!

So, what can you expect with your own Frenchie? Well, all French Bulldog puppies are born with blue eyes. They will either be completely blue, or slightly different shades including grey, green, and brown flecks.

At about 10 weeks old, the Frenchie eyes will start to change color. It will be a gradual process, and most will go through some shades of blue, green-grey, and then to the standard brown color.

In fact, there’s a photo below of our friend’s puppy at 14 weeks chilling out with Claude. This photo doesn’t really her eyes justice. In this shot they look more of a grey-green color which means they are going through the change to brown.

However, in certain lights they do still appear to be very blue.

Will my Frenchie’s eye stay blue?

In most cases they will eventually turn completely brown. However, there is an exception to this rule; blue fawn French Bulldogs.

This particular breed of Frenchie is very rare, being renowned for their colorings. They have a dilute gene which accounts for their coat color as well as their eyes.

Some blue Frenchies will keep the blue eye gene more than other dogs. It’s not always the case that every blue Frenchie will have blue or green eyes, but they will be the only type of this breed where you will see it through to adulthood.

What color are French Bulldog eyes?

Why do French Bulldogs have blue eyes?

I’ve already explained how puppies will be born with blue eyes, and also how the blue Frenchie can retain this color into adulthood.

However, if you notice that your French Bulldog’s eyes have changed to a blue color as an adult, where they were previously brown, it could be a warning sign of a bigger issue.

Sudden cloudy or blue eyes could be a health problem

If your adult Frenchie’s eye change color to look bluish or cloudy, it could mean there is an eye disease that needs treating.

There are certain eye diseases, some which are more serious than others, including:

If you notice your French Bulldog’s eye have changed color to a blue or cloudy appearance, please consult with your vet immediately.

Handy Hint: I’ve published a list of the 31 health problems that can afflict the French Bulldog breed. Read this guide to health issues and what to look out for.

Why are my French Bulldogs eyes red?

This is something you should also look out for, as it can be a sign of a health problem. Red eyes in a Frenchie could be:

If you are concerned, please read this overview which explains why your Frenchie has red eyes in more detail.

I hope you’ve enjoyed this overview to French Bulldog eye color changes, what they mean, why it happens, and what to look out for.

If you did enjoy this content, I would really appreciate you sharing it on your social media channels using the sharing icons and buttons below.