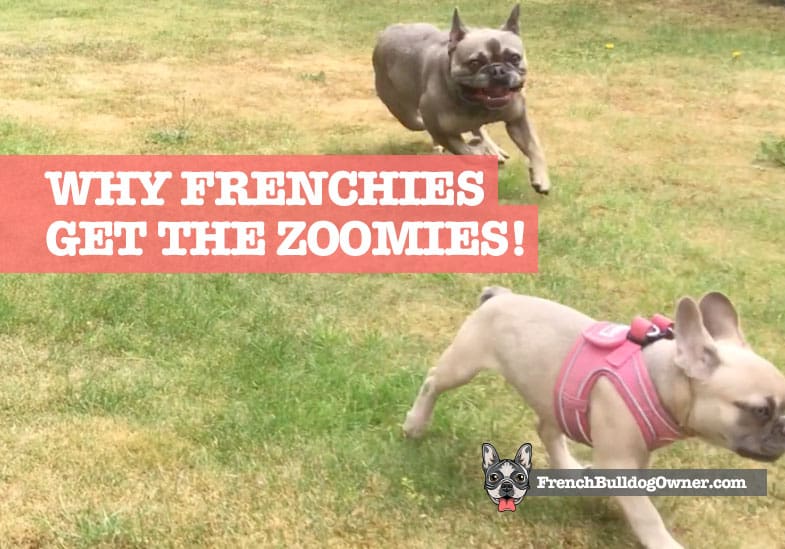 One of the funniest things about having a Frenchie is when they get what we call the zoomies and start running about like crazy. If you’re a new owner, the first time you see this it will blow your mind.

Our own French Bulldog get zoomies after a bath, late at, during play in the garden, after a poop, or sometimes with no rhyme or reason whatsoever. At least that’s what we used to think until I researched why French Bulldogs run around like crazy, aka, the zoomies.

Why do French Bulldogs get the zoomies? French Bulldogs will run around like crazy with the zoomies to relieve pent up energy or even stress. It’s perfectly normal behavior and even has a name: FRAPS, or frenetic random activity periods.

Animal behaviorists are unable to provide a scientific explanation for the zoomies, but there is a common observation. Dogs, and French Bulldogs get the zoomies in a variety of scenarios, typically when aroused by excitement, pent up energy that needs to be released, or even stress.

Wikipedia describes the zoomies as:

“Frenetic random activity periods (FRAPs), also called the zoomies or midnight crazies, are random bursts of energy occurring in dogs and cats in which they run frenetically, commonly in circles. They usually last a few minutes or less. It is not known what causes animals to engage in FRAPs.”

It’s very normal, and it’s observed in dogs of all ages, and even cats.

Our own French Bulldog Claude gets the zoomies in a variety of situations. When he does, he will like crazy, running from one end of the house to another, jumping on beds and couches with furious bursts of speed.

When outdoors he will run fast laps of our garden with sudden direction changes and wild spins. It even looks like his back end is going faster than his front end; it’s hilarious.

The times we’ve seen our French Bulldog gets the zoomies include:

Here are my guesses on why this happens…

My Frenchie zoomies after a bath

Claude the Frenchie hates being dried with a towel so as soon as we get him out of the bath, he’s off like a shot running around the house. He will run, look at us, put his head to the floor, then take off again the minute we take one step towards him.

As he’s running, all the hair and water from his bath is flying all over the house.

I assume he gets the zoomies for two reasons; one he hates towels, and two he runs like crazy to shake all the water off his body.

My Frenchie zoomies after eating

I’ve never met a French Bulldog who wasn’t obsessed with food, so can only assume that the heady mix of a full belly and all that excitement results in a classic case of the zoomies.

My Frenchie zoomies before bed

There’s a theory that dogs will FRAP to release any pent-up energy they have. If your Frenchie is running around like crazy before bedtime it could be get rid of all the energy not used during the day so he can get a decent night’s sleep.

My Frenchie zoomies after pooping

Despite research, I can’t find a satisfactory explanation to why French Bulldogs get the zoomies after pooping, other than; it’s a massive relief.

It could be that your dog has been cooped up at home needing a poop, so when it comes it’s like a big release of something or other!

Are the zoomies dangerous?

As long as your French Bulldog isn’t being aggressive whilst running around like crazy, and your dog is safe from harm, then I don’t think there’s anything to worry about with the zoomies.

Despite how fast and frenetic your Frenchie runs like crazy, they will rarely injury themselves as they seem to know the dimensions of their body and the space around them.

The only exception to the zoomies being ok would be if the crazy spins are stress related or your Frenchie isn’t getting enough exercise and mental stimulation. Only you can judge whether that’s the case, but if you need guidance here’s how much Frenchies need to be walked each day.

There are also people more educated than me about dogs who have written about this interesting behavior. Dr Marc Bekoff, a professor of Ecology and Evolutionary Biology at the University of Colorado (see his profile) explains on the Psychology Today website that it’s ok for dogs to have the zoomies.

When asked whether it was ok for dogs to do the zoomies or FRAPS, he said:

“My answer is always something like, yep, as long as you’re sure that she or he won’t harm themselves or others and it’s done in a safe area. And, it’s essential for a human to know their dog and to remain alert when either the dog or other individuals are in the path of a frapper fugue and potentially can be harmed.” (view source)

From what I can find, scientists have no cast-iron explanation for why dogs run around like crazy and get the zoomies. So, all we can do is make the assumptions as outlined in this post, and they make a lot of sense to me.

Regardless, providing your Frenchie is having fun whilst doing the crazy runs, it’s not going to harm him.

If you want to prevent it, I can only recommend that you get your Frenchie more active both mentally and physically. Here are some Frenchie toys I can recommend which might help.

Whilst you’re here, possibly for the first time, I wanted to share with you some other interesting Frenchie articles:

link to Do French Bulldogs Have Bad Eyesight & How Far Can They See?

Continue Reading
link to Can French Bulldogs See in the Dark? (Photos of How They See!)

I’ve blogged in the past before about how Claude Frenchie sleeps down in the kitchen with our cat at night, usually with a small lamp switched on in the corner. However, last week I forgot to turn...