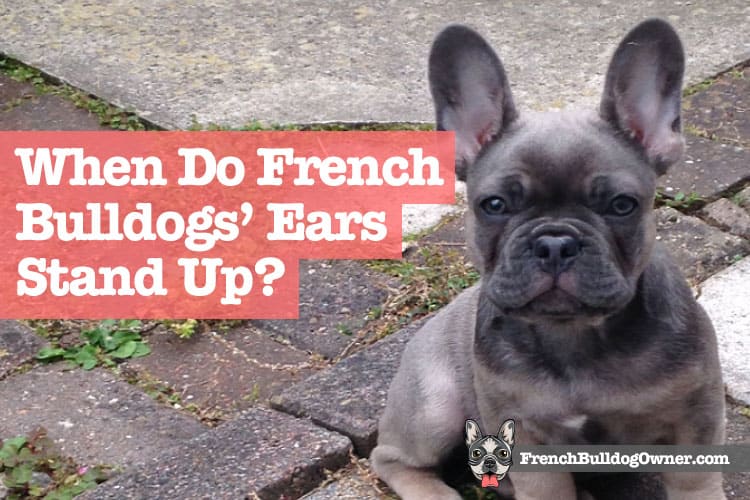 French bulldogs aren’t born with their ears standing up. In fact, over the first few weeks and months of their lives, their ears can almost have a life of their own! Don’t worry if you don’t see really pointy ears in your puppy straight from the off. Here’s when you can expect your French bulldog’s ears to stand up and why French Bulldog ears being down can be temporary.

When do French Bulldogs’ ears stand up? In the majority of cases, French bulldog ears will stand up, perk up, and stay up straight between 5 and 15 weeks of them being born, and sometimes not both at the same time. Once the puppy has finished teething, their once down ears should both be fully erect. However, in some cases, ears won’t stand up until as late as 8 months.

Why are my French Bulldogs ears down still?

That’s my very generic response to how long does it take for French bulldog ears to stand up. If your puppy’s ears aren’t erect yet, or are all over the place, I don’t want you to panic! French Bulldogs with down ears are perfectly normal.

Before you continue reading, there are some examples where a Frenchie’s ears stay down and never went up. As I’ve already mentioned, it’s not a problem and in fact, it gives your Frenchie lots of character. It doesn’t mean they aren’t healthy or normal… it’s just the way they are, so love them for their ears that never went up.

But, if you want to find out more about your French Bulldog’s down ears, and at what age their ears should go up in the majority of cases, please read on.

When do French Bulldog ears go up?

Below you can read more detail on the timelines, what to if your French bulldog’s ears aren’t standing up by the age they should be, and how you can possibly even encourage them to get to the traditional pointy shape quicker.

When do French bulldog ears stand up: what to expect?

Firstly, if you are looking at very young Frenchie puppies, you will probably see that their ears are down. That’s how they are born, but in most cases, they will be standing up by the time you take them home from the breeder.

It’s common for French bulldog puppies to be taken away from their mother at 8 weeks old. By that point, their ears should be standing up, because they have gone through the teething process.

By what does it have to do with teething?

During the early stages of the puppy’s life, his body is using all the calcium for teething, meaning those bat ears can go up, go down, not go up at all, go up one at a time, go down, fall back, go droopy… basically those ears are going to dance around until the calcium can be evenly distributed throughout the body.

This is why people will often talk about yoghurt helping a Frenchie’s ears stand up due to the calcium content, but I will come onto that little hack further down the page.

Handy Hint: Teething can be very painful for a Frenchie puppy. I’ve developed a guide to teething which gives you help on when it starts, when it stops, and how you can help reduce their discomfort.

What age will a French bulldog’s ears stand up?

There is no hard and fast rule here, as each puppy will develop differently. However, as a general rule of thumb, between 5 and 15 weeks of age their ears should be able to stand independently in that loveable bat ear fashion you’re so familiar with.

However, it’s not always the case.

Some common things I hear from Frenchie owners include:

This is entirely natural, as the ears will behave very erratically during the teething period until such time they settle into the erect position.

I spoke to one French bulldog owner who told their dogs ears didn’t stand up by themselves until their dog was 7 months old. That’s really unusual though.

I also read on a forum a post from an owner whose Frenchie still had droopy ears at age 10 months. The truth is, at this point if the ears aren’t erect, they never will be (but that will make for a super-cute look!)

My advice is to keep an eye on those ears. If by 7 or 8 weeks they aren’t showing signs that they can stand up by themselves, you might need to give them a little bit of help – and those methods are outlined below.

Handy Hint: When buying a Frenchie puppy always insist on having hearing test results. White Frenchies can suffer from hearing loss from birth and it can be very challenging to deal with. You can read more in this guide to Frenchie hearing problems.

How to make French bulldog ears stand up

If you can catch signs of the ears not standing up by themselves early, and by that, I mean at around 7 or 8 weeks of age, there is one common thing you can do – taping.

This is what the breeders do. I am not a breeder, and as far as I can ascertain, it’s not a cruel process if done correctly, but please do your own research first.

Here’s how the breeders tape French bulldog ears to stand up by themselves:

In most cases, this 5-day period of taping French bulldog ears should be enough if they are ready to stand up erect by themselves.

If you don’t get the results you expect, go through the process for another 5 days. If after that, you don’t get erect ears, leave them.

Nature will take its course, whether that’s with standing up ears, droopy ears, or ears that fall back – they are all as adorable as each other!

Will yoghurt, milk, and cheese help the ears stand up?

You might have read on web forums that things like yoghurt, milk, and cottage cheese can help encourage a Frenchie puppy’s ears to stand up.

The reason people suggest this, is due to the calcium content in these foods. As I mentioned earlier, French bulldog ears don’t tend to stand up by themselves during teething, as all calcium is being used in the teeth.

Handy Hint: We just published a guide for Frenchie owners wanting to feed their dog cheese. Click here to see the pros, cons, and which cheeses should be avoided.

The theory of using yoghurt and other calcium heavy foods is that it will compensate for this, and help the ears go erect quicker.

But does it work?

There is no scientific data to suggest it does, as it’s purely anecdotal based on the thought that the more calcium the better.

If you do decide to try this, be careful as rich foods like this can upset the puppy’s stomach.

Handy hint: Apparently, the best cheese for a young Frenchie puppy is goat’s cheese. It’s easier for them to digest.

When we got Claude as a puppy, his ears were really pointy and erect (as you can see in the photos) so never had to consider any of these points, so had to do a lot of research into this help guide.

Whilst researching the topic of taping French bulldog ears, what age they stand up, and so on, I found some related queries on web forums which I will attempt to answer below.

As discussed further up, this can happen when they are teething. In fact, one day his ears could be up, next day they could be down.

If by 8 weeks they have shown no signs of standing up, then you could try more calcium in the diet, or tape the ears if you feel comfortable taking that approach.

Again, this is common during the teething period. In most cases they should pop back up from the drooping position once teething has finished.

Did You Know: Your Frenchie will position his ears back when he is scared or frightened. You can read more about this in my blog post about the meaning of French Bulldogs’ ears being back.

Watching your Frenchie’s ears develop in their early stages can be really funny. As I’ve mentioned, they can be up one day, and down the next, and sometimes in random orders and configurations.

The key is not to panic. In most dogs, their ears will stand up by themselves by 15 weeks at the latest.

The bottom line is; once your dog has finished teething, in the majority of Frenchies, their ears will stand up independently in the bat ear pointed fashion that the breed are known for.