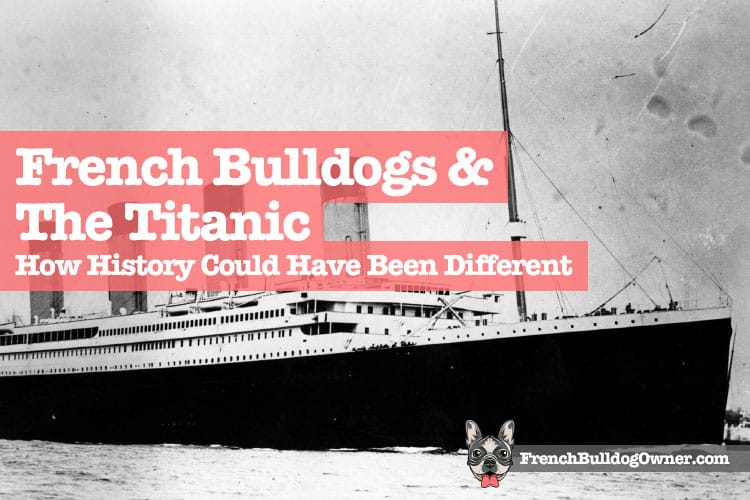 Over a hundred years ago, the Titanic sank with 1,503 lives lost. Whilst 705 people did survive, a lesser known statistic is about the animals on board, including birds, chickens, cats (and probably a few rats too), plus 12 dogs.

One of those twelve dogs was a Frenchie.

Sadly, he did not make it when the life boats were launched and went down with the ship into the freezing depths of the North Atlantic Ocean.

However, of the twelve dogs on board The Titanic, three did actually survive; one Pekingese and couple of Pomeranians.

The majority of the dogs on the ship belonged to rich Americans who were travelling in first class. They had to even pay for a ticket for their pup, with the fare costing the same as it would for a child.

But you’re here to find out more about the French Bulldog on The Titanic, so let’s tell you a little bit more about him.

Who was the French Bulldog on The Titanic?

His name was Gamin de Pycombe, and he was a brindle French Bulldog owned by a 27-year old US banker called Robert Daniel.

Gamin the Frenchie was born in January of 1910 so was just two years old when he drowned.

He was sired by CH Charlemagne of Amersham, being bred in the Taplow kennel by Gwendoline Romilly.

CH Charlemagne was French import to the United Kingdom and went on to become the UK’s first pied champion French Bulldog, as well as being a champion in both the United States and Britain.

Whilst there were dog kennels on The Titanic, Gamin de Pycombe is said to have stayed in Robert Daniel’s for the duration of the trip. If the famous Frenchie had been in the kennels, he might have stood a chance of survival, as stories emerged that someone released the kennelled dogs.

However, we have no real way of knowing what his chances of survival would have been, as of the three dogs who did survive, records indicate that their owners smuggled them onto the life boats under their jackets.

There is some evidence in the historical accounts which relate the following story about Gamin de Pycombe from a passenger named Edith Russell.

She is said to have told news reporters years later than Gamin was in Mr. Daniel’s cabin near to her, and she could hear the Frenchie whimpering as she made her way to the upper deck after the iceberg was hit. Because she heard the dog crying, she opened the cabin door and calmed him down, putting him to bed.

In 1966, Edith Russell was interviewed and said:

“The dog was scared so I petted him and laid him down in his bed. He was very obedient and sat there and looked at me sweetly as I closed the door. I did not know then that we were in any great danger or else I would have taken him with me.”

Another surviving passenger later reported having seen a French Bulldog swimming in the ocean, so apparently someone did let Gamin de Pycombe out of his owner’s cabin.

French Bulldogs can’t swim (but you can teach them with a life jacket), so even if aspect of the tragedy has an element of truth to it, Gamin would not have survived in the water for more than a couple of minutes.

What about the Frenchie in James Cameron’s Titanic movie?

If you’ve seen the famous movie about The Titanic, you might notice a scene early on where you see a French Bulldog boarding the boat.

Cameron is said to have filmed a scene showing the doomed dogs during the sinking but decided to take this out of the final cut of the movie.

Though moviegoers can watch a movie showing people drowning, it’s likely that having to watch dogs drowning would have cut down on attendance.

What happened to the Frenchie’s owner?

Robert Daniel did survive and managed to escape The Titanic in lifeboat number six. He is said to have met his future wife in the lifeboat, another American named Eloise Smith (Mrs. Lucien Hughes) – her husband had drowned during the sinking.

Their marriage was not to last though, and Mr. Daniel went on to marry two more times, eventually settling in Richmond, Virginia. He went on to become a state senator, passing away aged 56 in 1940.

One of the show’s judges on the day was Samuel Goldenberg who had survived the sinking. He had boarded the Titanic at Cherbourg in order to get to New York to be a judge.

He was a famous French Bulldog breeder and had previously imported a young Frenchie called Nellcote Gamin into the United States in 1904.

In the 1926 book “The French Bulldog”, Nellcote Gamin was described as being “the cornerstone in the establishment of French Bulldogs in America.”

When the Titanic sank, Samuel and his wife Nella survived and arrived in New York on the Carpathia on April 18, which gave him only one day to rest and recuperate before judging the Specialty at the Waldorf-Astoria.

And to make things even weirder there was a press article in the New York Times on the 24thof April which had a story about the only piece of luggage that was retrieved from The Titanic.

Guess who it belonged to?

Yes, that’s right; Samuel Goldenberg – it was his canvas satchel.

Did You Know? There was also a French Bulldog who served the military in World War 1? Click here to find out about Mutt the war-time Frenchie.