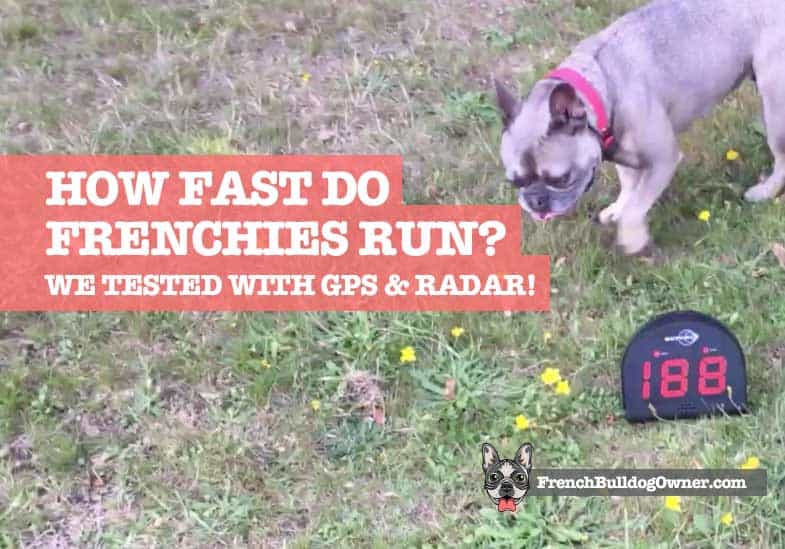 Have you ever wondered how fast a French Bulldog can run and what their top speed would be? My son and I had this discussion the other day so decided the best way to find out was to do a speed test at our local park using a few different methods.

You can see the short answer to the speed of a French Bulldog below, followed by our video showing how we figured it all out.

How fast can a French Bulldog run? French Bulldogs can run as fast as 17 mph. This top speed was achieved by Claude the Frenchie in the UK on the 13th of August 2019 using GPS and radar speed tracking.

In the video here you can see exactly how we tracked a French Bulldog’s top speed of 17 miles per hour. We used two different methods; a GPS sports watch and a sports radar machine.

Watch the video experiment below!

You can’t go wrong with Garmin GPS sports watches. They have a great reputation. But how well do they track the speed of a French Bulldog and will it let us understand how fast our Frenchie runs?

We strapped the Garmin to Claude’s collar at the start of the speed test and then threw a stick for him to chase at the park. (You can get the same watch on Amazon)

We conducted this experiment a few times over a couple of days – we didn’t want to wear Claude out. The quickest pace our Frenchie reached (according to Garmin GPS) was 22.9 kilometres per hour. That converts to 14.2 miles per hour.

Was it accurate though?

I am not convinced to be honest, as Garmin themselves say that the speed accuracy can be compromised if the GPS doesn’t have a clear view of the sky.

When Claude was running with the GPS watch strapped to his collar, it was bouncing around a lot, and sometimes would re-position to hang under his head.

Our next test was using a sports radar machine (view them on Amazon). Again, how accurate these things are is open to interpretation – and let’s be honest, they aren’t designed for tracking how fast a French Bulldog (or any dog for that matter) can run.

It was fun though!

We set the radar up on the ground and tested my son running past it first. Once we were certain it was registering a speed it was time to test it out with our dog.

On the first few attempts we threw a stick past it to see how fast it said our Frenchie was going.

What we then tried to do was throw the stick high and behind the radar to eliminate that issue. We didn’t have a lot of success with Claude though as he kept running behind the radar rather then keeping on track.

We then figured out that if we pretended to throw a stick, we could eliminate any risk of the stick triggering the speed radar readings.

After running these tests we found that the top speed for our French Bulldog was registered at 17 miles per hour on two occasions.

How fast can your Frenchie run?

We would love to hear from other Frenchie owners who have performed similar tests. It’s all in the name of fun!

If you are going to try it, please respond to our YouTube video and tell us what speed times you tracked in the comments, and then post your own video evidence.

What we will then do is update this blog post with a league table of the fastest French Bulldogs in the world, so please leave your dog’s name, location, and top speed.

We’ve started the ranking table below.

So far we don’t have any challengers, so we have to assume that Claude is the fastest French Bulldog in the world… unless you can tell us differently and offer proof!

Be Careful: French Bulldogs do not cope very well with overly strenuous activities. If you are going to perform a similar test, please do over-exert them, and only do this for 10 minutes. We spread our tests over a few days, and you should too!

How does Claude’s top speed compare to other dog breeds?

Whilst 17 miles per hour might sound very fast, it’s not when compared to other dog breeds. Below you can see top speeds of some popular breeds that I found on the Internet for comparison purposes:

We hope you enjoyed our tests to find out how fast French Bulldogs can run. It wasn’t the most scientific of experiments, but we do believe it’s the first test of its kind ever done before. We would love to hear from you if you have done a similar speed test, so please head over to YouTube and leave a comment so we can compare your scores.

We will then update the Frenchie top speed league table above with your dog’s record… who will beat Claude’s (unofficial) world record? Only time will tell.

As it stands, he is the (unofficial) world record holder as is the fastest French Bulldog in the world… we reckon!