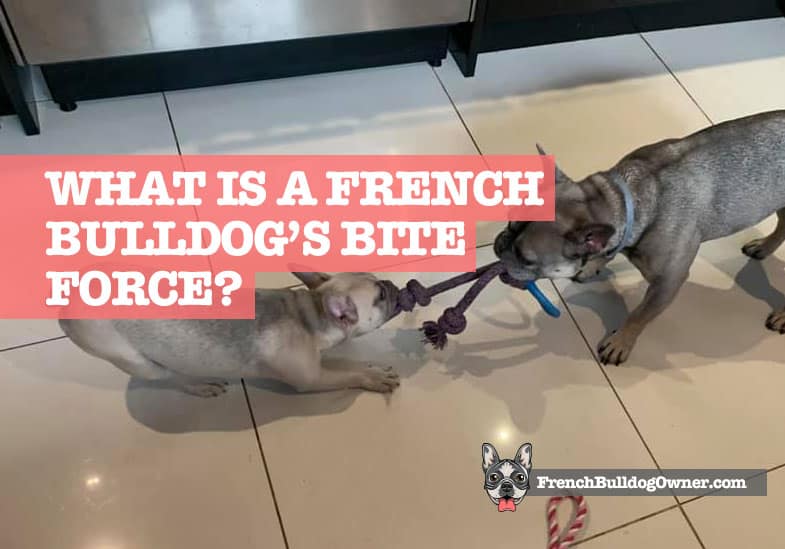 Claude has never bitten us, or anyone else for that matter. He will give the occasional nip when playing, but he is not aggressive at all. However, when he does play, especially tug of war, you can see just how much strength he has in his jaws. This made me wonder what the French Bulldog bite force strength was in PSI (pounds per square inch) and how strong the bite of a French Bulldog is… so I did a little investigation.

How strong is a French Bulldog’s bite?

What’s a French Bulldog’s bite pressure? The bite force pressure of a French Bulldog is estimated to be between 180 and 230 PSI. My estimate on Frenchie bite PSI has been made by taking the recorded studies of similar sized dog breeds and giving a range of strength in pounds.

It’s actually very hard to place an accurate measurement on a French Bulldog’s bite force in pounds. As far as I can find out, nobody has ever actually recorded it in a study – which is why I have had to estimate it.

What does PSI mean in bite force? PSI stands for “pounds per square inch” and is the unit by which dog bite pressure is measured. It’s the amount of pressure that is applied to one square inch of a pound.

I know that our own Frenchie Claude has a very strong jaw and bite. When we play tug of war with a rope, it’s actually possible for me to lift him off the floor. The only way I can get him to release his bite on the rope is to twist it and pull it back across the top of his head.

He’s got a very strong bite, and I am sure his is very typical of French Bulldog bite PSI.

However, there have plenty of studies around more aggressive breeds and their bite pressure (I list those further down the page), which is why I’ve had to estimate a Frenchie’s bite force for myself.

I did this by looking at the bite pressure in PSI of similar sized dog breeds including smaller bulldogs and terriers, and then put my own estimate together which I referenced towards the top of this page.

But, even in the studies that have been done with other dog breeds, you cannot completely rely on the statistics on bite force pressure. This is because it’s really hard to calculate the pressure as dogs will bite at a different strength each time.

And most of the studies into dog bite pressure conducted the tests whilst the breeds were under an anaesthetic… which is why I don’t 100% rely on the data I’ve found, but it’s all we’ve got to work with!

Did You Know? Humans have an average bite pressure of 120 PSI, with some adult males being able to bite down at a strength of 150 PSI.

Why dog bite force PSI is hard to measure accurately

The reason why the data you see online can’t always be 100% relied upon is due to the way in which dog bite strength is measured. Most of the PSI measurements you read on other websites will be a given average for the dog.

However, this can be varied as you can’t really say to a dog “bite as hard as you can please”. The research has found that the measured PSI will change depending on:

The bottom line is; dogs will only bite at their hardest when they are being provoked. In many of the studies conducted, the dogs had been placed under a general anaesthesia, so there is no way that a truly accurate reading can be made.

The shape and size of their jaws and head is also a large factor, as it helps to determine how much force the dog can apply to the bite.

What dog breeds have the strongest bite pressure in PSI?

Below you can see a list of what are said to be the top 20 dog breeds according to how much pressure they can apply with their jaw.

As you can, these mutts have a huge amount of pressure in their bites compared to that of a French Bulldog.

Whilst French Bulldogs can give quite a nasty bite and do have strong jaws, their bite pressure isn’t one of the highest compared to other dog breeds. Dogs with larger heads will have a stronger bite.

However, the majority of Frenchies are non-aggressive, and are renowned as being very happy dogs who would rather play than fight. If you own a Frenchie, here’s a guide as to how you can tell if they are happy or not.

Handy Hint: You might also be interested in a recent training guide I developed which explains how you can stop your Frenchie puppy from biting you with 13 proven methods.