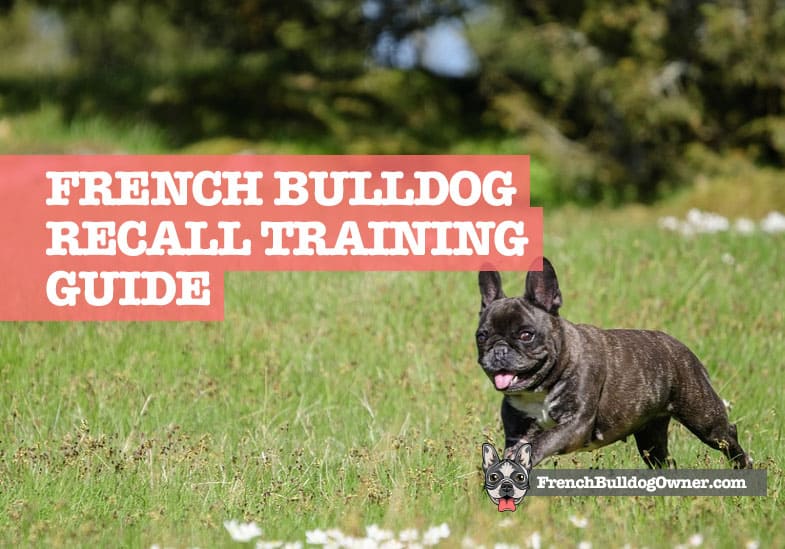 French Bulldog’s are naturally curious. Coupled with their stubborn nature, this can result in it being very hard sometimes to train them to come back and properly obey recall commands. Of all the training we did with our Frenchie Claude, recall was probably the one that took the longest to crack (possibly with the exception to toilet training).

If I am completely honest with you, it wasn’t until Claude was out of his puppy phase and around 12 months old when was finally completely obedient with recall… and even now he has his odd moments of not coming back – but that’s rare. You might be able to get it cracked way before that.

In this guide I wanted to share with you how I taught our French Bulldog to come to me, not run away, and 99% of the time properly obey to a recall command.

Lower down the page I even have a game you can play with your Frenchie if he refuses to come when called – which works really well with this breed. It’s basically a way of tricking them into coming back to you.

If you have a young puppy you want to recall train, or perhaps have a stubborn French Bulldog who won’t come when called, follow these steps – they are all based on personal and real-life experience with our own boy Claude.

You will need a longer leash than normal (here’s one on Amazon) and a plentiful supply of doggy treats. You should also already have mastered the sit command training, and teaching them how to stay, as this goes hand in hand with recall training.

French Bulldog recall training is best started off either in your own backyard and garden. If you don’t have your own private space, then do it at a dog park. Just make sure it’s at a quiet time where there are no distractions or noises such as kids and other dogs.

1. Sit your Frenchie down

With the long leash attached, get your Frenchie to sit and stay. Maintain eye contact with him, and slowly walk backwards a few paces.

Don’t rush this or act excited, as your Frenchie’s natural reaction will be to run up towards you if he thinks there’s a game about to start.

Once you have stepped a few paces back, crouch or squat to the ground. Frenchies are more inclined to recall and come to you when you’re in this position. I don’t know why, they just do.

As you are crouched down, say the “come” command or your chosen recall word, but with an element of excitement in your voice. It’s better to use a recall word, rather than your Frenchie’s name.

Handy Hint: Calling your Frenchie’s name should only be used to attract your dog’s attention. There will be times when you don’t want your Frenchie to come running back to you, but you just want him to look at you – this is why the distinction between a “come” command and the dog’s name should be clear.

When your Frenchie comes to you, tell him to sit, offer him a treat and shower him with praise. We want to cement in his mind that being recalled to you is a positive, not a negative. This reinforces the positive and obedient behavior.

Just don’t scold him if he doesn’t do as you want. You want him to come to you because he loves and trusts you – the way you use body language and your tone of voice is key here.

3. Repeat the process and extend the leash length

Repeat the process 4 to 5 times in the one session. The next day, pick the training up again, but start extending out the leash to several meters rather than shorter distances.

If your Frenchie doesn’t start to walk or run towards you, pull on the leash a little. I don’t mean you drag them as that will have negative connotations, but rather give a small tug to get their attention as you say your “come” command.

French Bulldogs, or any dog for that matter, don’t respond well to intensive training. Just like us, they will get bored and soon find something better to do.

It’s best to keep the recall training sessions short and to the point. I would recommend only trying the steps above 4 to 5 times each day until it starts to become second nature.

5. Play with your Frenchie after training

To further reinforce your Frenchie’s good work, always spend some time playing with them after any training session.

What this does is let your dog believe that a training session is always the precursor to fun time. I would always start off our day at the local park with a training session first, then afterwards we get the ball out for the fun part.

Handy Hint: If you want to get more from your playtime with your Frenchie, please do check out what I believe to be the best toys and games they love to play.

6. Be consistent with your “come” command

If you have family and friends who also look after your Frenchie, make sure that they use the exact same “come” command or recall word as you do.

7. Test their recall off of the leash

If you are happy that your French Bulldog comes back when you call him, it’s time to try recall commands when they are off the leash.

Do not let your Frenchie off the leash until you are confident that his recall consistently works, and he will come back when you ask him.

With the off the leash tests, I don’t recommend you do this in a public place, but instead in an enclosed area such as a garden or yard.

Once you and your Frenchie have cracked the recall training, it’s time to go test it out in a public setting. Good luck!

More ways you can train your Frenchie to come when called

Your French Bulldog won’t obey recall 100% of the time. After all, there are plenty of new smells and distractions in the world which are always going to be far more interesting.

With Claude I’ve learned a few things I can do when he’s stubborn or distracted.

For example, Claude loves playing ball and fetching sticks. Since he was a puppy, he has learned what the two words “stick” and “ball” mean. That means I have two excellent fall-back words to use if he refuses to come back to me.

All I need to do is shout either of those two words and he soon comes bounding back to me in super quick time.

If you know there’s one word that your Frenchie associates with something he loves, then it’s a great way to trick them into returning to you. Try it out next time you’re out on a walk… but don’t overuse it – he will get used to your trickery!

If you have a clear line of sight and can see your Frenchie, but he still refuses to come to you when called, then there’s neat tactic you can use. But you need to be able to catch his eye first… it’s all to do with turning the whole thing into a game.

The running away game

There have been times when Claude has been so pre-occupied with other dogs at the park when I’ve struggled to get him to recall. By turning the process into a chasing game, I’ve managed to get him to come back immediately.

Here’s how to do it.

Another similar recall success I saw on social media was by an owner who would pretend they had found something interesting on the ground. By crouching down on the floor, pretending to pick something up, and making some excitable noises, it can also encourage your Frenchie to come running back to you.

With either method, reward your Frenchie with praise once he’s back by your side.

Handy Hint: Try not to chase after your Frenchie if he runs away (they can run very fast). Whilst tempting, this can work in the opposite way where the game becomes one of him running away from you, rather than what we want, which is him to come back to you.

Every morning, Claude and I will walk through the local woods near to our house. This area is a hive of activity for squirrels and birds that he loves to chase and hunt (Frenchies can be good hunters).

Whilst the majority of the time this doesn’t present a problem, there are times where he will pelt off after a squirrel into the dense thickets.

There have been a couple of occasions where I’ve had heart-stopping moments and thought I had lost him.

Despite me calling his name, whistling, and shouting his favorite words like “stick” and “ball” there were 5 minutes of panic as he simply didn’t come back.

The key here is to not panic.

What I do is stay in the last place that he saw me. I am of the mindset that he will come back, and eventually your calls will get through to him.

I think the worst thing you can do if you are calling your French Bulldog and he isn’t coming back is to go try find him. Frenchies are quite smart and will be able to hear you for a long, long way off, so should return to you eventually.

Teaching your Frenchie how to come back is one of the most critical pieces of training you need to master as a responsible owner.

Frenchies love to explore and play games, so will often be distracted and disobedient if the mood takes them. But unfortunately, this can place them at risk.

We’ve all seen those poorly trained dogs who run after other dogs and refuse to come back to their owners. There are also dogs who can get embroiled in potentially dangerous situations with other dogs and people.

Your Frenchie needs to understand who the boss is, so please persevere and be patient with your French Bulldog recall training. If you can get your Frenchie to come back to you when called, both your life and his will be a lot less stressful.