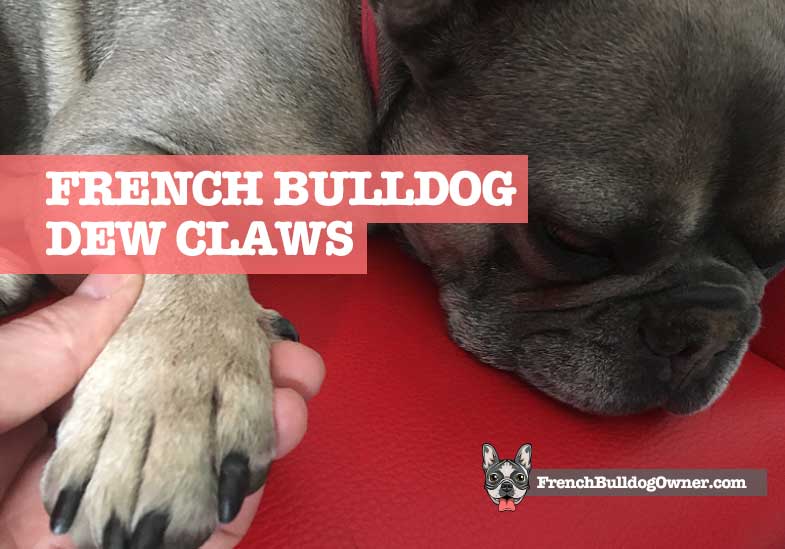 In today’s quick guide I am going to explain everything I know about French Bulldog dew claws. It includes why they have them, what they’re for, treating injuries, and details on why some breeders are inclined to remove them.

I am not a breeder, so anything you read in here comes from the angle of a loving owner of Frenchies. It’s all my personal opinion, research, and experience.

What are dew claws?

The standard number of claws on a dog will be five each on the front paws, and four each on the rear paws. That extra fifth one you see just a little bit up from your pup’s front paws, is called the dew claw.

The purpose of dew claws is kind of like we have thumbs. They certainly “look” similar when you take their paw in your hand (see the example I show below in this photo of my Frenchie’s front dew claw).

Just like all dogs, your Frenchie’s dew claws will grow up a little bit higher than the rest of his paw. They are positioned on the inside of the leg, and in Frenchies this usually means a few centimetres up from the rest of the paw.

They are called a dew claws in animals because they were said to brush dew from grass as the animals walks about. In dogs they don’t touch the ground when he is standing up but will make contact when he runs about.

Dew claws should be firmly attached to your Frenchie’s front leg. You can feel the attachment and should be able to detect a bone connecting it to the rest of the leg.

However, the rarer dew claws that grow on the rear leg of a Frenchie, or in cases of double dew claws, tend to be only attached to the leg with skin, so can be moved around more freely.

What are Frenchie dew claws for?

When your French Bulldog runs, his legs and paws will bend, with the front dew claws making contact with the ground. The dew claws offer stability and traction and can help your Frenchie to move and run faster.

Did You Know? We tracked our own French Bulldog Claude running as fast as 17 miles per hour. We think that makes him the quickest Frenchie in the world – can yours run faster? If you think he can, check out this blog post and league table.

Frenchies can also use their dew claws like we do our own thumbs. For example, they can use them to grip onto a toy, food, or for balance in tricky situations.

Do French Bulldogs have their dew claws removed?

So, this is where I have a very different opinion to some (but not all) breeders. There are some breeders who will remove their French Bulldog’s dew claws. They have the opinion that it improves the look of their dogs and puppies for shows and high-end breeding competitions.

Let me just state though; it’s just some breeders who do this, and not all.

If you check out the website of the American Kennel Club who set the standard for what defines a French Bulldog, they say this:

“The French Bulldog has the appearance of an active, intelligent, muscular dog of heavy bone, smooth coat, compactly built, and of medium or small structure. Expression alert, curious, and interested. Any alteration other than removal of dew claws is considered mutilation and is a disqualification.”

What they are saying there is that, actually, they don’t believe this to be a problem.

I think differently though.

Whilst French Bulldog dew claw removal for cosmetic reasons is rare and only practised by a few breeders, I can’t help but think it must be painful. It has to be completely unnecessary; unless for medical reasons surely?

For example, some Frenchies will continue to catch and injure their dew claws. For this reason alone, it can be beneficial to have them removed.

What age to remove dew claws from a French Bulldog?

If breeders do decide that their Frenchie’s look better without the dew claws and want to remove them for cosmetic and show purposes, it needs to be done at a very young age.

It’s not often that dew claw removal is practised, but when it is, veterinarians recommend it happens when a puppy is under 5 days old. The dew claw area will also need to be anesthetized before the quick procedure.

Is it illegal to remove your dog’s dew claws for show purposes?

Whilst researching this guide I was shocked to find that it isn’t actually an illegal practice in the UK or United States for cosmetic or breeding reasons.

For example, in England, Scotland, Wales, and Northern Ireland, it’s currently not illegal under the Animal Welfare act. You can read more on the UK’s Kennel Club website.

Injury and discomfort to your Frenchie is the case where dew claw removal definitely does need to be considered. Some owners might see their Frenchie’s dew claw falling out, ingrown, or torn, or injured due to constant catching and snagging – it’s bound to be very painful. We can all agree on that.

Older French Bulldogs can also get diseased dew claws, with cancerous tumors being reported in area. It’s rare but can happen as they age.

In addition to existing injuries or disease, some vets will also recommend cutting them out if they hang loose from the paw and are more likely to catch. Vets will often combine a spay or neuter procedure with dew claw removal – so the dog is under anaesthetic for both surgeries making it quicker and easier.

However, according to vet statistics, dew claw injuries are very rare in Frenchies. They are not reported on the top 31 health issues in this breed, so to remove that when young as a preventative measure, does seem a little debatable in my opinion.

As an owner, I would recommend that you keep an eye on your Frenchie dew claws rather than removing them and keep them trimmed to stop risk of injury.

One of the first signs that your Frenchie has a dew claw problem will be licking of the area. French Bulldogs lick dew claws when they get too long or have developed an irritation. Licking of dew claws can also be a sign of an infection or allergy, possibly skin-related.

How to clean your Frenchie’s dew claws

The way you maintain your French Bulldog’s dew claws is just the same as you do with the rest of their claws. With more active dogs, you probably don’t need to do much because by running around and playing, they will keep them short with no need for trimming.

With older Frenchies, the dew claws and rest of their nails can get longer due to inactivity. Ingrown dew claws wont’ be uncommon in their later years.

In cases like this, you should trim their nails yourself or visit a dog groomer or vet who can do it for you. Here’s a video showing you how.

How to treat a broken dew claw

If your Frenchie has a dew claw injury, you might be able to treat it yourself. I would always recommend you talk with your vet first though, but if you are DIY inclined, here’s a possibility I found on PetHelpful.com:

Hopefully I’ve given you all you needed to know, and we all now understand whether Frenchies have dew claws, why they have them, and whether they can be removed.

I had no idea about all of this before the research; just like you, I am a Frenchie owner, and research and write these blog posts to learn more about our boy, Claude.

I hope you enjoy what you read, and you can go meet us on our YouTube channel.

If you enjoyed this short read, you might also like some of my quick Frenchie guides. Here are some of the latest I’ve published, and most popular: