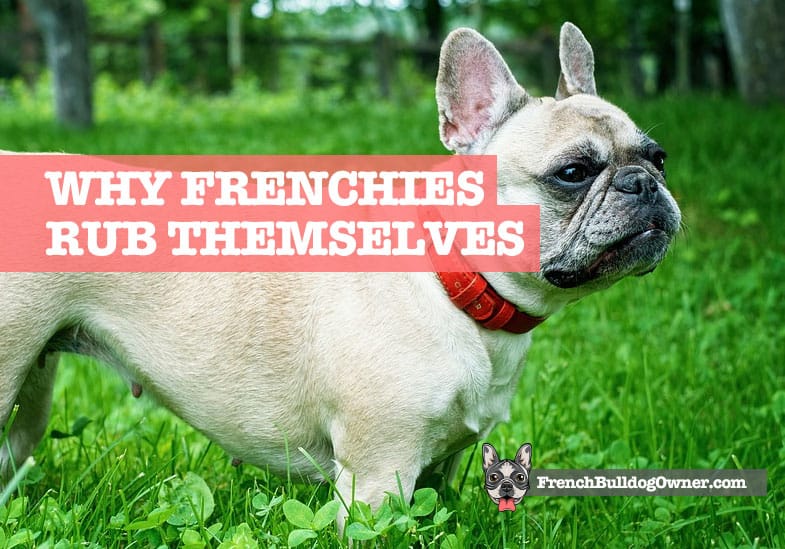 One of the more amusing habits that Frenchies can have, particularly the males, is rubbing themselves. There are plenty of reasons why French Bulldogs rub themselves, including rubbing their willies, private parts, and private bits (whatever you wish to call them).

I’m going to give a very brief overview of why your Frenchie rubs himself and what it could mean; with all the possibilities listed.

Why does my Frenchie rub himself?

French Bulldogs are in the unfortunate bracket of dog breeds that are unable to reach certain parts of their body. Due to their breeding, they cannot get their mouths to areas such as their bums, ears, and private parts.

Are the all the different reasons I can think of why female and male French Bulldogs rub themselves.

Frenchies rubbing their genitals / playing with themselves

You might see your Frenchie pulling himself along a carpet to scratch an itch. You might see the classic bum scooting action too (here’s what that can mean), but if it’s the pawing at his willy or her vagina you have concerns about, here’s what it could mean:

1. Just a general itch or cleaning

Dogs clean themselves using their mouths, so imagine not being able to get to a particular spot when needed? Which is another reason why your Frenchie rubs himself down there.

He might use his paws or pull himself along carpet to scratch that itch or clean something off the parts he cannot reach.

Rubbing could also be the sign of an irritation, so it is worth checking with your vet if concerned… more about this in the next point though.

2. An infection or UTI

Your Frenchie could be suffering with an infection or UTI that he cannot reach with his mouth.

It could be extremely uncomfortable, hence him needing to rub his willy or lower parts with his paws, or on you, a wall, a carpet and another object to get relief.

Based on that knowledge bomb, if you’re wondering why your French Bulldog rubs his willy, then it could be that he is “playing with himself” for want of a better description.

Willy rubbing behaviour is more common in male Frenchies that have not been neutered, so you can add this to the list of pros and cons for neutering.

Frenchies rubbing themselves on things or rolling around

1. To coat themselves with a new scent

Other than rolling on their backs to be submissive, Frenchies will also rub their backs on the ground to get a new scent onto themselves. Frenchie are strange beasts aren’t they?!

And it always seems to be smelly things they roll in too. Whilst we might think something is stinky, they have a completely different point of view and love the smell.

From what I can research, there’s no real scientific reason that has ever been proven for why dogs like to roll in smelly stuff. The best explanations all theory-based, with this one from Pedigree.com putting in an easy to understand concept:

“Many believe it’s instinctual behavior, harkening back to the days when your dog’s wild ancestors would mask their scent to help them sneak up on their prey. Wolves, for example, have been observed rolling in animal carcasses or the droppings of plant-eating animals, to cover up their own smell during the hunt.”

This would explain why I’ve seen my French Bulldog rolling and rubbing himself on dead rats in our local forest!

2. Rubbing themselves on their owners or up against furniture

The reasons he is rubbing himself on a wall or couch is his way of marking territory. By rubbing along a door or wall, your French Bulldog will leave his scent to warn other dogs that this is his domain. It’s more common with dogs who share a household.

When your French Bulldog rubs himself on you, it’s scent-related again. He is marking his smell on you to signal that you are an important member of his pack. There are scent glands in your Frenchie’s face that leave a smell behind – he’s letting everyone else know you’re in his gang!

Frenchies rubbing their bum along the floor

This is an entirely different situation and one that I have covered in more depth in my guide to bum dragging and scooting. Here are the rubbing reasons very quickly though:

The next time you see your male French Bulldog rubbing himself or his willy, you now know that it might not necessarily mean that’s he playing with himself – but it could be just that! There are many different reasons why which I’ve highlighted above.

And with both genders, male or female, Frenchies that rub themselves do so for a range of reasons including not being able to reach the itchy part or scent marking.

For more insight into the quirks of Frenchies, here are a few highlights from the blog: