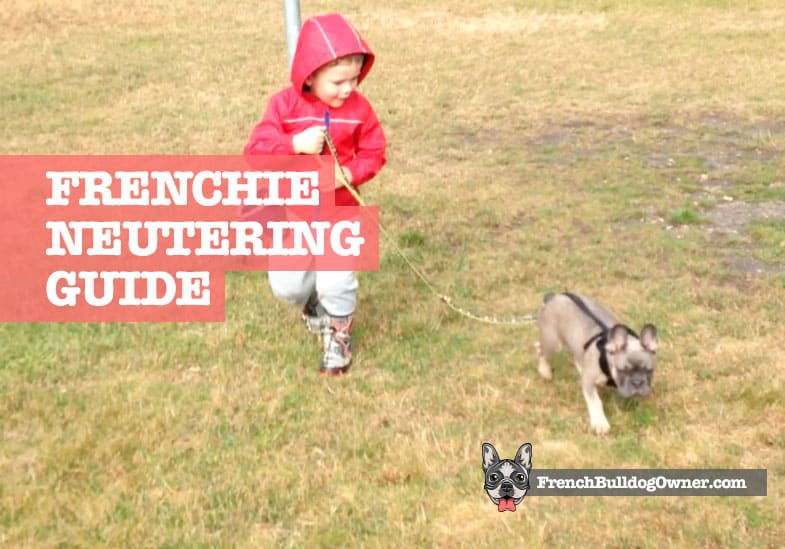 New owners will always have questions over neutering; I remember very clearly how much research I did before we had our own Frenchie Claude done. In this guide I will share with you what we learned about why French Bulldogs should be neutered, when you should do it, how much it costs, what the surgery and recovery involves, plus some pros and cons.

Disclaimer: The content in this guide is based on having spoken to my own vet, plus the knowledge of other Frenchie owners I know. There will always be differing opinions, so please consult with a vet that you trust and who knows your dog.

When it comes to neutering your Frenchie, it seems there’s a range of wildly different opinions, arguments, and even some horror stories passed down through a friend of a friend.

Handy Hint: Male French Bulldogs are neutered, females are spayed. I’ve also published the ultimate guide to spaying if you own a girl and not a boy.

This can make the question of when the best time to neuter your French Bulldog is (if you even decide to do it at all). When everyone has something different to say, who should you trust?

Before we go into the matter at hand, I’ll say this – you’ll know your dog better than anyone, and you should let your own intuition (alongside the advice of trained medical professionals, of course) take the lead on this matter.

Try and shut out the noise and consider what your vet says about neutering your Frenchie carefully… however, you came here for quick advice, so here’s my opinion on what we did.

When to Neuter your Frenchie?

When to neuter a French bulldog puppy? The best age to neuter a French Bulldog tends to be between 4 and 9 months whilst the puppy is still in the adolescent phase. Vets recommend that neutering before sexual maturity can have multiple health and behavioural benefits.

This is a rough guideline as it’s important that your Frenchie has matured and grown enough to handle the surgical procedure, whilst not being too grown so as to miss out on some of the benefits of being neutered.

At the very least, they should have completed their muscular and skeletal development.

Should I neuter my French Bulldog?

Although a lot of Frenchie owners opt to neuter their pets, a small minority do have concerns the risks involved and will opt to keep them un-neutered. You can read my personal view on this below…

Should I neuter my French Bulldog? I believe male Frenchies should be neutered unless you plan on breeding your dog. Neutering can reduce bad behaviours such as mounting, territorial urine marking and aggression, plus unwanted pregnancies. It can also reduce the risk of prostate cancers.

Pros and cons of neutering your French Bulldog

As with any surgical procedures, there are pros and cons no matter what you do – I will lay out some of the most common ones here for you to make a judgement for yourself.

A lot of owners don’t think French Bulldogs should be neutered due to the belief there can be complications or ramifications leading to a poor quality of life.

However, a number of the myths surrounding the neutering of your French Bulldog are just that: myths.

To distinguish the old wife’s tales from the facts, I have ‘busted’ some of the most common misconceptions that French Bulldog owners have when it comes to neutering.

Will neutering my French Bulldog calm him down?

Neutering can calm your Frenchie down, but not always. There is no cut and dry answer to this question. Neutering will only calm a French Bulldog down if the behaviour is down to hormones; neutering will stop that.

What the surgery involves

The operation doesn’t take long and is fairly simple. When vets neuter your French Bulldog, they perform a procedure known as orchiectomy. This is the surgical removal of the testicles, but it is a largely non-invasive procedure.

Here’s how it should work:

It is important that your vet is familiar and experienced with the nuances of the French Bulldog breed. This is because Frenchies need milder anaesthetic types like sevoflurane rather than the usual ones they give dogs – it’s due to brachycephalic syndrome.

Due to the generations of breeding, French Bulldogs have a flat face and this can (in rare cases) lead to breathing complications during surgery.

What to expect after neutering your Frenchie?

Your vet will advise you on what to do and should provide a post-operative care plan. Don’t worry though, it’s really simple stuff and here’s what to expect:

How much does it cost to neuter a French Bulldog?

Neutering costs will vary wildly depending on the vet, your location, and whether or not your Frenchie’s testicles are descended into the normal position.

Although costs vary based on your specific vets, the average UK and US prices for a French Bulldog to be neutered is as follows:

If you are in the UK and receive benefits such as Universal Credit, you are entitled to free or largely subsidised healthcare under organisations like PDSA (check to see if you are eligible).

If you reside in the United States and cannot afford the cost to neuter your Frenchie, then take a look at the Humane Society’s website. There’s a list of possible options including charities and shelters who can help.

What other owners say…

I never like to just give you my opinion, but also a round-up of what other owners say. Here’s a selection of comments I found on social media about neutering Frenchies.

“My sister’s Frenchie was 9 months old when she got him. She had him neutered just a couple of days later as his attempted mounting was making her spayed female dogs freak out!”

“I had my boy done at 6 months best thing I did. He’s now such a chilled-out boy and it seemed to calm him down. He’s got a lovely temperament.”

“Getting a dog neutered before he is fully grown can be detrimental to his health and doesn’t always solve behavioural problems. He’s growing up and his hormones are kicking in hence the humping. It may be a bit annoying or embarrassing but it’s kind of what they do!”

“In my opinion getting your Frenchie neutered is best and could help to calm. It can also prevent some cancers best to speak with your vet or vet nurse they will advise you on the best route.”

“As dog owns for decades we also say get him neutered. It makes a massive difference and your Frenchie will be more settled and less preoccupied with humping other dog or items.”

“My boy loved being neutered. Not at first, he hated me for a couple days. But after that he finally started to play fetch with the other dogs and loves running around which he didn’t before.”

“Getting him neutered will not help behaviour, training helps behaviour. Dogs hump for lots of reasons. Do some research. Solid structured training is a big help.”

“My vet said it’s best not to neuter because neutered dogs have way more health issues. I however, did neuter my boy because he humped everything non-stop. The humping stopped, but it did not call him down one bit. “

“Mine is neutered. He’s no more or less aggressive, though. He does consider anything within his reach his. I’m going to try the trade method when he grabs socks or underwear off the floor and won’t let go.”

The general consensus from vets and owners is that the best time to neuter your French Bulldog is when they are still in their adolescent stage – from 4 to 9 months old.

Neutering your Frenchie is said to numerous health and behavioural benefits, so it is a decision that every dog owner should take seriously.

If you choose to neuter your French Bulldog, it is important to strike the right balance between too soon and too late.

But the bottom line is this; talk to your vet and get professional advice. All dogs are different!

You Might Also Like:  I have recently found different advice on when you should neuter your Frenchie. I recommend you read this too as they say the opposite. It’s on the Dogs Naturally Magazine (read here), and states that early neutering can affect canine bone growth negatively.