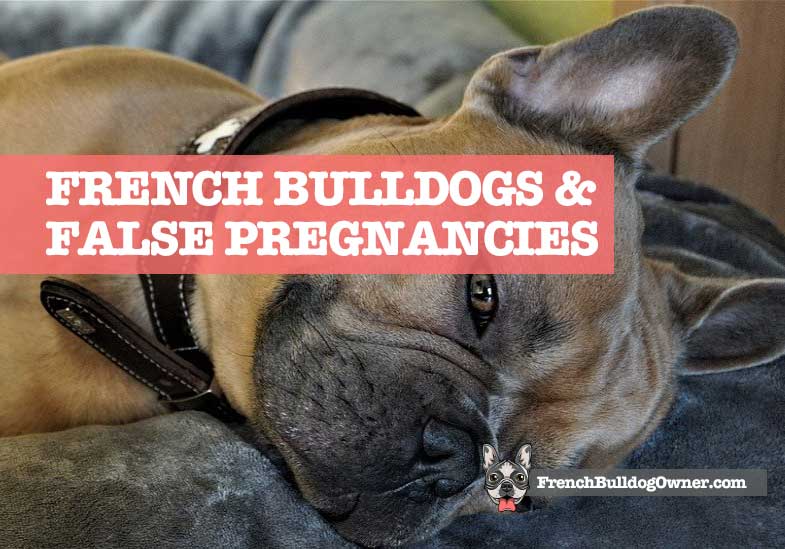 As the owner of a male Frenchie, a false pregnancy is a phenomenon that I never even knew existed; until last week! Our friend brought her female Frenchie over as she was convinced her dog was pregnant – and she certainly looked it with all the classic signs of pregnancy.

But there’s was no way this French Bulldog could be pregnant. Whilst she had not been spayed yet, her owner had been very careful to not let her out of her sight and near any un-neutered males.

It had all the signs of a phantom pregnancy, and in fact that’s exactly what it was, we just didn’t know it at the time.

But a few days later my friend called me to say they’d been to the vet, and the vet had diagnosed her French Bulldog with a false pregnancy.

After hearing this I decided to research all I could about false pregnancies in dogs and put it into this bite sized reference guide for Frenchie owners.

False pregnancy is most common in females that have not been spayed, although it can happen with spayed dogs, albeit very rare. Your French Bulldog will show all the signs of being pregnant, despite not being pregnant.

It’s very strange, but not as unusual as you might think.

The clinical name for false pregnancy is pseudocyesis or pseudo-pregnancy and will manifest with both physical and behavioral changes… making you and your dog think there is a real pregnancy going on.

It’s not just a dog thing either, it happens in many animals, including humans (read the Wikipedia detail).

The thing with Frenchies is they do have very rotund bellies. Even if they don’t have any other signs of pregnancy, after a heavy meal, some can look like they are expecting.

In most cases, the phantom pregnancy symptoms will start 1 to 2 months after your Frenchie’s previous heat period and will mimic those of a real pregnancy.

Aside from a fat and round belly, there are a lot more symptoms and signs of a false pregnancy that your French Bulldog could display. Your Frenchie could have some or all of these symptoms, including:

Your Frenchie will appear to be weaker than normal, with the most obvious signs being a lack of energy and unwillingness to play.

2. Changes in behavior and mood

This one will vary dramatically from dog to dog and even day to day. One moment she might be her happy self, then appear depressed, and possibly show signs of aggression.

During a phantom pregnancy, a French Bulldog can have extreme appetite changes, similar to pregnant dogs. This can include wanting to eat lots more than usual for days on end, then suddenly switching to not eating much at all.

When a dog thinks it is pregnant, its natural instinct is to want to nest. This can include digging, fidgeting, anxious behavior and finding a warm, comfortable, safe place to have puppies.

Your French Bulldog might start nursing her favorite toys or inanimate objects. She might be attached to one toy in particular and exhibit protective behavior such as aggression.

One of the more amazing symptoms of a French Bulldog phantom pregnancy will be the nipples getting bigger. It’s her body’s reaction to expecting puppies; they can get bigger even with or without lactating milk!

Handy Hint: I previously wrote a guide to why your Frenchie’s nipples have got bigger. It isn’t always a sign of a false or real pregnancy and can be a different issue altogether.

Sometimes there will even be milk produced from her swollen nipples. Check for wet spots on her bedding or crustiness around the teats.

One of the more common signs of false pregnancy will be sickness in the morning or vomiting at other times in the day. Morning sickness will often be accompanied with lethargy, cravings, swollen nipples, food cravings, discomfort and increased urination.

Some Frenchies will put on weight, then lose it again quickly. This is due to the vomiting and appetite changes, plus a degree of fluid retention. It’s very unusual for weight loss thought, as in like a real pregnancy, weight is put on.

Frenchies going through a pseudopregnancy can occasionally secrete a mucous discharge.

This is one of the rarer symptoms of a phantom pregnancy. It’s your Frenchie’s body telling her that she needs to take on more nutrients to feed her growing puppies, even though they aren’t there!

Handy Hint: This isn’t the only reason why your French Bulldog could be eating their own poop. Please also check against these other potential problems related to poop eating.

I’ve saved the most obvious for last, which is a swollen belly. With Frenchie’s rotund shapes, this can often be mistaken for pregnancy without any of the other symptoms on the list. But it genuinely can occur with dogs who are not pregnant.

Why Frenchies get false pregnancies

During your French Bulldog’s heat cycle, her ovaries will produce hormones. This is the body’s way of getting her uterus ready to grow the puppies, regardless of whether she is pregnant or not.

If your Frenchie doesn’t conceive during this time, the hormones produced will start to decline. However, in some cases, a hormone balance will be created, sending signals to her body to replicate the symptoms of pregnancy – including mammary glands enlarging and other signs of pregnancy.

How vets check for real or phantom pregnancies

If you are seeing the signs of pregnancy but are absolutely sure there is no chance she has conceived, then it has to be a phantom one.

However, if you are not sure whether your Frenchie has come info contact with a male, your vet can perform:

Your French Bulldog’s phantom pregnancy will typically come to an end by itself, with no treatment required unless the symptoms persist for longer than 21 days.

Most Frenchies won’t have false pregnancies once they have been spayed, with this being the most obvious way to prevent the issue occurring.

Handy Hint: I’ve previously published a guide to the pros and cons of spaying your Frenchie. It also includes details on how much the procedure costs and any complications that might occur.

Can spayed Frenchies have false pregnancies?

It is actually possible for a spayed Frenchie to show the signs of pregnancy, and it’s often due to when the spay surgery was performed.

If the female is spayed whilst experiencing a phantom pregnancy, she can continue to exhibit signs of a pseudo-pregnancy for several weeks afterwards.

How long will a phantom pregnancy last?

Phantom pregnancies can last for as little as 7 days to as much as month. How long your Frenchie’s fake pregnancy lasts will depend on how severe the symptoms are.

How to help your non-pregnant Frenchie

Whilst most Frenchies with pseudocyesis will quickly get through it, there are some things you can do to help make the process more comfortable. This includes things like:

Having a French Bulldog go through a phantom pregnancy can completely mimic a real pregnancy, albeit it won’t last as long. For owners how haven’t spayed their female and let her have access to un-neutered males, it can also be a confusing time.

But… not as confusing as it will be for your female.

Treat her with care and love at this time, as it can’t be easy for her.

On the subject of pregnancy, here are some other guides you might have an interest in: