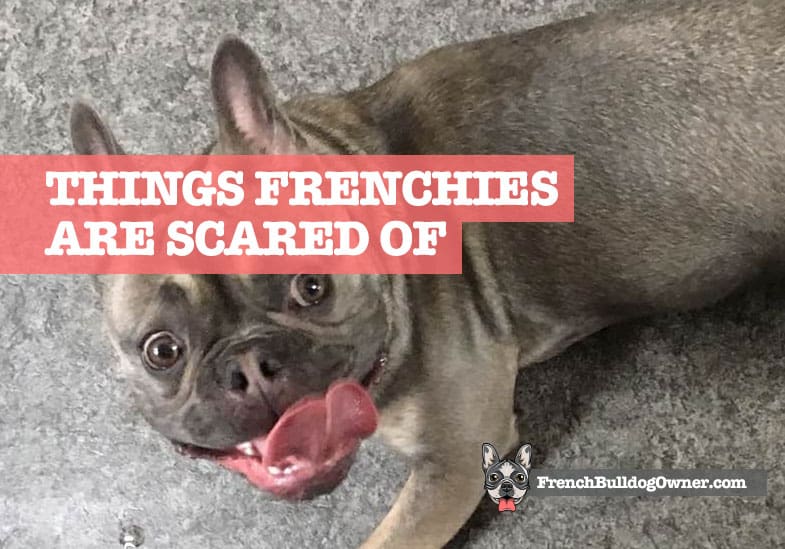 All dogs are very different, but they do have one thing in common; they can all be scared of something. French Bulldogs are no different.

What your Frenchie is scared of will depend on how they have been raised and trained, the experiences they have had, environmental factors, and their overall health. The bottom line is that bad experiences will contribute to their anxiety levels.

There are no set things that French Bulldogs will be scared of. For example, our boy Claude is fine with loud noises. He will not react to fireworks, thunder, lightning, or a car backfiring. Other Frenchies on the other hand will completely freak out.

It’s all down to character and experience.

But there is one common trait I’ve seen with French Bulldogs getting scared, and that’s them being afraid of things that are unfamiliar or confusing.

Using Claude as an example, he was exposed to loud noises as a puppy. We live in a noisy house, and he grew up with a toddler – you can see clips in this video of ours on YouTube.

Because of this, loud noises tend not to scare him. But other things like water coming out of a hose do, and I will explain why a little further down when I list the things that scare our Frenchie.

Are French Bulldogs scared of fireworks?

Some Frenchies will be scared of fireworks, some won’t. However, it’s not something that you should actively test. Around Bonfire Night in the UK, or the 4th of July in the United States, take precautions and make sure your Frenchie is indoors with you and calm.

Whilst it’s very rare for a dog to actually die being stressed out by the noise of fireworks, it can have other health implications.

Like with any scare of stress, if your French Bulldog does get scared of something, it can multiply existing stress levels which can then trigger a health problem.

What are French Bulldogs scared of?

As all dogs are different, I decided to do a very quick poll on a popular Facebook Frenchie group to see what things owners say their dogs are scared of. Here’s a list of the replies, and I am sure you will agree there are some very unusual scary things in here!

As you can see, French Bulldogs can be scared of anything.

Handy Hint: If you believe your Frenchie is scared because of being left alone, I would advise  reading this guide to dog separation anxiety with tips on what you can do.

What our own French Bulldog is scared of

Our Frenchie is a pretty robust and fearless character but are a few things that he does get scared of. Here’s a few of our list which you might think sound ridiculous, but not to him!

His fear of the water hose stems from him being a puppy and one summer in our back garden. I was filling my son’s inflatable pool with the water hose, and my son, being only 3 years old, thought it would be funny to spray Claude the puppy.

He absolutely hated getting drenched, and even though it was only for a couple of seconds, it’s obviously stuck in his head as a bad memory.

Ever since then, if he’s doing the whole Frenchie selective hearing thing, all I need to do is walk over to the garden hose, hold it up in the air, and he will run into the house. I don’t even need to turn the water on!

As soon as we get the vacuum cleaner out to clean the kitchen floor, Claude the Frenchie will bolt out of the room and straight through the dog flap. He won’t come back into the house until he hears that vacuum cleaner has been switched off.

I have no idea why our French Bulldog is scared of vacuum cleaners, but he will even go so far to attack and bite at it, if he is cornered in the room with no clear escape route.

My wife and I love to watch National Geographic documentaries. She’s a huge fan of big cats such as lions, tigers, and leopards. Claude the French Bulldog isn’t a fan though.

As soon as sees any big cat on TV, his hackles go up and he starts to growl and bark at the TV screen with fear. I can only imagine that it’s an instinctive fear where he’s scared of a potential predator.

I’ve only ever seen this once before, but it was really funny and must be related to his fear of big cats.

Picture the scene; I was taking Claude for a walk when a punk rocker guy starting walking down the path towards us. He had a leather and leopard print jacket on, and Claude was trying to go for him!

Claude was barking and growling at the guy until he passed. I have never seen our French Bulldog be scared of anybody or show aggression towards a member of the public. It was really, really weird!

4. Jumping up after an injury

Our French Bulldog went through a period of being scared to jump up on our couch. The fear lasted for a couple of months after he injured his back, so being scared of jumping makes perfect sense in this case.

If you Frenchie has hurt themselves, a behavioral change or new fear can be the first sign that something is wrong. You can read this diary entry where I explain what happened with our dog.

Signs that your Frenchie is scared and fearful

There are plenty of things to look out for if you think your French Bulldog is scared of something. I’ve split the signs up into 2 distinct categories, with links to some tips if you need help with the symptoms or cause of fear.

To conclude, what your French Bulldog is scared of will be completely different to what another Frenchie will be. Fear is very much a personal thing based on experiences and environment.

It’s not always obvious either. It could be little things your Frenchie is doing that you don’t even notice but could be sign they are scared. I’ve written at length about this in my other guide on how to identify Frenchie depression.

And lastly, I’d like to end on more of an upbeat note; Frenchies can dream. Most of the time I am sure it’s about really fun things, but they probably have scary ones too. Click that previous link to find out how you can tell!