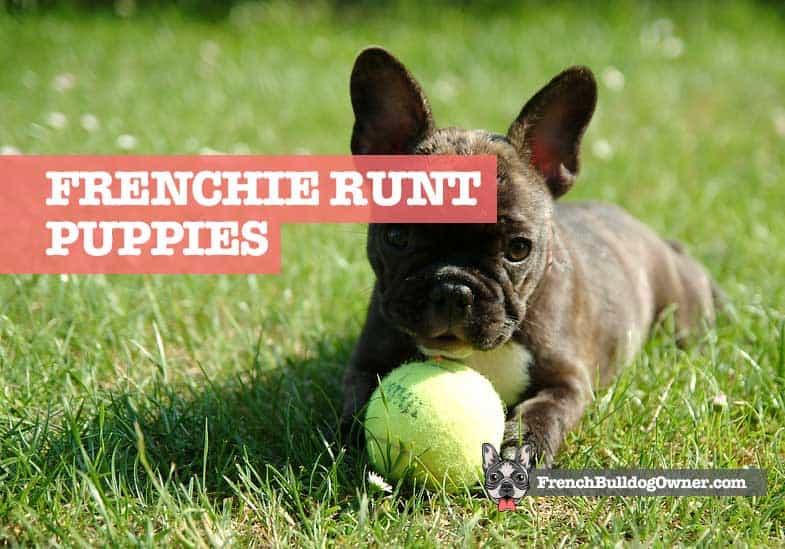 Have you been offered a French Bulldog runt and are worried about buying the puppy due to potential health concerns? Perhaps you’re a breeder and your Frenchie has had a runt in her litter, and you need some advice?

Whichever the scenario, I’ve put this guide together which explains all you need to know about French Bulldog runt puppies. Before I get into the detail though, here are some quick misconceptions about what to expect from the runt of the litter.

What does the runt of the litter actually mean?

There are so many myths about what a runt puppy actually is. It’s not the last puppy to be conceived and it’s not the puppy that develops in the middle of the uterus either.

The majority of people think of the runt of the litter as being the one smallest or weakest Frenchie puppy. It’s a popular descriptive term. However, the way in which breeders describe runt puppies is a little bit different.

Essentially, a runt puppy is one that is born weighing well under what is considered a safe and healthy range. That means there can actually be more than one runt puppy in each French Bulldog litter.

Frenchies have on average 3 puppies in each litter, so it’s quite feasible that all 3 could be born severely underweight, and therefore classified as runts.

Is it bad to get the runt of the litter?

Should you even buy a French Bulldog runt puppy?

Well, there’s nothing wrong with buying a French Bulldog’s runt of the litter. In many cases, runts grow up to be perfectly healthy with no personality issues.

In fact, a runt can be perfectly healthy despite the small size.

However, you do need to be careful because some runts can struggle to gain weight after birth and might not develop as well as a “normal” Frenchie puppy.

As runts are so small, they can struggle to get the milk they need from their mother, or the attention that she’s giving to the other puppies. This means the runt won’t be taking on as much nutrition as the others.

It’s natural selection at its finest, with the fittest of the puppies tending to grow bigger or just survive. Breeders will often need to pay close attention to the runt, possibly place them on the mother’s teats, or even provide a commercially available milk.

Being smaller also comes with other health issues. They can become dehydrated or contract hypothermia due to not being able to get close to the mother.

Without the mother’s milk, the French Bulldog runt will also miss out on essential antibodies which protect against bacteria and infections.

But, if you’re a buyer and checking out Frenchie puppies who are around 8 weeks old (the time they can leave their mother) it’s likely that the breeder has been nursing the runt to ensure its approaching a healthier weight.

Handy Hint: Keep scrolling down as I have questions and things to look out for before you buy a Frenchie runt a little further down the page.

At 8 weeks of age, most runts will have overcome the most dangerous period of their life which is the 6-week mark. An estimated 25% of puppies who have been born drastically underweight will have died by this point.

So, what weight defines a Frenchie puppy as a runt? This is thing; there is no birth weight that give you an exact definition of what a Frenchie runt will be.

However, Frenchie puppies will way around 8 and 9 ounces 24 hours after being born. If they are dramatically under that weight, then they are classified a runt.

Will my Frenchie runt stay small?

Do runts of the litter stay small? No, they don’t always… once the runt has started to eat solid food they tend to catch up in size with their siblings.

Just because you have a healthy and small Frenchie runt puppy, it doesn’t mean your pup is going to stay small.

There’s no guarantee either way though, and each case will be different. There is no way of knowing how big your Frenchie puppy runt puppy will be once fully grown.

Will the personality be any different?

This is one of those myths about runt puppies; the runt of the litter personality. I’ve seen countless websites that claim runt puppies are more loving, or more nervous… none of this is backed up by any factual research.

There is zero evidence to suggest that the runt of the litter will have a personality change, temperament issues, or anything else purely because of their status in the litter.

As with all dogs, there are multiple factors which go into how their personality develops, and a lot of that is down to you, the owner.

Will the runt of the litter be harder to train?

Is the runt of the litter harder to train? Again, there is no scientific evidence to suggest the runt will be a challenge with training.

However, I’ve spoken to two owners who bought French Bulldog runt puppies who say they were tougher to train. They put this down to their pups being timid due to them being the smallest in the litter.

For me this isn’t a large enough pool of data to make any real assumptions.

To be completely on the safe side, I would advise against buying the runt of the litter where the runt has been classified as being born severely underweight. The bottom line is; they could be more susceptible to health issues including congenital and developmental problems further down the line.

But, if you are dealing with a reputable breeder and the runt is perfectly healthy, and just on the small side, rather than being born dangerously underweight, it can be absolutely fine.

This is where the two definitions of runt puppy come in. In other words, was it born with weight issues, or is it just a perfectly happy puppy who happens to be smaller than the siblings?

What you should always ask the breeder

I’ve previously blogged at length some questions you should ask a breeder and what to look for in a puppy. You can read that guidance here, but with runts there are some aspects that are more important such as:

How much should you pay for a French Bulldog runt puppy?

You should not be paying any more or any less for a Frenchie runt puppy. They should cost the same as a standard French Bulldog (here’s how much).

There are unscrupulous breeders out there who will try to pass off the runt of the litter as being a unique French Bulldog teacup variety – and attempt to charge a higher price.

Don’t fall for this trick. If you see a small Frenchie puppy with larger siblings, then it’s not a teacup Frenchie. If it’s expensive, but just smaller than the brothers and sisters, walk away…

And just because a puppy is smaller, it doesn’t mean it is unhealthy and you should pay less. Again, this comes down to the definition of what a runt puppy is. For example, if it’s just on the small size and perfectly healthy, there should be no cost implication.

How to care for French Bulldog runt puppies

Most of this article has been designed with the buyer in mind, but I also wanted to share some information given to me by a breeder. They gave me some tips on taking care of a the runt of the litter form birth.

Our Frenchie Claude was the runt of the litter. He was the smallest of all the puppies, and he was the last to be chosen by new owners – us!

Claude has grown up into a large size, he’s perfectly healthy, and in fact is a fast runner, and big game player.

But he wasn’t born dangerously underweight, so he wasn’t a runt as far as the breeder was concerned… he just smaller than the average Frenchie in the litter.

To re-iterate, the French Bulldog runt of the litter can be just a Frenchie puppy who is perfectly healthy, but just a little smaller than their siblings. In this case, you shouldn’t have any concern… just like we didn’t with our own dog Claude.

However, if the puppy is born severely underweight, then it is the breeding definition of a runt and you should proceed with some caution… the bottom line is this; work with your vt vet and only purchase from a legitimate breeder.