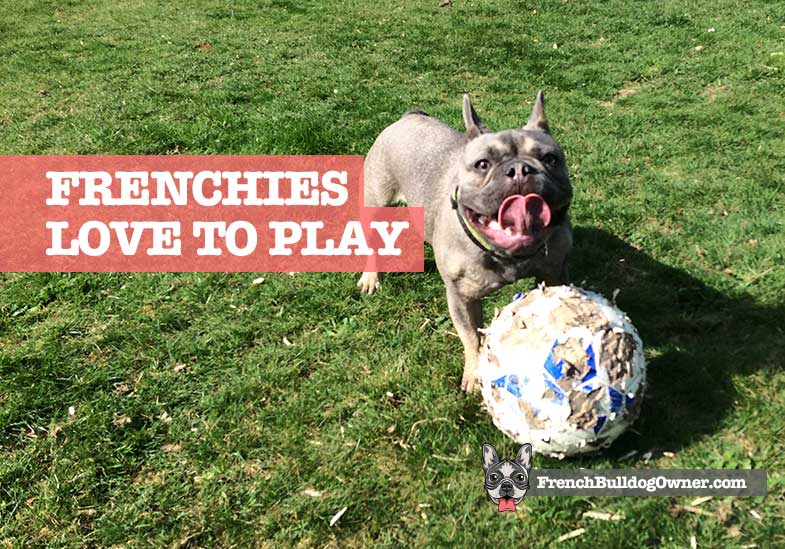 Owning a Frenchie is a whole lot of fun. If you’re a big kid like me, you’re in for a great time. If you have kids, then they will become their playmate. The bottom line is; French Bulldogs love to play – whether that’s playfighting, playing fetch, or with other dogs.

Yes, they do, and a lot! In this guide I am going to tell you exactly what to expect, what their style of play is like, and what we’ve learned about our own Frenchie’s playtime.

Do French Bulldogs like to play? Frenchies love to play and will be content with a chew toy, playfighting with a human, fetching sticks and balls, or with other dogs. In fact, Frenchies love form of play as their personality desires constant attention and stimulation.

Below I’ve answered some of the most common questions about French Bulldog play. You can also see a section near the bottom which explains what signs to look out for that could signal rough or aggressive play and when to be worried. Watch the video below to see various examples of how they play.

How rough your Frenchie plays will be determined on how you’ve raised them. However, as a generalisation, Frenchies are non-aggressive and playful. They do like do “mouth”, i.e. use their mouth and teeth during play, but they won’t clamp down on you if the dog is well adjusted with no behavioural issues.

When our Claude was a puppy, I would play rough with him, particularly with my hands. This was great fun for both of us but created issues as he got older. He used to see hands as being fair game, so I had re-train him not to play rough.

It was quite simple to do; we would say “ow” when he nipped us in a loud voice. You can see the full instructions on how to stop biting in this training guide in your French Bulldog is playing too rough.

Frenchies can play fetch and in fact it’s one of their favorite games. Claude loves chasing anything whether that’s a ball or a stick. He will play this game until he is completely worn out.

I would say this though; Claude never gives us the ball or stick back. He will run after it, pick it up, and then run towards us. However, it’s then a huge challenge to get it off him again. He loves to play a tug of war game with whatever it is we threw him to fetch but won’t let go.

That’s just his personality though. All Frenchies are different so it’s very likely you will have a French Bulldog who likes to play fetch and will even give it back!

Did You Know? When we tested how fast a Frenchie could run, we used a stick throw to get him up to his top speed of 17 miles per hour. You can our experiment in the video below.

Frenchies love to playfight with their owners, kids, and other dogs; at least in our experience they do. Claude loves nothing more than to roll around on the floor playfighting and wrestling with us.

He can get over-excited though, so we will often need to bring the Frenchie playfighting game to a quick stop if he gets too boisterous or out of breath. This can be quite risky in the summer time and in hot climates. Read our guide to how to cope with overheating.

Do French Bulldogs play with themselves?

Our French Bulldog plays by himself a lot of the time, being entertained with a ball or toy. You can see which Frenchie toys we have for Claude in our recommended gear section.

Whilst Frenchies can play with themselves, they much prefer to play with a buddy or human.

French Bulldogs like to play with everyone; kids, adults, other dogs, adults, and even inanimate objects such as toys, flowerpots, and anything else they can get their paws on!

Claude has become a playmate and companion for our 6-year-old son and provides hours of entertainment each and every day.

How do French Bulldogs play with each other?

We sometimes have another Frenchie come over for playdates. Her and Claude will play with each other all day. She is still a puppy so has far more energy than Claude, so we will have to separate them after a while as he can get too tired and a bit irritable.

In the main though, we’ve seen nothing but good things when our Frenchie has been playing with other French Bulldogs. That might not be the case with your Frenchie though, as some can be territorial as I will discuss in the next section.

How well do French Bulldogs play with other dogs?

French Bulldogs can play very well with other dogs, but it is completely down to individual temperament. Frenchies are not an aggressive breed but some can be territorial towards other dogs.

We personally have no issues in this department. Claude loves playing with other dogs and gets really excited when we go to the local dog park.

Some French Bulldogs can play dead, and I’ve seen a few videos on YouTube which have really funny examples of this happening.

We’ve not been able to train our own Frenchie to play dead, with the closest he has come to doing this being to roll on his belly to initiate play.

Frenchies like to play with virtually anything. Some of the best toys that our own Frenchie has played with weren’t even things we bought. For one weekend, a flowerpot in our garden was his most favorite thing in the world.

If you would like to see some actual toys that French Bulldogs like to play with, please check out our recommended toys and fun things section.

One of our top recommendations in there is a bomber ball to play with. We bought this for Claude after one summer where he was going through a soccer ball every week. The bomber ball is much more hard-wearing, and Frenchie’s can’t destroy them with their teeth.

Frenchies are affable little creatures who love to play. Here are some signs that your Frenchie wants to play with another dog or human being.

These are the most common French Bulldog play style signs we’ve seen. If you know of any more please comment on one of our YouTube videos to tell us more!

Signs that play has become aggressive and too rough

There are some signs that will warn you that the game is over, and play has become aggressive. You will see this when your Frenchies doesn’t want to play with another dog, or sometimes even people.

If it’s a playful dog you want then I can’t recommend Frenchies enough. However, owning a dog is a huge commitment and there are other aspects to this breed you should be aware of before you take the plunge. Here are some guides that will help you with the decision-making process.