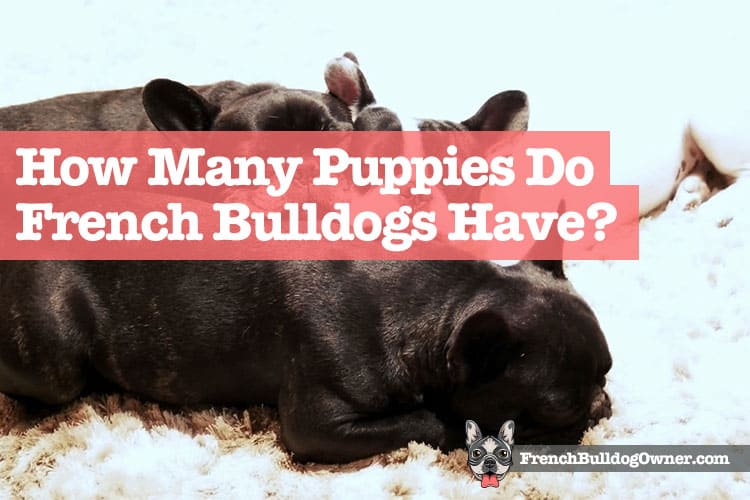 As a brachycephalic breed, Frenchies don’t often give birth to larger litters of puppies. Brachycephalic short-skulled dog breeds generally have very small litters. So how many puppies can a French bulldog have and how many litters can they have in total?

How many puppies do French Bulldogs have? On average, French bulldogs will have around 3 puppies in each litter. Anything more than 5 puppies is very unusual for a Frenchie, with 7 puppies being born extremely rare. Most litters will be delivered via Caesarean section.

If you compare this to larger dog breeds, for example a Golden Retriever who can have 8 puppies on average, the Frenchie litters are very small. Even smaller dogs such as Beagles can have litters of 6 puppies.

The small litter size, and desirability of Frenchies as a breed, is one of the factors which makes them such expensive dogs to buy.

How many litters can a French Bulldog have? Most French Bulldogs can have 4 litters in total. Any more than that and you will be placing the health of the mother at risk. Some irresponsible breeders will try to have more than 4 litters from their female.

Below you can see a table where I compare some of the most popular breeds of dog in the world, showing their average litter sizes. As you can see, the brachycephalic breeds have very small litters on average.

Why do French bulldogs have so few puppies?

I’ve already mentioned brachycephalic a number of times now. If you don’t know what that means, in simple terms it’s a dog breed that has a shortened head, short nose, and flat face.

Dogs of this nature tend to be smaller, and also have smaller amounts of puppies. And with French bulldog dams (the females) they have very narrow hips and small body.

They simply don’t have the capacity for large litters of puppies.

If a female Frenchie does have a large litter of over 3, there can be health implications for the puppies. They will probably be underweight, with the weaker ones in the litter struggling to get the milk they need during the first few weeks of being born.

How many times a year can a French bulldog have puppies?

How many litters can a French bulldog have in a year?

They should not have any more than 1 litter a year, and most preferably every other year. Because they are delivered via C-section, the female needs time to recover and recuperate, so anything intensive is just cruel and designed to make money. For more information on Frenchie C-sections, click here.

Handy Hint: I’ve written a guide to the breeding cycle which includes details on how many times you can breed a Frenchie safely and happily.

How many litters can a French bulldog have?

Most female Frenchies have around 4 litters in total, although I have heard of irresponsible breeders who try to get more from them.

This isn’t at all fair, because it can have a big impact on her.

If you are thinking about buying a French bulldog puppy, talk to the breeder and find out how many litters she has had.

If she’s had any more than 3, I would walk away.

How long is a French bulldog pregnancy?

Frenchies very rarely give birth naturally, with most puppies being delivered by C-section. Because of this, it’s really important to know when they will be ready to be give birth.

A French bulldog pregnancy (the gestation period i.e. from conception to birth) is 63 days. She will typically deliver by Caesarean section and will have on average around 3 puppies in her litter.

Frenchie breeders will often use artificial insemination to get their females pregnant, as this breed find it very hard to mate naturally due to their narrow hips.

You can read more about how long a Frenchie is pregnant for elsewhere on the website.

The stages of a French bulldog pregnancy

Below is a summary of the stages involved in a Frenchie pregnancy, showing the 4 stages of their reproductive cycle:

What age do French bulldogs go into heat?

When people say a dog is in heat, what they actually mean is that they are in their oestrus cycle. It is very similar to when a human female gets a period.

When a Frenchie dam is on her oestrus cycle it means she has gone into heat and will accept a mate and could end up getting pregnant.

French bulldogs go into heat from the point they reach sexual maturity. The regularity of their oestrus cycles tends to be every 6 months on average but will vary from dog to dog. It can take up to 2 years for a French bulldog to develop regular heat patterns.

Female French bulldogs can gain sexual maturity as young as 5 months old. At that point, if they have started to have regular oestrus cycles, they are at risk of getting pregnant.

And at that young age, they aren’t even fully grown, so the pregnancy could come with increased risks to the dog, and the puppies.

If you don’t want your lady Frenchie getting pregnant, then keep her indoors or on a lead during heat, or more ideally get her spayed.

But wait, didn’t I say natural insemination between Frenchies was rare earlier?

Yes, but other breeds of frisky dogs won’t have the hip issue I will go into in a moment and could very well get your lady dog pregnant.

C-sections aren’t required always, but it is the most common route due to the dam’s narrow hips and the large heads of the puppies. Recent research suggests that around 80% of Frenchie puppies are delivered by the Caesarean method.

If your French bulldog does have puppies naturally, it can be very dangerous for both the female and the litter.

The average cost of a C-section for this breed can range between $500 for a planned procedure and up to $2,000 for very specialised or emergency Caesareans.

Handy Hint: French Bulldogs mating naturally is a very rare occurrence. It can lead to health risks too. Find out more about why Frenchies should not breed naturally in this new blog post.

French bulldogs make for great companions and pets. If you browse other guides on the website, you will see plenty of photos and videos of Claude, our own Frenchie.

However, in recent years their popularity has exploded, and this has led to an increase in unscrupulous breeders who use irresponsible methods of breeding. This can result in poor health – read the various health problems that Frenchies are prone to.

If you are thinking about buying a Frenchie, please do your research into the breeder before you even consider buying from them.

A good breeder will put their dogs first, take care of the puppies, and won’t try to farm as many puppies as possible from the dam (female).