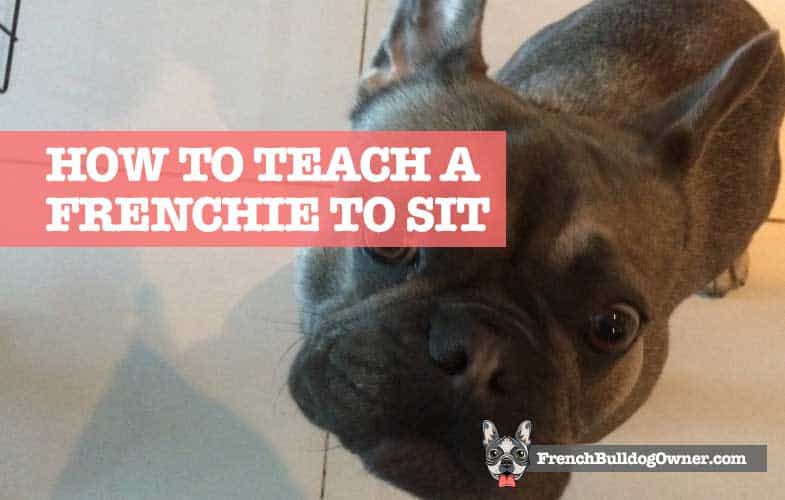 As soon as Claude had his vaccinations, we were comfortable taking him out of the home to start meeting other dogs. He hadn’t been trained at that point, and the socialization classes at our local vets were manic to say the least! We knew it was time to start going to proper puppy training classes if he was going to become a decent doggy member of society.

One of the most basic elements of any French Bulldog training is teaching them how to sit on command. It was by far the easiest of all the thing we learned from a qualified dog trainer. I think training a French Bulldog to sit is made way easier with the promise of a treat in your hand dangling above their head.

In this very short guide, I am going to take you through each step on how to train a French Bulldog to sit on command. If your dog is like Claude, I can almost promise you good results inside of a few days… unless you have a very stubborn pup!

How to teach a French Bulldog to sit

The “sit” command is one of the simplest tricks you can teach a Frenchie. Sitting down on their rear and hindlegs comes completely naturally to them so you don’t need any special gear other than a treat and some patience.

1. Stand in front of your Frenchie with a treat

With your French Bulldog in front of you, hold a treat out in your hand. If at any point your dog starts to jump up at you, turn around. By turning around, you are discouraging the jumping.

2. Hold the treat out over his nose

By holding the treat over your French Bulldog’s nose, it lets him or her get a good sniff so it knows there’s something good to come.

3. Move the treat over the head and let their nose follow

When you start to move the treat slowly backwards over your dog’s head the nose will follow. He or she will have no choice but to lower its rear down as it moves the head up to follow the smell.

4. When the rear touches the floor say sit and give the treat

Once your Frenchie’s bottom end touches the floor, say the “sit” command firmly and immediately give them the treat. This will help with the association of the action, word, and reward.

5. Repeat the process a few times

You can now repeat the steps again by stepping away from your dog and starting again. The key here is to not over-do it. Frenchies get bored just like a kid would, and they will soon find something else more interesting to do.

6. If this fails, push their bottom down

If you are not having any success with this method, you can also push the rear-end down gently, saying the “sit” command when it touches the floor, and offering the treat reward.

Unfortunately, I don’t have any video from when we taught Claude to sit as a puppy, but this video from Australia below is a great example showing the same method.

Can you train a French Bulldog to sit in one day?

We were lucky with Claude as he took to the sit command really quickly. Like most Frenchies, he’s got a huge emotional attachment to food, so I think this certainly helped.

However, in most cases I would recommend that you spread any form of puppy training exercise over a few days rather than trying to cram it all into one session.

Once your French Bulldog has learned how to sit on command, you won’t even need to use a treat in the future. It will become second nature over a short period of time just by hearing the level of control from your voice.

Why do French Bulldogs sit funny?

Whilst we’re on the subject of sitting, a friend of mine recently asked me why French Bulldogs sit funny. I wasn’t sure what he actually meant until I looked at Claude later that day.

He doesn’t do it all the time, but he will occasionally sit with his legs splayed rather than being in the more traditional dog sitting position. I don’t have a photo of him sitting funny, so here’s one I found online to demonstrate what I mean.

Why does your Frenchie sit and stare at you?

Continuing on with the sitting topic, have you ever wondered why your French Bulldog will sometimes just sit there and stare at you.

There are a number of reasons this happens, and it’s actually quite common with most dog breeds. Here are some of the reasons why:

As the master, your French Bulldog is probably entirely and completely devoted to you. It’s no wonder why they will sit and stare at you, as you’re the source of food, companionship, and fun. You can’t blame them!

Have you had trouble training your French Bulldog to sit? Or did you find it one of the easiest training techniques? I would love to hear any additional tips you have on teaching a Frenchie to sit down properly if you did face any challenges.

Having said that, most Frenchie owners I’ve spoken with have had no problems with the sitting command, but you will occasionally get a more stubborn than usual dog.

Stubborn Frenchies will react eventually to rewards and positive reinforcement. The trick is to remain patient with your puppy. They will tire quickly, but most of them will get their in the end.

Stop Your Frenchie Jumping Up: If you enjoyed this training guide you might also be interested in how to stop a Frenchie from jumping up on you. Read the 5 easy steps to follow in blog on how to stop jumping up.