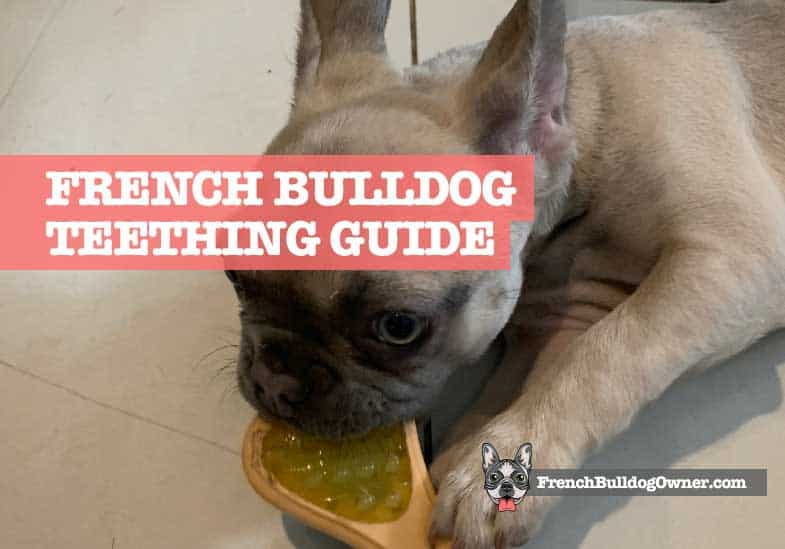 Just like human babies do, French Bulldog puppies will also teethe. I have often compared owning a puppy to having a baby. You have the tantrums, poop, pee, separation anxiety, and more… and that includes having to deal with them going through the French Bulldog puppy teething stages.

I remember when we got Claude. During his puppy months I was frequently finding little teeth on the carpet. I only wish I’d kept them now. And, we also had the chewing. It’s part and parcel of the teething process and something you have to help them deal with.

In this guide I am going to explain why French Bulldogs teethe, what age it happens and starts, what to expect, how you can stop them chewing your prized possessions, how to help them, and when it stops.

It’s your complete guide to the dental development of a French Bulldog.

The teething stages of a French Bulldog puppy

Don’t be worried if you find spots of blood and loose teeth. It’s entirely natural during the teething phases and is to be expected. But when exactly does teething start and stop?

Here’s the various stages you can expect with a normal Frenchie puppy.

Just like human babies, Frenchie puppies aren’t actually born with teeth. Their milk or baby teeth won’t start growing through the gums until they are a couple of weeks old.

French Bulldog baby teeth start to grow through at the same time their eyes begin to open. Unless you are breeder, you won’t be there for this dental development stage as the puppy will still be with his mother (here’s the best time for pups and mums to be separated).

In terms of which baby teeth come first it’s usually in this order:

There will be 28 baby teeth in total and they should fully stop growing through at around 8 weeks of age (which is the minimum age you can take a puppy home).

French Bulldog puppies don’t hold on to their baby teeth for very long. They will start to fall out, being pushed out by the adult ones.

When do French Bulldogs lose their baby teeth?

4. How long do French Bulldogs teethe for – between 20 and 24 weeks

The entire Frenchie teething process from start to finish will take longer than you might expect. In most cases, they will have stopped teething after 24 weeks, but it can end as early as 20 weeks from the start of the process.

To conclude, adult teeth do take longer to grow in than milk baby teeth. The molars are particularly prone to taking longer to push through.

However, by around 8 months of age, your French Bulldog puppy should have stopped teething completely and will now be the proud owner of 42 strong and health adult teeth. I have heard of some puppies finishing teething at 4 months, but this is very unusual.

I probably don’t need to tell you the first one, but it’s the chewing frenzy:

One of the best ways you can help your French Bulldog puppy when teething is to give him more toys to play with. However, the soft and fluffy toys simply won’t cut it. It needs to be something tough and rugged to cope with those sharp little teeth and sore gums.

However, if you just want to make a quick purchase, here’s the teething toy on Amazon that Claude had during his 3 months of teething.

It’s called the Kong and is a market leader in teething toys – view Kong chew toys on Amazon. We used to put Claude’s Kong in the freezer as it would help to alleviate some of the pain in his gums and teeth.

How stop your puppy chewing in the teething stage

When the baby teeth of your Frenchie start to fall out, your puppy will go on a chewing frenzy. It was such a problem with Claude that I had to buy a shoe rack to sit up on a work surface, as any shoes on the floor were fair game for him to destroy.

The reason French Bulldog puppies chew when teething is because it helps to relieve the pain they are feeling as the new adult teeth grow through.

Just like babies, they want to chew on stuff. You can actually buy a range of teething toys which you can see featured elsewhere on my blog.

Handy Hint: Read this guide on how to stop a Frenchie from chewing. It contains 8 tips in more detail which we used with Claude.

You won’t be able to stop them chewing completely during the teething stage. It’s a natural instinct. What you need to do is distract them, give them something else to chew on, or make steps to remove stuff from their reach that they can cause the most damage to.

Here are my tips on how to stop your French Bulldog puppy chewing the items you value the most.

The bottom line is; puppies can do a huge amount of damage when teething. Our dining room table legs still have the scars to prove it! You can see what I mean in the photo below. This was what Claude did:

The positive thing is, as soon as French Bulldog puppies stop teething, a lot of this chewing still stop.

Warning: If your French Bulldog continues to chew after the teething stage, it could be the sign of a nutritional problem or even stress. Ailments such as worms and upset stomachs can also lead to this behavioural trait.

Here are a few more questions relating to teeth which will help you during the different stages, and once the adult teeth have grown through.

Should you clean French Bulldog’s teeth?

The dental health of your Frenchie is important. This breed can be prone to a variety of health problems, with dental issues being quite near the top of the list. They can develop oral diseases, and at the bare minimum I recommend an annual teeth cleaning visit to the vets.

In addition to the once a year cleaning, you can also buy dog-friendly toothpaste and tooth brushes, plus use dental chews to help their teeth stay healthy.

How many teeth do French Bulldogs have?

French Bulldog puppies have 28 milk teeth which will be lost in the teething stage ages. Once the milk teeth have fallen out, Frenchies will grow 42 adult teeth in their place.

What other owners say

I am the members on a few Frenchie Facebook groups, and the topic of teething comes up a lot! Here are some questions people have asked, with some of the best responses underneath.

“While we are sympathetic with our pup’s teething problems, the biting is getting bad. We have a toy Kong that he has no interest in, and a Nylabone and some soft toys that he enjoys, but he really wants to chew on fingers, hands and toes mostly. What have others used that helped with the biting and teething phase?”

“You should try frozen carrots and bully sticks as they work really well. Another idea is to soak a wash cloth in broth or just plain water and then freeze it for them. With the Kong toy, you should really put some food in the middle of it too – peanut butter (xylitol free) is great for this. We also bought special teething treats with clove oil in and puppy teething gel. And I believe ice cubes went down well too.”

“Is this normal for our Frenchie to still be chewing like crazy on his back teeth? He is 7 months old and is teething like mad. I read online that they have all their adult teeth by 4 months but I’ve never seen him lose his back molars.”

“Dogs will chew even when not teething. They just love to chew anything and everything. My boy teethed until 7 months. He will be a year old in July and has one more back tooth poking through finally. But it could also be secondary teething. The jaw is growing and the teeth are moving into their final place. With my dogs they tend to want to chew on harder things than when the puppy teeth fell out and new ones broke through.”

“I’ve got a ten week old Frenchie and I know she’s teething and she’s got all the teething toys. But she constantly bites me, but not other people. Any help would be appreciated!”

“Say “NO BITE” and move her away from you. They should never be allowed to put their mouth on you. If allowed to do it, after 3 times it is a habit and much harder to break and they are very stubborn but also very smart and so darn cute. They will outsmart you if you’re not careful. Lots of chew toys. I also used to use a spray bottle to spray her when she tries to bite and it’s massively helping! They do learn biting from siblings. You will have to teach her what’s a hard bite and what a soft bite. Give her time. They are stubborn little monsters at time.”

At the age your Frenchie starts to teethe, he’s going to be in possible discomfort. We were lucky with Claude, as he didn’t appear to be in a lot of pain. He did chew though. We found blood spots, loose teeth, and as you can see from the photo had some damage to deal with!

At this time of their dental development, your Frenchie puppy will need your love and support, plenty of chewable toys, patience, and understanding.

Losing your temper with a puppy that has chewed something to help reduce his pain will lead to a stressed and fearful dog.

However, it really won’t seem like this stage lasts for long, so once those adult teeth have grown through, help you dog take care of them. This includes regular health checks and a good diet.