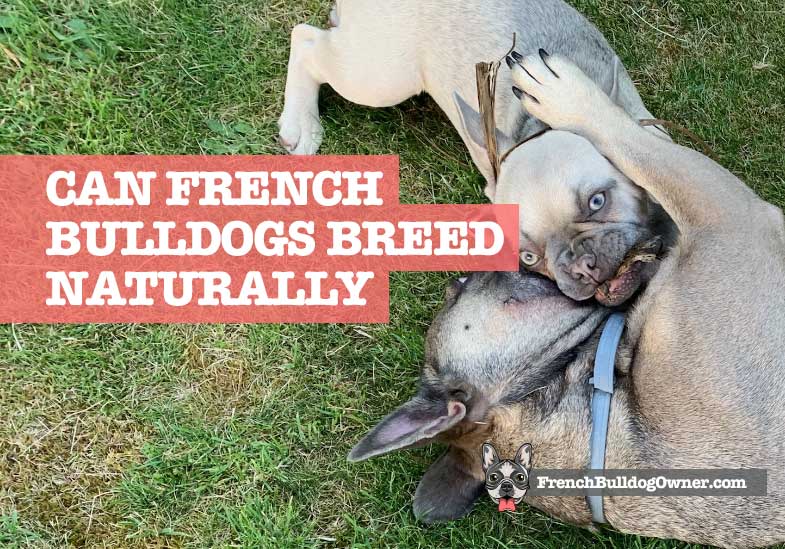 With their unique look and adorable size, French Bulldogs are one of the most popular pet breeds we see today. Given how sought-after they are, you’d think that there would be countless breeders out there – but this isn’t the case at all due to the difficulty involved in mating and breeding them.

Many owners will think breeding Frenchies is a quick way to make a buck. However, this is before they realise the problems surrounding French Bulldogs being able to breed naturally and mate or reproduce under their own steam.

Can French Bulldogs breed naturally? It is very hard for Frenchies to breed by themselves. The way in which they have been bred, leads to difficulties in them being able to mate and reproduce themselves without the aid of human intervention.

Why can’t French Bulldogs mate naturally or breed and reproduce on their own?

Frenchies have been bred down the years to such as an extent that their physical characteristics have changed significantly. Whilst both male (stud) and female (bitch) French Bulldogs can be fertile, they aren’t actually built to breed naturally.

The reason why French Bulldogs cannot breed on their own is due to the way they have been bred. This has resulted in short legs, a compact body and narrow hips. The male Frenchie cannot mount the female efficiently in order to reproduce.

It’s not unheard of, and there will be some examples where two Frenchies have managed to reproduce naturally and by themselves, but it is extremely rare.

In fact, a breeder I spoke to even advised that you should not force the issue. If you do, it can lead to the dogs overheating!

And it’s not just the Frenchie’s inability to mate naturally which leads to this reproduction issue. The breeding also means that giving birth is something that also needs human assistance.

The female Frenchie is at great risk of harm if she has a natural birth. The puppies are also at risk of death due to the narrow birth canals – you can read more about this and watch a video in my post about natural Frenchie births.

So, in short, can you breed French Bulldogs naturally? Yes, but it’s almost unheard of and is extremely rare. Most breeders use artificial insemination.

As you can imagine, French Bulldogs are hard to breed, and it can also be very expensive. If you want to become a breeder for French Bulldogs, the process is actually a lot more complex than shutting them in a room together and letting nature take their course.

In the case of studs, although they have working penises and testicles and can indeed produce semen, it is difficult for them to mate.

This is because they are unable to properly regulate temperatures due to their short noses and short coat. So, whilst it isn’t impossible for French Bulldogs to copulate, it is something that vets strongly discourage due to the various barriers and risks involved.

Indeed, for bitch French Bulldogs, although they have a womb, eggs and ovaries, it isn’t just a case of them getting pregnant. Given that the breed is characterised by narrow hips and large heads, the pregnancy as a whole as well as the process of giving birth is extremely risky for the mother – again, it is possible, but is strongly discouraged by vets.

The breed is also known for their lack of maternal instincts around their puppies (which may be the result of the bypassing of the natural birth process).

Consequently, the most common route that professional French Bulldog breeder go down is artificial insemination and a caesarean section.

This solves a lot of the aforementioned barriers in copulation, pregnancy and birth for French Bulldogs, but that doesn’t mean the idea of becoming a French Bulldog breeder should be taken lightly.

Artificial insemination and caesareans are both incredibly expensive procedures. Also, with the French Bulldog breed being associated with various medical issues, it could be that any puppies born have similar genetic issues.

Before undertaking the responsibility of breeding a French Bulldog, you should always make sure that you have the time and finances to see the process through without there being any detriment to the mother.

The remainder of this article will explore the breeding process itself and is designed to inform rather than be a substitute for any actual medical advice.

How do I know if my French Bulldog can be bred?

The intervention of breeders over the years has meant that entire dog breeds which would have never come about naturally are now commonplace. French Bulldogs are one of those so-called ‘man-made’ breeds.

French Bulldogs were made by crossing terriers with English Bulldogs, and an unfortunate side-effect of this non-natural breeding is that some Frenchies have birth defects or other genetic issues as a result.

Because the breed is flat-faced with shorter-than-normal snouts, they are known for having breathing issues. Lots of French Bulldogs also suffer from allergies and problems to do with their eyes, joints and bones.

This is why it is especially important to test your French Bulldog for any genetic defects before breeding them. Even if they don’t themselves have any complications, they may be the carrier of a faulty gene which could then potentially pass on to any puppies they produce.

Although different breeding organisations have different guidelines on genetically testing your Frenchie, it is generally recommended that you undergo the following process before attempting to breed them:

If you find that your French Bulldog has any genetic issues, breeding them would be extremely irresponsible.

Furthermore, you should work to establish whether your Frenchie is the result of two closely related dogs (like siblings) conceiving. If this is the case, this has the potential to cause more potential genetic issues for any offspring further down the line.

If you found this article informative, you might want to look at the answers to some of these related questions below.

How do I get my French Bulldogs to mate?

The short answer is, you don’t. Avoid letting your Frenchies mate naturally.

Instead the question should be how you select two French Bulldogs to mate. In simple terms you should:

How many times can you breed a French Bulldog?

A female French Bulldog is said to be able to breed twice a year, but because the caesarean and pregnancy can take a toll on the animal, it is recommended to wait at least 18 to 24 months before breeding them a second time, and so forth.

You can read more about this in this blog post about breeding regularity.

How old does a female French Bulldog have to be to breed?

Responsible breeders recommend that female French Bulldogs should be at least 2 years old before you can consider breeding them.

They say that it’s potentially unsafe to breed them if they are younger than this and should have gone through a couple of heat cycles first.

Breeders also recommend you don’t breed Frenchies who are 8 years old or older.

When can a male French Bulldog breed and mate?

Male French Bulldogs do not mature sexually until they are aged around 15 months old. At this age they are more than capable of breeding – albeit by artificial extraction and insemination.

Male Frenchies can actually produce sperm at a younger age, sometimes as young as 6 months – but it is not advisable to breed them at this age.

Is it safe to breed French Bulldogs?

Is it safe to breed French Bulldogs, but not naturally. Due to their genetic make-up, you should not let your Frenchies mate and reproduce naturally but instead use artificial insemination followed by C-section delivery.

Breeding Frenchies can be a profitable business, and because of this, a lot of unscrupulous breeders do get involved. Due to French Bulldogs being unable to breed naturally, they are a more valued breed. This means they can be sold at higher prices.

However, you should bear in mind that there will be a lot of medical expenses involved in the breeding process.

How much does it cost to breed a French Bulldog?

Estimate will vary, but I would imagine it can cost anywhere between $700 and $2500 to breed French Bulldogs. You will need to account for C-section costs, medical bills, vet support, and more.

How many puppies do French Bulldogs have?

Due to the smaller build of French Bulldogs and their narrow hips, their litters are one of the smallest compared to other breeds. On average, female French Bulldogs have litters of 2 to 4 puppies, although in rare cases it has been known for litters to be as big as six.

You can read more about this in my guide to Frenchie litter sizes.

Although naturally breeding and reproduction of French Bulldogs is physically possible, it is not only difficult for the animals to do, but can also be very dangerous and harmful for them.

A responsible French Bulldog breeder should therefore avoid trying to force the natural route and work closely with their vet – discussing procedures like artificial insemination, caesareans as well as how best to care for your French Bulldog bitch and their puppies whence they arrive.

If you are thinking of purchasing a French Bulldog puppy, you should also be wary of buying from a breeder that seems to cut corners with medical procedures. It can mean the puppies are unhealthy and the parents are mistreated.

To help you as a potential owner, I’ve prepared the questions you need to ask a Frenchie breeder.