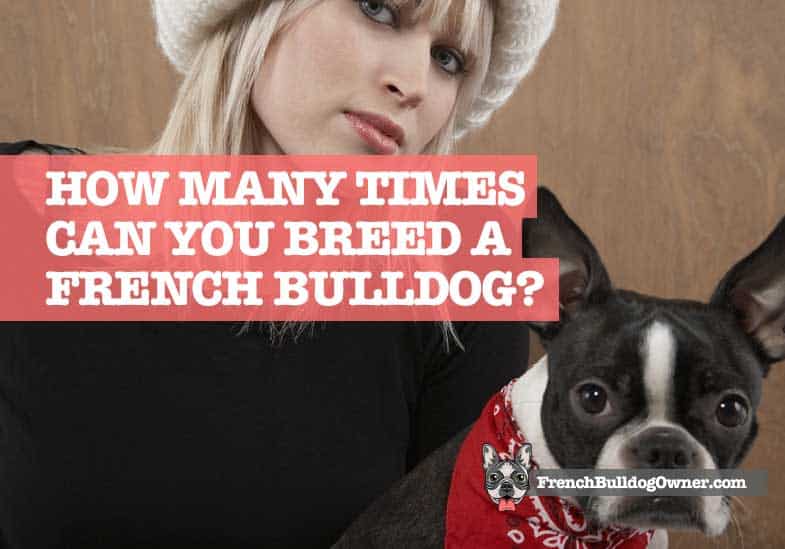 I am not a breeder of Frenchies. However, there are many irresponsible breeders out there including French Bulldog owners looking to make a quick buck. One of the most common questions people like this ask is how many times you can use a Frenchie for breeding. Professional and qualified breeders will tell you the following:

How many times can you breed a French Bulldog? Responsible Frenchie breeders will not breed their French Bulldog any more than 3 times in a lifetime, and only once every 18 months at a minimum. Any more than that and the dog will struggle to recover physically, and possibly even mentally.

Why you should not breed French Bulldogs too much

The reasons for the minimum amount of times you can breed a French Bulldog are varied, but all boil down to care and love. I’ve already touched on a couple of the reasons why you should not over-breed a Frenchie, but let’s look at them in more detail.

1. The danger of too many C-sections

The majority of French Bulldog puppies are delivered via Cesarean section. This is due to the way in which the female Frenchie has been bred herself over time. They have narrow birth canals and the pups have large heads. C-sections are the easiest and safest way for them to deliver a litter.

As a French Bulldog breeder, it is totally irresponsible to put your female Frenchie through too many C-sections. The risks are as follows:

Did you know? C-sections can be very expensive. Read this guide to how much you should expect to pay your vet to deliver a Frenchie litter via Cesarean section.

2. Bodies need time to repair themselves

The birth and nursing period post-pregnancy is critical to the health of your French Bulldog. Giving birth and becoming a mother is a highly charged time both mentally and physically.

As well as the scars from the C-section, your female will need to recover from feeding her litter and will also have to re-grow parts of her uterus and build her muscle tone back up.

During the early stages of motherhood, many females will lose muscle tone and even patches of fur.

This is why it’s not recommended that you breed a Frenchie any more than once every 18 to 24 months, giving them enough time to recover.

On a pedigree note, you won’t also be able to get the puppies officially recognised as a pure French Bulldog breed by the relevant associations if she has given birth in the previous 12 months.

In the UK we have an organisation called The Kennel Club. It acts as a governing body for pedigree dogs, holding the national register of all breeds.

They are very explicit about how many times you can breed a French Bulldog officially, where they will be prepared to register the puppies.

“The Kennel Club will not accept an application to register a litter when the dam has already whelped 4 litters. The Kennel Club will no longer register any further litters from any bitch which our records show has already whelped 4 litters. Where the number previously recorded is 4 or more, the application will be rejected.”
(source: thekennelclub.org.uk)

They also go on to state that they will not register pedigree litters where:

How old does a Female French Bulldog have to be to breed?

When can French Bulldogs breed and what age should they have to be?

Frenchies can safely breed from the ages of 2 and a half years up to 8 years of age. At this point they will have gone through a number of heat cycles and will be ready to breed.

For male Frenchies, they don’t become sexually mature until they are around 15 months old. They can produce sperm as young as 6 months, but you need to wait until they are older to breed them successfully.

How many times a year can you breed a French Bulldog?

Having spoken to professional Frenchie breeders, the general consensus is that you should only breed French Bulldogs once a year – and even that frequency is probably far too much.

A healthy French Bulldog should be able to produce a litter at every heat (here’s a guide to Frenchie heat cycles), but that doesn’t mean it’s safe to do so.

The reason being is that the female Frenchie needs to recovery after giving birth. Just because she has come into heat, that doesn’t mean her body will be able to handle a new pregnancy so soon.

As I mentioned earlier, you should only really breed a French Bulldog once every 18 months to 2 years. Anything more than that could be considered cruel, and this extended healing time gives her the chance to recover, be healthy, and be happy without the stress of frequent C-sections.

A breeder I spoke to gives the following guidelines to the breeding cycle and frequency:

I’ve spoken in depth about Frenchie litter sizes, C-sections, and pregnancy elsewhere in the blog. If you are considering breeding your Frenchie and want more information on the French Bulldog breeding cycle, here’s some more information I’ve published.

I hope I’ve given you all the information you need to know about how many times you can breed a French Bulldog, including the best age to do so, and the risks involved in frequent pregnancies.

Frenchies are a breed that are renowned for health problems (here’s a huge list of possible complications).

The bottom line is this; the French Bulldog breeding cycle is both complex, risky, and should not be taken lightly. Please don’t try to breed your own Frenchie to make a quick bit of money. There are enough of them right now, and it should not be something you view as a revenue generating exercise.