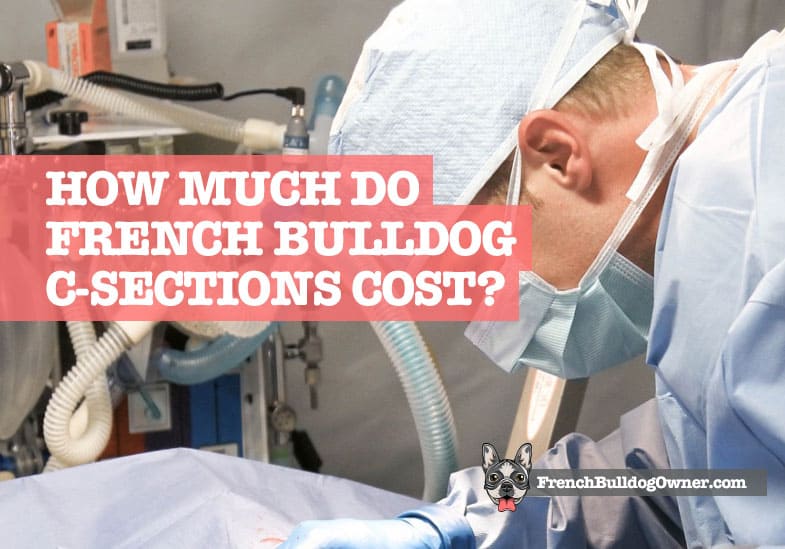 Due to the way in which French Bulldogs have been bred, the majority of puppies will be born via a C-section. Most female Frenchies cannot have a natural birth, so Cesarean sections are almost always needed, and they are expensive, but costs will vary.

So why the variance in the cost of a C-section for a French Bulldog?

In the main it depends on whether you have the Cesarean section booked in and planned in advance. If you do, then the cost will be lower. However, if it’s an emergency C-section and one that needs to take place out of hours of the vet’s normal working day, expect to pay more.

You will find that in any country, the cost of a French Bulldog’s C-section can be expensive and tends to have a wide range. In the United States, the cost can go up to several thousand dollars, although generally they fall into a range up to $2,000.

The reason for the expense is that the process is a surgery under anesthesia. The mother and puppies have to be carefully monitored, and the surgeon needs to be skilled, as the longer your pet is under anesthesia, the greater the risk is.

In the United Kingdom, C-sections tend to cost between £490 and £1,500 pounds in studies surveying veterinarians in the country. The average cost during regular working hours for a non-emergency C-section was approximately £800 pounds.

In Australia, the cost of a C-section also has a wide range, with some hospitals performing the surgery for as little as $600 Australian dollars during regular hours or increasing to $1000 for surgeries after-hours.

Different fees may also be associated with the C-section that add to the cost of the procedure, including office visits or consultations. Medications are often additional, such as pain medications and antibiotics. Unplanned situations also often add to the C-section cost, including a puppy getting stuck in the birth canal, which poses a serious risk to both the puppy and the mother.

If you are able to plan on your dog having a C-section, such as if you are breeding a Frenchie, it is possible to call around and find the cheapest options for the surgery.

That said, you will want to make sure that the location is not going to cut corners, and that your dog will be monitored carefully during the entire procedure.

Some hospitals and surgery sites require that your dog be spayed at the same time as they have the C-section. This would prevent you from having future litters with your female and is not ideal for breeders.

These locations may have an option where your dog does not have to be spayed but will often cost you additional money, so you should ask before your dog undergoes surgery.

What does C-section surgery involve?

A C-section is also known as a Cesarean section or a hysterotomy. It is a surgery that takes place under anesthesia, where unborn fetuses are removed from the uterus manually, rather than having them birthed naturally via vaginal delivery.

The uterus is cut open during the process to remove the puppies, where they are then generally passed off to waiting assistants or veterinarians to be cared for and resuscitated.

General anesthesia is used, typically with short-acting medications and gas anesthesia. To keep your pet comfortable, local anesthetics may also be used, especially along the incision line. This surgery can last for a variable amount of time, but it typically occurs over the course of 45 to 90 minutes.

C-sections are often planned in dog breeds such as Frenchies and other Bulldogs, where the dam may have issues whelping the puppies.

This surgery also occurs regularly as an emergency procedure, especially in cases where the natural delivery has started but complications arise.

It tends to be safest when the procedure is planned because you have no waited for complications, such as a puppy getting lodged in the birth canal, to arise.

When does the C-section occur?

Many French Bulldog breeders carefully calculate when to breed their French Bulldog and when they are due. The normal gestation period for a dog is 63 days, although some dogs may deliver earlier than that, at 61 to 62 days.

The first step in the breeding process is to know when to breed your dog, which is generally done with progesterone testing, especially as many French Bulldogs undergo a silent heat that cannot readily be detected.

Did You Know? The are some tell-tale signs you can look for to tell you when your Frenchie is in the heat cycle. Read this guide to French Bulldog heat cycles and signs.

The progesterone testing greatly narrows down when ovulation will occur to direct when the Frenchie should be bred. Because of this, it narrows down the time period for whelping, usually to within 3 days, so breeders know when to start planning on their female delivering.

Progesterone is a major hormone associated with the uterus being ready for breeding and is tested for via a simple blood test that your veterinarian can perform.

The main sign that delivery is about to start is a drop in rectal temperature, so breeders should monitor the female closely, usually starting at around 59 days after breeding. The normal temperature for a dog is between 100 and 102 degrees Fahrenheit.

Most French Bulldog C-sections occur at the point that the dog has her temperature dropping below 98 degrees Fahrenheit. At this point, you may see other signs that your female dog is going to whelp soon, such as not eating, digging at her bed, and potentially acting depressed.

Are all French Bulldogs born by C-section?

Not all French Bulldogs are born by Cesarean section. Research conducted by the Kennel Club suggests that it is a high percentage though, with it being over 80% of Frenchies being born via C-section.

“The study on dogs looked at 150 breeds. There were seven breeds where the reported caesarian rate was zero. Most dog breeds had a relatively low rate of caesarians, but twelve breeds were identified as having rates greater than 40%. These included St Bernard’s at 41.2% and Irish Wolfhounds at 40.3%. Three breeds were singled out as having caesarian rates of over eighty per cent – the French Bulldog at 81.3%, the Bulldog at 86.1% and the Boston Terrier at a remarkable 92.3%.” source: Telegraph.co.uk.

Why do French Bulldogs need C-sections?

The main reason for Frenchies needing a C-section lies within the conformation of the dam, with these dogs having slim hips and large heads, as well as wide shoulders. The heads of the puppies are often unable to pass through the female’s pelvic canal.

This surgery poses a risk to the mother and puppies, as anesthesia can be dangerous even at the best of times.

The narrow hips of these dogs often also mean that they require artificial insemination. The stud dogs generally are unable to mount the female for any length of time, if they can at all, which means that they cannot establish a tie.

C-sections can be beneficial for French Bulldog litters and are often the choice for breeders over free whelping, where they deliver naturally.

Although there is a risk from the anesthesia, a planned C-section produces less stress on the mother, which means the puppies are less stressed. Stress can lead to puppy fatalities, which is why less stressful options are desired.

French Bulldogs tend to have three puppies on average in their litters. When free whelping, the uterus is put under extra stress, which can lead to stretching and weaknesses in the uterus, which often does not bounce back as readily as it does with a C-section.

This stretching can also lead to weakened areas in the uterus, which can tear with future litters, especially if they are large litters.

Another common reason for a C-section is that there is no doubt about whether or not all of the puppies have been delivered.

This prevents the female from delivering a dead puppy several days later and helps minimize the risk that she will develop a severe uterine infection, which can be life-threatening and difficult to treat.

Do all French Bulldogs need C-sections?

The danger here is that the pups can get stuck. This can be fatal for both mother and puppies.

Why are French Bulldogs so expensive?

A lot of the expense of a Frenchie puppy is due to the fact they will almost always be delivered by a C-section. As I’ve already highlighted, the cost of a Frenchie Cesarean section can be very expensive.

There is also the aspect of the insemination process. As I’ve highlighted, many Frenchies will need to be artificially inseminated which will incur further costs and complications.

How long are French Bulldogs pregnant for?

Frenchies are usually pregnant for between 58 and 63 days. I’ve put together a more in-depth guide on this which includes a comparison table showing Frenchie litter sizes versus other dog breeds.

How do I know if my Frenchie is pregnant?

If your Frenchie is pregnant, please do consider having a Cesarean section. Yes, it will be expensive, but for the sake of the mother and puppies, it’s the best route to take.

Now you know how much a French bulldog c-section costs, talk to your vet to see if you can get it booked in. It will be far cheaper than waiting until it’s too late – emergency C-sections will be stressful, and in some cases, 3 times the cost.