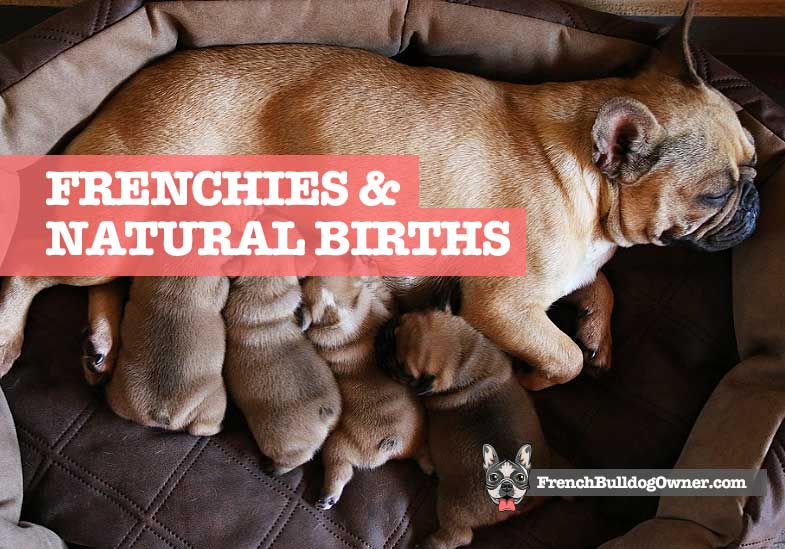 If you have decided to mate your female Frenchie with a stud, you’re probably wondering what comes next and whether your French Bulldog will be able to give birth naturally. In most cases, Frenchies will deliver by C-section, but there will be exceptions to that rule.

In this guide I am going to go into more detail on natural births, what the French Bulldog labor and delivery looks like, plus show you a video of a Frenchie delivering their puppies.

Why Frenchies don’t tend to give birth naturally

Frenchies tend to need artificial insemination to mate. It’s due to their narrow hips which makes mounting difficult. This same physical trait is also one of the main reasons why natural births are so rare.

French Bulldogs have narrow hips and large heads. This means puppies are at risk of getting stuck in the birth canal (dystocia). This can lead to very difficult labor, with the possibility of death not just to the puppies, but also the mother.

If you are thinking about breeding your Frenchie, please do consult with your vet. They will be able to give you advice on how likely it is that your French Bulldog can give breed and give birth naturally, and then create a pregnancy plan. It will be highly likely that they will recommend you get a C-section booked.

If you decide to opt for a natural labor you will find this video of a pregnant French bulldog giving birth really fascinating. Like I’ve said though, it’s quite unusual as only around 80% of Frenchies will have a natural birth.

You can see the puppies being delivered with the help of the Frenchie’s owner. The female Frenchie cleans the puppies straight after labor and then even plays with them after giving birth towards the end of the video.

French Bulldog labor: what to expect

If you’re not opting for a C-section and have chosen the natural labor route after consultation with your vet, here’s what to expect.

One of the most common signs of labor will be a drop in temperature. You can expect a drop of around one and a half degrees from 38.5°C to 37°C.

Vets say you should take your Frenchie’s temperature a couple of times a day in the week leading up to the due date. You will need a rectal thermometer to do this.

I can’t stress this enough, but please have a vet on standby.

Before labor you will see a lot of panting, walking around, and the restless behavior. Once labor starts, your Frenchie will shake and tremble, lie down, and then start to push. If she is pushing for 20 minutes and you can’t see the puppy’s head yet, you should call your vet as there could be labor complications.

You will need to help clean the puppies, cut umbilical cords and then tie them up. You will also need to clean the area up with paper towels.

After labor, your Frenchie will clean the puppies, and they should eventually start to feed from her.

Do I recommend your French Bulldog giving birth naturally?

I am not a breeder and I am not a vet. In fact, I have ethical questions myself over Frenchie breeding and how these dogs have developed over the years. That’s a discussion for another time though, so let’s just deal with some practical advice first.

According to the Royal Veterinary College (view website) Frenchies are almost 16 times likely to have a difficult pregnancy and natural birth than other dogs. That can suffer complications such as dystocia when the puppy’s shoulders get stuck in the body, which can mean a slow labor or birth.

As a result, French Bulldogs are 2.4 times as likely than a standard breed to require a C-section. Many of these will have to be emergency operations when an owner opted for a natural French Bulldog birth.

This is why it’s very rare for French Bulldogs to give birth naturally, and the majority of breeders will opt for an expensive, yet necessary C-section.

The potential health complications and risks are something that you should consider seriously. There’s a very informative article on the Today’s Veterinary Practice website which goes into more detail on the research and studies behind French Bulldog’s giving birth naturally. Here’s quote from that article:

How long does it take for a French Bulldog to give birth?

All dogs are different and so the time it takes a Frenchie to give birth will vary drastically. Having spoken with our local vet, he said the majority of dogs will give birth (from the point the puppies start to deliver) between 20 minutes and a couple of hours.

In the video of a French Bulldog birth I show on this page, the entire delivery took around 10 minutes. However, I would imagine this is quite a rare scenario given how difficult French Bulldog labor can be.

Whilst it’s very uncommon for Frenchies to go into labor naturally, it can and does happen in around 1 out of 5 pregnancies.

Do I recommend you proceed with a natural birth? No, but then I am not a breeder myself, but can only go on the guidelines I have seen published by professional vets.

Now you know a little bit more about French Bulldog labor and birth, you might want to check out these other articles I wrote on similar topics.