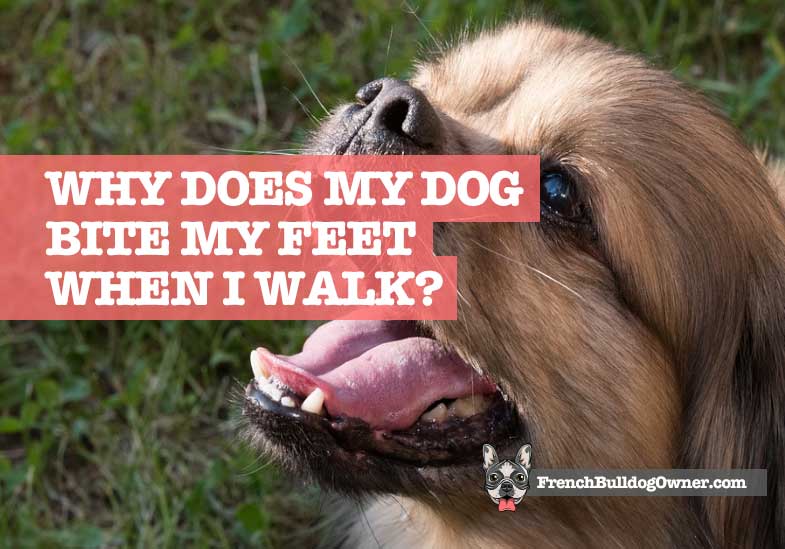 When Claude the French Bulldog was a puppy, he had this annoying habit of biting at my heels. Thankfully he seems to have grown out of it and it was probably due to his teething stages. But with other dogs, they can be obsessed with feet and even bite ankles. It’s problem behavior. But why do dogs nip at your heels, and can you stop it?

Why does my dog bite at my feet when I walk? Ankle and feet biting can will often be a hereditary trait from when dogs used to be used for herding or guarding livestock. Biting feet is emulating the herding behavior they were initially bred for. It can also be due to puppy teething, or for the dog to assert authority over you.

Why does my dog bite my feet when I walk?

Some dogs will develop a fascination for human feet and ankles at an early age. As they start to teethe, they develop a liking for using their mouth instead of their paws to pick and move objects.

Handy Hint: For more information on teething, read this guide to the different stages of teething and what to expect from your puppy.

This might be cute at first but may grow into an aggressive and harmful behavior as they develop into adults.

Why do dogs nip at your heels?

Some canine breeds are “hard-wired” to nip at peoples heals. Some of them include Corgi, Aussie, Dachshund, Maremma sheepdogs, Great Pyrenees, Border Collie, Bernese Nountain dogs, and heelers.

An adult dog that nips at its owner’s heels was probably never taught how not to do so when it was a puppy. It’s possible that its owner didn’t teach it how to nip gently or chew toys either.

Dogs spend a lot of time investigating, chewing, and playing with objects. They use their mouth and teeth to investigate objects as well as people’s feet. This behavior is often cute and harmless when the dog is less than seven weeks old. After that, it becomes endearing.

Remember that hitting and slapping your dog for nipping may cause him to bite more aggressively. Avoid subjecting him to any forms of punishment such as whacking on the nose, scruff shaking, and sticking fingers down his throat. These may scare him.

Should your dog ever wound anyone through aggression or play, it’s advisable to seek medical help. A tiny break, tear, or puncture on your skin increases the chances of infection.

Wash the injury immediately before applying any antibacterial ointments. Use a sterile bandage to cover it.

If you experience any swelling, pus, or redness, consult a medical expert. Deep bites that do not stop bleeding may require stitching.

If you’re unaware of the dog’s vaccination records, seek medical attention as you might need a tetanus shot.

Why does my dog attack people’s feet?

For some dogs, biting can be a form of aggression that develops out of frustration or fear. Your dog may feel anxious when someone passes him on the street. For other dogs, biting at other people’s feet is actually a fun game.

It may not be easy to differentiate between biting that results from aggressive behavior and one that is playful.

Playful dogs have a relaxed face and body. There’s often no tension in their facial expressions. Their biting is also less painful and less serious. An aggressive dog will have a stiff body accompanied by quick and painful bites.

To stop you dog from attacking people’s feet, train your dog to perform an alternative behavior and reward him for it.

For example, you could ask him to stay or sit when a person approach. You may need to carry treats during practice. The idea is to eventually treat your dog once the person has passed.

With time, he’ll be able to relax and part ways with his ankle-biting habits.

How to stop your dog from biting your feet

When your dog starts biting your hands and feet, it’s important that you find a way of redirecting this behavior. Correcting this early prevents it from becoming the dog’s natural way of interacting with people.

Biting in adult dogs is harder to solve than in puppies. This is because the former are less sensitive to reactions and more difficult to control due to their large physical size.

Here are five solutions that worked for me and my dog:

When dogs are mouthing each other, it’s often harmless. However, when the mouthing turns into painful bites, the dog on the receiving end yelps to stop the other one from biting more. You can emulate this by making a yelping sound whenever your dog bites you.

Once it releases, ignore it for about twenty seconds before going back to play. You can substitute the yelping sound with an alternative verbal deterrent.

Don’t do this more than thrice every fifteen minutes. Give your dog a time out so that it learns that rough play isn’t allowed.

Moving or jerking your feet encourages your dog to keep biting. The more you resist, the more your dog wants to bite. Stop in your tracks when you see your dog approaching. Resist any sort of movement. You become less exciting to play with.

This prevents the dog from latching on you or treating you like a tug toy.

3. Give them chew toys

Carry your dog’s favorite toy and keep it in your pocket whenever you’re around him. If he starts to bite your feet, stop moving and wave the chew toy at him until he gets distracted. Once he grabs or latches at the toy, continue moving.

Provide different and safe chew toys that he can gnaw instead of clinging to your feet all the time.

Here are some great teething toys I recommend for ankle and heel biters.

Rather than wrestling with your dog and engaging in rough play, encourage games that have little to no contact. This can either be tug-of-war or fetch. A game of tug-of-war prepares your dog to deal with frustration and arousal.

You’ll need to follow a strict set of rules to make sure the game is safe. Once you can play safely, carry tug toys that you can use to redirect your dog to whenever he starts to bite your feet.

With time, he’ll look for a tug toy whenever he feels like biting feet, ankles, or heels.

If the above solutions don’t work, consider using a taste deterrent. Spray it on areas of your clothing and body that your dog is fond of biting.

Once he starts nipping at your heels, stay still and wait for him to experience the bad taste produced by the deterrent. Praise or reward him once he lets go. Use the deterrent for a period of at least two weeks.

After multiple experiences with the bitter taste, your dog will most likely stop with the biting behavior. Taste deterrents can either be spicy hot or bitter.

For some dogs, it’s the worst thing they’ll ever taste. For others, it’s a treat. Watch how your dog reacts to them. Look out for drooling, retching, or shaking of the head. These are signs that he doesn’t like the taste.

Now that you know why your dog bites your feet when you walk, why they attack other people’s feet, and where this ankle and heel nipping behaviour comes from, here’s some more information on the matter.

Why is my dog obsessed with feet?

Your dog may spend much of its time at your feet as an indication of submissiveness and domesticity or, as an attempt to show you that they love you and want your approval and attention. This foot obsession is more common than you might think.

Sometimes, your dog may want to gather information by noting your scent and sweat. Other times, it may be to look for food or relieve stress through the release of endorphins.

Why does my dog lay on my feet?

Dogs may lay on your feet to mark their territory. This is a common behavior that develops from your dog’s natural ‘pack’ instincts. In the wild, dogs sleep close to each other as a way of staying warm and protecting themselves.

Often, the leader of the pack has the best spot and the rest will lay as close as possible to him. When your dog lays close to you, he perceives you as the leader.

With Claude the puppy, spending time with him was fun, the biting occasionally got out of hand and became really annoying and frustrating. He will still occasionally bite my feet when I leave a room as play, but overall, he did grow out of heel nipping and ankle biting.

If you find that none of the methods for stopping a dog nipping at your heels described here work, you might have some behavioral issues with your pet that only a vet can remedy.

Handy Hint: Read this guide that teaches you how to train your French Bulldog to stop biting.