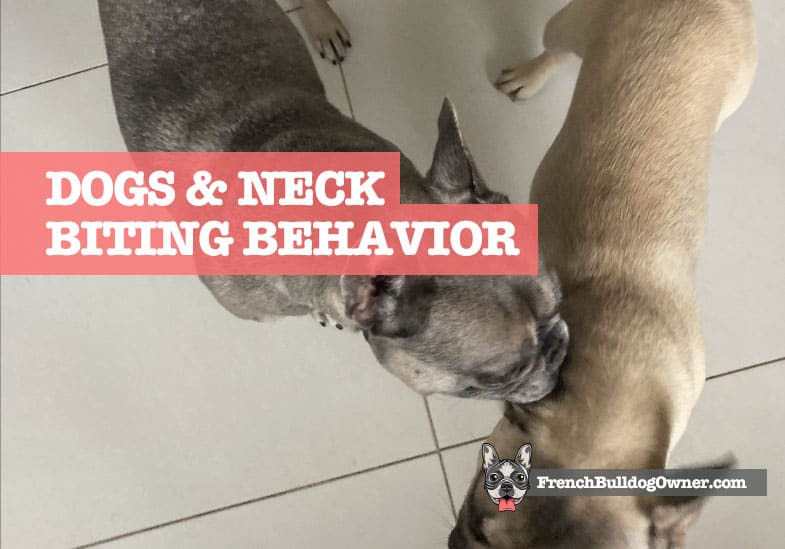 We have two dogs in our house, currently an adult Frenchie and a puppy. One of the best things is seeing them play, particularly when the older dog is pinning the puppy down by his neck and play biting at it.

However, when the older dog is biting the puppy neck, it can be hard to understand where play stops, and aggression starts. It’s a concern, as a dog’s neck is an area where damage can be done if neck biting is too hard.

But please don’t get too worried. In most cases, when a dog bites another dog’s neck, it’s not something to be concerned about, unless the dog neck biting dominance ratchets up a level… all of this is explained below.

Why do dogs bite each other’s necks?

When a dog bites another dog’s neck it’s perfectly normal behavior and is usually a part of their play. Our older dog is biting our puppy’s neck quite gently during play – it’s mouthing, the type a dog might do with your hand.

But keep an eye on things because play can quickly turn to aggression. In fact, some dogs will try to exert dominance over the other. This is what’s called dog neck biting dominance, and is used in play, but more aggressively during a fight.

As an owner of dogs, you need to know what the subtle clues are when dog neck biting can change from play to aggression. Your dogs will give off body language to show how they are feeling during the behavior.

So, that’s a very simple overview of what it means when a dog bites another dog’s neck or puts his mouth around the other’s neck. If you want to know when a little nibble is likely to turn into a nasty bite or neck wound, possibly even with a shaking motion… it’s all here.

Is it normal to see a dog pinning another dog down by the neck?

There are two occasions when you might see a dog pinning another dog down by the neck. One is play; one is aggression. Providing it’s play, there’s nothing to worry about unless it escalates to neck biting combined with shaking of the neck and head.

You need to know when the time to intervene is… here’s what the two look like and differ.

Dogs of all ages will play fight. It’s a release for them, and when older dogs bite at puppies during play, it’s part of the learning process, and a little bit of dominance thrown in for good measure.

This play teaches puppies how to use bite inhibition. This is where they bite, but with no bite force, and more of a gentle mouthing action. Puppies will quickly learn what the boundaries are and when aggression isn’t something to be used.

Older dogs will also bite at a puppy’s neck just to gently show them who is boss in the home.

Play fighting and neck biting helps dogs (and younger puppies in particular) learn how to socialize with each other. They might run about with the zoomies after each other, do little growls, and wrestle with each other – it’s all just harmless play time.

How do you know the dog neck biting is harmless play?

If you know your dogs, you will know what their happy expressions are. However, if it’s a stranger’s dog doing the pinning down, you might not be so sure. Thankfully there are some shared traits happy dogs all over the world have when playing.

When happy during play neck biting, dogs will:

These are all signs that your dog is ok with another dog biting his neck.

How do you know the dog neck biting is aggression instead?

This is where dog neck biting dominance can turn into aggression. One of the dogs involved might be scared, startled, feeling threatened territorially, or even being protective towards the owner.

When neck biting is aggression rather than play, there are also signs here to watch for. These include:

Then the dog who is having his neck bitten will also show signs that this is not play, and something more serious. These include:

The moment you see a dog biting another dog’s neck and shaking it, the two need to be separated. But do not put your own body between them, as you might get hurt.

One of the more successful ways of parting two fighting dogs is the wheelbarrow technique. Drag the aggressive dog’s hind legs and start to pull them backwards towards you.

This aggressive neck biting will often stem from:

Now you know what to look for, I wanted to go back to play. Earlier I made a point about bite inhibition. This is where your dog controls the amount of force they use when biting down.

Puppies will start to learn about bite inhibition when they are still with their mother and their siblings. Just like human babies, puppies learn about the world around them by using their mouths… putting things in the mouth, chewing, and biting down.

They will also start to playfight with the other puppies, and this is where bite inhibition is learned.

Bite inhibition is not just something used in play though. It also helps puppies and dogs to carry things gently without damaging it. For example, a dog will use less bite force carrying a soft toy than it would a ball.

By learning to control the power like this, they can transfer it to play when pinning another dog down by the neck… gently does it!

So, when you do see your dog pinning another dog down by neck and they appear to be happy, just let them carry on. They won’t bite hard enough to cause a cut, unless it develops into a real fight.

Handy Hint: Did you know that there’s an Internet rumour that the bite force of a Chihuahua to be the strongest in the dog world! Here’s the truth about that one.

How to stop dog from biting other dogs’ necks?

Aside from the drastic action I described earlier where you need to separate the dogs, it’s far better to stop your dog biting other dog’s necks before it happens. This means you need to look at the root causes of why your dog is biting and shaking other dog necks.

Dominance and aggression in dogs will also be due to something. It could be an underlying health issue, anxiety, or fear. I am not a vet, so recommend you talk to them first about worrying behavior like this.

Dog trainers can also help you to curb aggression and will give you tasks to practice which will help your dog to be more social around other dogs.

As a temporary solution, I recommend you buy the dog a muzzle (view on Amazon) – only for when you’re in public with the risk of meeting other dogs. At least that way you know your dog will not be able to bite other necks.

Dogs love to bite each other’s necks. It’s all part of the play and will include nibbling, mouthing, and even little growls. It might even look very rough at times. Our two dogs look like they are at Wrestlemania when they do it.

In conclusion, unless the neck biting dominance and play turns aggressive, there’s no reason to try stop it.

Just be vigilant and look for any signs it could turn.