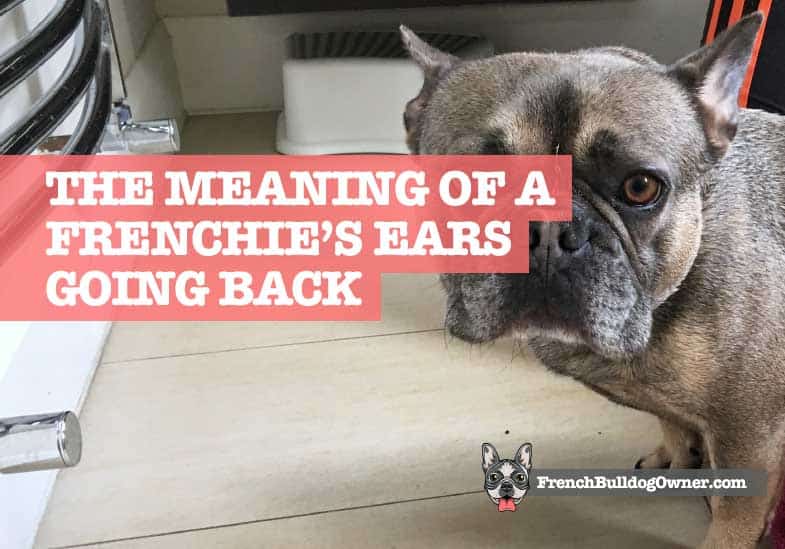 When we welcomed Claude the Frenchie into our family a few years ago, we had never owned a dog before. It was a huge learning curve, and one particular memory still stands out today… what was the meaning of our French Bulldogs ears, what is the meaning when they go back, would they always stand up straight?

First things first; French Bulldogs have very static ears. Just like their faces, you don’t get a lot of expression out of their ears either. But they will go back when they are scared,  nervous, or being submissive of their master (which is not the same as being scared).

Did You Know: Some young puppies will have floppy ears, and it can take some time for them to go back and stand up. You can read more about how and why this happens in this guide to Frenchie ears standing up and what to expect.

However, I have noticed a lot of people searching on Google the following query “French Bulldogs ears back meaning” – I wanted to look a little further into this as it’s not immediately obvious what they mean by this.

They don’t have as much ear movement like other breeds, but Frenchies can still put their ears back with a little bit of swivel.

So, what is the meaning when a dog positions its ears back, and how does this relate to French Bulldogs?

Why French Bulldogs’ ears go back

The majority of dog breeds can use their ears to send a variety of messages about how they are feeling. For example, forward ears tend to suggest the dog is curious or paying close attention to what you’re doing.

If you see a dog with ears back and flat against their head, it’s usually a sign that they are scared, going to become aggressive. or are being submissive. It’s a warning sign when paired with a snarl or bared teeth.

For example, you can see a photo of Claude with his ears back after he had a bath. He was quite scared, as this was one of the first times we had ever used a shower to get rid of excessive mud.

If your dog has ears that are ever so slightly back, it could indicate they are in a playful mood.

French Bulldog ears can also position their ears back when they are scared and frightened.

If your Frenchie is fearful, take a look at the base of the ear to look for any backwards shifts. This could be a sign that they are scared and unhappy.

For example, I recently read a post on Facebook from a lady who owns a Frenchie. Here’s what she said as she was worried about her pup’s ears being back.

“Our boy recently had an operation after being attacked by an aggressive dog. Sometimes when I walk towards him, he puts his ears back like he thinks I’m going to hurt him. I feel so bad I feel like he thought this was my fault I don’t know just a very sad Frenchie right now and I don’t know what to do.”

She was overwhelmed with responses from other owners explaining the meaning of French Bulldogs ears going back. Here’s a sample of responses:

“I’m so sorry this happened. Give him a few days to start feeling safe and more like himself again. Speak to him in a soft calm voice and get down to his level when approaching him. Give lots of love and vet approved treats. You will both get through and heal from this.”

“I’m sure there is nothing he wants more than your love and his ears back means he’s submissive. So, give him lots of gentle love and reassurance that he is safe. It will take time for you both to get through such a terrible trauma.”

“He will keep his ears back for a while. His not blaming you. Just being on his guard. He will come good. Lots of love and affection to make him feel at ease.”

“He just needs extra fuss and time to heal and definitely don’t blame yourself, you got him help and he’s still with you, that’s all that really matters. Lots of treats and cuddles and you’ll both be fine.”

Is my French Bulldog happy or sad?

So, how can you tell how your Frenchie is feeling, and are there any signs to look out for to make sure they are happy and healthy?

Yes, there are, and I’ve written a guide to tell you what signs you can watch for to tell that your French Bulldog is happy.

If your French Bulldog’s ears are back, the meaning is probably down to them being frightened and scared about something. If you can identify what the problem is, and remove it from their life, then there’s no reason why this behaviour should not change.

Give them lots of reassurance, keep them calm, and offer lots of love.

Within a short period of time their ears should stop going back… I promise you.

Handy Hint: You might also be interested in my new guide to French Bulldog deafness. A high proportion of Frenchies can suffer with hearing loss from birth, and it will often depend on the color of their hair.