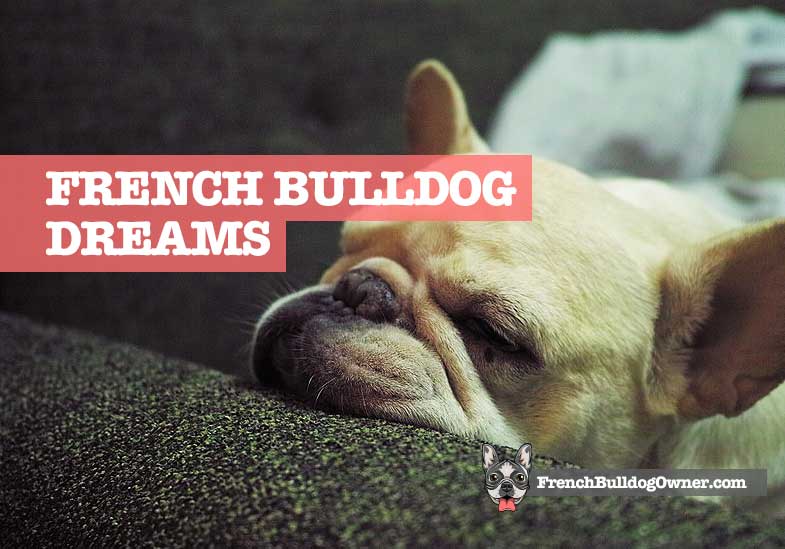 When our Frenchie’s eyes and legs start twitching in his sleep, my wife and I will often joke that he’s having a dream. And to honest, it wouldn’t surprise me if our French Bulldog does dream. After all, he’s usually had a fun-packed day full of new experiences and doggy adventures. What’s not to dream about!?

All joking aside, I wanted to find out whether French Bulldogs do actually dream, what science says, and if they do dream what are they dreaming about? Here’s what I found out.

Do French Bulldogs dream? There is evidence to suggest that dogs do dream. Scientists have tested canine brain waves and found that when sleeping, dogs exhibit similar deep sleep and REM like us, which could indicate your French Bulldog is actually dreaming.

In fact, the research (read more on LiveScience.com) suggests that smaller dog breeds actually dream more than their larger counterparts. Given that Frenchies are a small breed, it’s even more reason to believe they dream when asleep.

It was found that puppies may even dream more than adult dogs. This is because their mind is alive with exciting new experiences with their growing brain trying to process all of this intense activity.

Stanley Coren, a psychology professor at the University of British Columbia and author of “Do Dogs Dream” (see his Wikipedia entry) is a firm believer in doggy dreaming. He said:

“If dogs didn’t dream this would be a much greater surprise given that recent evidence suggests that animals that are simpler and less intelligent than dogs seem to dream.”

The next time your Frenchie is in a deep sleep and starts barking, yelping, whimpering and moving his legs whilst in REM (rapid eye movement) there’s every chance he could in fact be dreaming.

What do French Bulldogs dream about?

Whilst we can only guess what French Bulldogs are dreaming about, we can make a few assumptions based on how they behave in their sleep.

As humans we like to replay the things that have happened in our own experiences. Given that a French Bulldog’s fun involves eating, running, playing and chasing, these are problem what makes up a lot of their dream time.

It could be that twitching and paddling of legs during sleep indicates your Frenchie is dreaming about running, chasing, and jumping. A barking Frenchie who is asleep could be dreaming about interacting with you or another dog.

We will never know for sure of course.

How do I know if my Frenchie is dreaming?

Claude, our own Frenchie, will start dreaming by his eye lids starting to flicker and his breathing will become irregular. Sometimes his eyes will appear half open and it can be quite a strange thing to witness.

The eye flickering is the REM or rapid eye movement I mentioned earlier. This signals that your Frenchie is now in deep sleep mode, the typical time when dreaming will start.

During the REM sleep you will see your French Bulldog start to make involuntary movements, and it’s often the legs that will start to twitch and shake.

They may also let off little growls, quiet barks and gruff sounds, or little whimpers.

Stanley Coren, who I referenced earlier has this to say:

“It is really easy to determine when your dog is dreaming without resorting to brain surgery or electrical recordings. Just watch him from the time he starts to doze off. As the dog’s sleep becomes deeper his breathing will become more regular. After a period of about 20 minutes for an average-sized dog, his first dream should start. You will recognize the change because his breathing will become shallow and irregular.”

If you want to read more about doggy dreams, I recommend you get Stanley Coren’s book; Do Dogs Dream on Amazon. It’s a fascinating read and gives amazing insights into not just how your dog could be dreaming but also signs to look for to understand whether your dog is trying to tell you something.

How to tell if your Frenchie is having a bad dream

Of course, just like humans, dogs probably have bad dreams as well as good ones. Unfortunately, it’s quite hard to ascertain the differences though.

We can make a few assumptions though. For example, if your French Bulldog has been scared, anxious or distressed during the day, their dreams could be bad.

Signs to look out for would be crying, growling, or whining. If you see this, you might want to do your French Bulldog a favor and gently wake him up from his dream sleep.

Be careful though. A dog having a bad dream could take some time to wake up properly and might react badly with a bite if they are feeling threatened in their sleep.

Some people suggest letting dogs stay asleep when they are having a bad dream. I prefer to gently wake our Frenchie up though. It just seems like the right thing to do, but many owners will say different – “let sleeping dogs lie” springs to mind!

How do you know it’s not a seizure?

A dreaming dog and a dog having a seizure whilst sleeping can be quite similar. It’s important to understand what the differences are.

With a dreaming Frenchie you will typically see the leg paddling, kicking, and twitching only lasting for around 30 seconds. If your French Bulldog is having a seizure rather than a dream, the motions will be different.

A seizure during sleep will often be signalled by more rigid and violent stiff movements and a difference in how they breathe.

During a seizure, a sleeping French Bulldog’s breathing will be more labored. It’s almost like they are struggling to breathe and get air into their lungs. During REM sleep dreaming, the breath will be shallower and irregular.

During a sleep seizure, dogs can sometimes urinate and defecate. This won’t happen if they are dreaming.

Please don’t be too concerned though; dogs having sleep seizures is very rare.

Based on the scientific evidence I am a firm believer that French Bulldogs do dream. I think our own Frenchie probably dreams about his walks at the park, meeting other dogs, chasing cats, and playing with my son.

So, the next time you see your sleeping Frenchie’s legs start to paddle and his eyes start to twitch, there’s every chance he’s having an amazing dream!