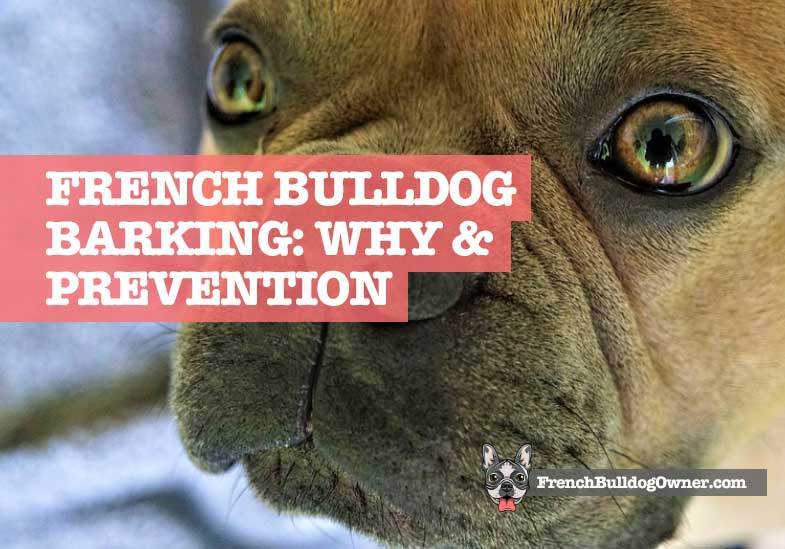 As a general rule of thumb, French Bulldogs aren’t big barkers. That makes them great dogs for people who live in apartments or those with kids who don’t want a dog that appears to be an aggressive breed.

However, all Frenchies are different and I’ve met some who do bark a lot and where it’s actually become a problem (even being described as a screaming sound).

In this guide to French Bulldog barking and problems, I’ve put together a list of reasons why your Frenchie could be barking too much, how to stop a Frenchie from barking, and also taken a survey of Frenchie owners. That should give you enough information to know what to expect.

To start with though, I want to answer a few of the most common questions about Frenchies and barking if you’re thinking about getting one.

Do French Bulldogs bark a lot?

French Bulldogs don’t bark a lot. Our own Frenchie will very rarely bark. The times he does will be when he thinks there is someone at the door as a protective instinct, but other than that he’s very quiet and communicates in different ways.

However, our friends Frenchie is a BIG barker. She will bark when left alone, at other dogs, and to get her owner’s attention.

To get a wider spread of opinion, I decided to run a poll survey in one of the largest Frenchie Facebook groups to see what other owners said about barking problems (I had 63 responses). The first question I asked was:

Does your French Bulldog bark a lot?

This answer is open to interpretation, as what some people think is a lot won’t be a lot to other owners. However, I did expand the question, telling people to only say yes or no if the barking was a problem. Here’s what people said.

The reasons why French Bulldogs don’t bark a lot is undoubtedly down to the way in which the have been bred. They have evolved to be companion dogs for humans, rather than a breed designed to be a guard dog.

I read an article in the New York Times that interviewed an owner who said this:

“They don’t bark. They have their own language of yodels, screams, chirps, warbles and what can best be described as snorfles.”

I don’t necessarily agree with that. Frenchies definitely don’t have a yap, and it’s more of a lower-pitched bark than what you would expect from a smaller breed. Here’s what it sounds like:

Why Do French Bulldogs bark?

Just like any other breed of dog, French Bulldogs will bark for a wide range of reasons. It’s a natural way for them to communicate with us but can be problematic if it starts happening regularly or for no obvious reason.

During my survey of owners a few common barking reasons came up time and again. In the main, barking was reported for the following reasons:

What do French Bulldogs bark at most?

Of the people who completed my survey and reported barking, I then asked them what their French Bulldog would bark at the most. Here are the most popular responses.

To look into this further, I then asked for specific examples, some of which I have listed below in a question and response format.

Do French Bulldogs bark for attention?

Yes, French Bulldogs can bark for attention. It can be their way of communicating to the owner that they either want something or there is a problem. Many times, they will simply bark for fun.

A Frenchie that constantly barks at everything and everyone could be signalling to you a health problem, anxiety, or a behavioural issue relating to territory or fear.

Some French Bulldogs will bark when left alone. Our friend has a younger Frenchie who has separation anxiety. The puppy will bark as soon as the owner leaves the house, and this has proved to be a problem with their neighbors.

If you have a Frenchie who barks when left alone then read this guide to separation anxiety. That has some tips on how to manage the barking problem with dogs who get left in the house for a few hours.

When I first put my survey out there to ask owners whether their French Bulldog barked a lot, I had loads of comments back from some who had a problem.

Here’s a list of the things reported back to me that would signal barking as a problematic behavior. It could help you if you worried about why your French Bulldog is barking a lot.

How to stop a French Bulldog barking

If you are suffering with any of the French Bulldog barking problems listed above, I would recommend that you try to ascertain whether it’s for health, behavioural, fear, or just fun reasons. If you believe your Frenchie is barking at you to signal a medical issue, then consult with your vet.

However, for any other reasons there are some things you can do to stop a French Bulldog from barking at new people, at everyone, when you leave the house, out of the windows, or for whatever reason it could be.

How do I get my French Bulldog to stop barking?

1. Quiet command with a reward

If your Frenchie is barking and you want them to stop, the first thing you can do to is to use a “quiet” command. This involves waiting for them to stop for a moment and then saying “quiet”, then “good boy”, then rewarding with a treat.

You can see how this method work with this infographic from the Dog Training Excellence website. Repetition is key to this training method.

You should always remain calm at all times. Dogs will react to human behavior and will often mirror us. That means if you shout at them to stop barking, they can then bark even more.

When you shout at a dog, they consider this as aggression and will either counter it back with increased barking or will retreat and become scared. A scared animal will be far harder to train to stop.

Many Frenchies will bark for attention. If you don’t give them what they want, they can be trained to stop the barking behavior.

Don’t talk to him, don’t look at him, and don’t touch or calm him. This can work very well with attention-seeking puppies where you only reward them once the barking has stopped completely.

This should help them to learn that when they stop barking they get rewarded.

4. Get him used to the triggers

You can also stop your French Bulldog from barking by getting them used to the triggers. For example, if it’s a certain person they always bark at, try to introduce them slowly and surely.

If it’s the doorbell they bark at, get them sensitized to it. You can do this by ringing your doorbell, giving the quiet command, and then offering a reward.

The key here is repetition, familiarity, and reward.

5. Keep your dog active and exercised

Some Frenchies will bark due to boredom and a lack of stimulation. Ask yourself whether you are exercising your Frenchie enough, or whether they have enough toys to keep them mentally active.

A tired dog usually leads to a good dog who won’t bark constantly.

Handy Hint: Here’s a list of the best toys that French Bulldogs love to play with.

And lastly, if you cannot get your Frenchie to stop barking at everything, it could be time to seek professional help.

Your vet will be the first port of call, and they will often recommend you talk to a dog trainer once any health issue has been ruled out.

What other owners say

As part of my research and survey I trawled social media to find instances of Frenchie owners who had reported problematic barking. Here is some of the best advice I found that people suggested to help train your French Bulldog to stop barking.

“Socializing Frenchies is very important when they are young. We took are pup everywhere we could and let people pet her and hold her, we introduced her to other dogs as much as possible. Our Frenchie rarely barks now and only when she wants attention or up on the couch or bed.”

“As soon as your Frenchie begins to bark, have super good treats available. Not a regular treat but the best treat ever! Call her to you and begin feeding nonstop treats. Literally just keep popping treats into her mouth. As soon as the person is out of view, stop the treats. Soon, when she sees a person, she won’t be barking at them, she will look to you for her mega special treat. Strangers will be her best friend.”

“Pet stores sell a device that makes a sound like a dog whistle that humans can’t hear and when the dog barks it sends the sound and they immediately get quiet. It’s about $30 and you won’t be hurting or punishing your pup for being who they are.”

“You may want to buy another dog or adopt, mine used to do the same thing until I got a second dog, he still does it every now and then but is very rare. Frenchies are definitely better in pairs. Think about it nobody wants to be alone and two is better than one.”

“French Bulldogs will sometimes bark in excitement or if the doorbell goes. But they are not a consistent barking dog, although we did have one! The only thing I’ve found to work was a spray bottle. I had a trainer come to the house she suggested spraying them from behind, so they don’t see you. It’s supposed to scare them and stop the barking behavior.”

In the main, French Bulldogs don’t bark a lot. If it’s quiet dog you’re after, they will be a great choice.

However, that doesn’t mean you won’t have one that barks at people, other dogs, doorbells, cars, and everything else in sight – although it is relatively rare as I established with my survey.

If your Frenchie does have problem barking, try to establish the root cause and work to train the reaction out of them.

This breed is relatively easy to train, and in most cases,  you should be able to get your French Bulldog to stop barking with patience and a little hard work.

Here are some other training guides and helpful hints I’ve published.

I am one of Claude the French Bulldog's human parents. I write about all the things I've learned about owning a Frenchie, the adventures we have, and any advice and tips I've picked up along the way. Read more about Marc Aaron.

link to Are French Bulldogs Good Off the Leash? (Train to Walk Without a Leash)

Frenchies are renowned for their stubborn behaviour, so it’s only natural to question how good they are off the leash. There’s also the consideration of whether you can teach them to walk without...

French Bulldogs don’t need as much exercise as the majority of breeds, but they do still need to be kept active. Our Frenchie Claude loves getting out and about, so we go for walks twice a day....