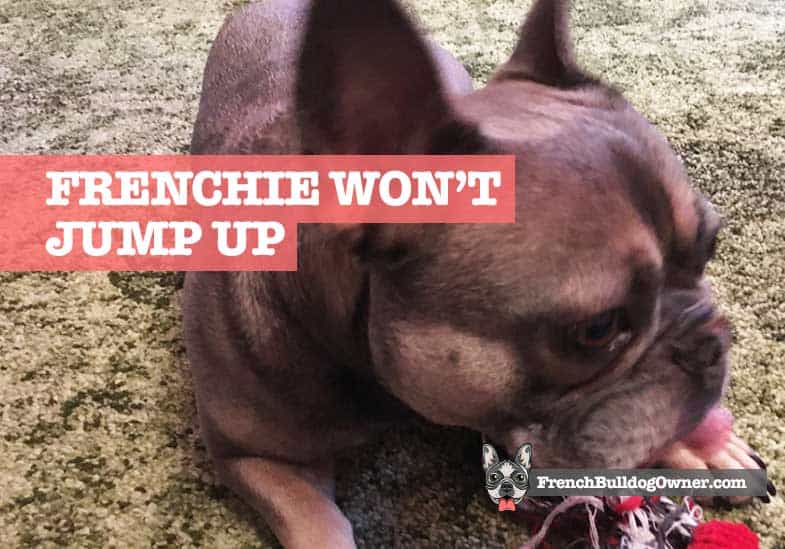 If you’re a regular watcher of our Frenchie YouTube channel, you will know how we spent our Christmas taking Claude to the vet a few times. The reason we had to go back was because he had stopped jumping up. Claude loves jumping up, and for him not to jump on our couch, bed, or for treats was quite worrying.

We first noticed it happening on December the 23rd when we were sat in our lounge watching TV. Claude normally comes in and jumps up to sit between us. Instead he just sat on the rug looking at us sadly.

If your French Bulldog won’t jump up, I have a possible reason for it, based on what we learned over winter.

Why our Frenchie stopped jumping up

Because he wasn’t jumping up on the couch as usual, I went to pick him up, and this is where I knew something was immediately wrong. Claude let up a yelp and went to bite me.

Claude has never bitten anyone before, so it was clear he has some sort of issue. This breed can pull their back muscles and suffer with back problems. But weirdly it didn’t seem to be the top of his back that was hurting him…

It happened when I picked him up with one hand underneath his rib cage (see how to pick a Frenchie up in the video below).

More trouble trying to climb up the stairs

Later that day we went upstairs which is normally Claude’s cue to follow us up. He finds climbing stairs very easy, so this was another big signal that something was wrong. I went to pick him up again and the yelping and whinging started again.

It was time to take him to the vet.

What the vet said and did

Our vet checked Claude over completely. She did this by pressing on his back lightly, pulling at his arms, and seeing if he was in any discomfort.

He didn’t react in anyway, which made the not jumping up and yelping issue even weirder.

She decided to do some tests with a treat, where she held a treat over his nose, and moved it back, forward and from side to side to see what reaction she would get from him.

What she soon found was that he was finding it hard to look up, but down wasn’t a problem. Her diagnosis was that it was a classic case of French Bulldog pulled back muscles.

This made perfect sense, because on the way to the vet appointment he had no problem in walking down some steps downwards my car but could not climb steps. Down was no problem, up was a big problem.

She prescribed Claude some special dog pain killers and sent us on our way. We were under strict instructions to not exercise him at all and keep his movement to a minimum.

Other reasons for not jumping up

Before I explain how it went for us, I wanted to share some other reasons our vet said a French Bulldog won’t jump up. She went through a range of possibilities before ending up with the pulled back muscle diagnosis.

She did actually believe he had a small infection, so did express them in front of me (not a nice thing to see – watch video below).

2. Major or minor back trauma

French Bulldogs are extremely prone to back problems (here’s what else they can suffer with) so if they won’t jump up, it most likely going to be a back issue.

We initially thought Claude wasn’t jumping up on the couch due to a possible back strain or jarred bone.

Our vet said that if our Frenchie started walking funny like he was drunk, for us to come in immediately as that would be a sign of a spinal problem – which would be extremely serious.

Other possibilities could have included either a herniated disc or strain.

Claude showed no sign of a leg injury, but this is another reason why Frenchies will stop jumping up on beds and couches. I’ve written more about what to look for when your dog has a limping back leg elsewhere on the website.

What happened after the vets…

The first week or not being able to jump up

We followed the vet’s advice and didn’t walk Claude at all, giving him one pain killer a day and seeing how he got on.

For the first week, he would not jump up on our couch, bed, or climb stairs at all. However, he was quite happy to go downstairs with no problem.

After about 8 days, we felt that his pulled muscle was probably recovered based on how he was behaving around the house. It was time for a lead walk at the park… I wanted to keep him on his lead to avoid any over-exertion.

He seemed himself, so I decided that the next day I would be letting him off the lead and monitoring how he got on.

The second week of not jumping up on the couch

By week two, Claude appeared to be fully recovered. He was back to his old self in the way he wanted to play, running at the park with his doggy friends, and his usual exercise routine.

However, our French Bulldog would still not jump up, despite appearing to be fully recovered?

What was going on?

It was time to go to the vet again and see what she thought.

Our vet did the treat test again, and he was able to look up this time. So we knew that his pulled muscle was completely fine. So, why was our Frenchie not jumping up anymore?

The vet had a simple explanation…

Because Claude now associated jumping up and climbing upstairs with a painful reaction, his muscle memory was stopping him from doing it. He simply thought it was going to hurt him.

We were going to have to re-train Claude on how to climb upstairs and how to jump up on the couch and bed again. We’d also have to show him how to climb through the dog flap in our back door, as he’d stopped doing that as well!

Re-training our Frenchie to jump up on the couch

If you’ve read my guide on how to stop a Frenchie from jumping up at you, you will know how reward and repetition works really well with training.

Whilst I trained Claude not to jump up at us and other people, I wanted him to get back to his old self with okay behaviours – we don’t mind him jumping up on our couch and are fine if he wants to walk upstairs in our house.

Frenchies can jump as high as 40 centimetres off the ground so there was no reason now why he shouldn’t be able to jump up on the couch.

With a mix of treats left on the couch, and me lifting him up and down, he soon got back into the swing of things until he could do it all by himself.

The stairs needed a little more work, so I placed treats on every third step, and then lifted him onto the first step myself. After a few attempts he learned that jumping up was no longer problematic for him – and he’s now back to his old self!

If your Frenchie won’t jump up on the bed or couch anymore, or has problems climbing stairs then go to your vets immediately. Whilst Claude’s issue was relatively minor and easy to heal, it caused him a lot of pain, and a lot of worry for us.

Your vet will be able to manipulate your Frenchie’s back and legs and should be able to diagnose any problem quickly.