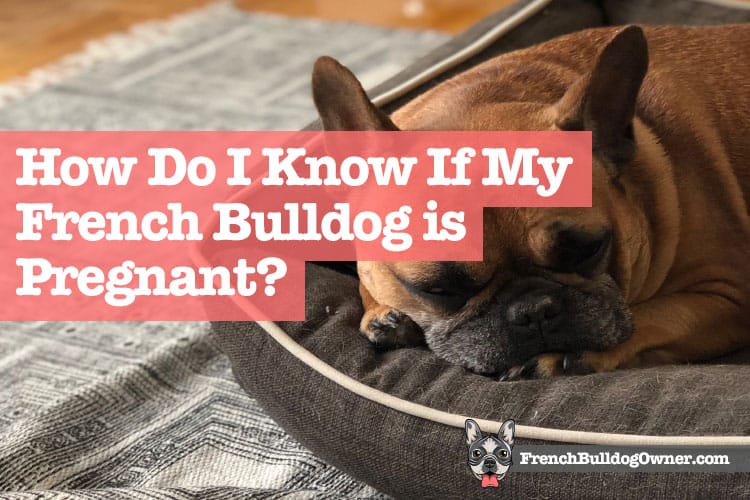 It’s not easy to tell if your French Bulldog is pregnant, but there are some early signs you can look out for. I’m not a breeder myself but do stay in close contact with our own dog’s breeder who is an expert at this type of question.

I asked the breeder how you can tell if a French Bulldog is pregnant- here’s the advice he gave me over email, starting off with some early signs of gestation. I also spoke to a vet who supplied details on each stage of the Frenchie pregnancy which you can see lower down the page.

What are the early signs if your French Bulldog is pregnant?

Those are some quick and easy ways to discover whether your Frenchie is expecting puppies. Now let’s get into the more scientific methods which will leave you in no doubt if she is pregnant or not – it will also include a few things you need to know about a Frenchie ultrasound.

How to tell if a French Bulldog is pregnant

To find out if your French Bulldog dog is pregnant, there are two methods which will let you know for certain.

The quickest way to find out if conception and mating has worked is to pay for a French Bulldog ultrasound scan at your vets. This should be performed 21 days after the date of the last mating encounter.

Whilst an ultrasound procedure is painless for your dog, the examination can be a little stressful because it will often be necessary to shave her belly fur away.

The noise of the shaving can sometimes worry a dog, so make sure you’re there to comfort her and keep her as calm as possible.

Did You Know? You can expect to pay anywhere between $300 to $500 dollars for a dog ultrasound (£230 to £380 GBP), which typically includes the consultation fee as well.

Blood sample at 5 weeks after mating

If the mating event was 5 weeks ago or more, then you can detect the pregnancy hormone using a blood test. This will be cheaper than an ultrasound but be aware that an early pregnancy can difficult to date.

If your French Bulldog has been pregnant for less than 5 weeks, the result of this blood test can be negative even if she is indeed pregnant.

The most reliable method for French Bulldog pregnancy testing is the ultrasound after 25 days. It is the most accurate way you can test for pregnancy and will give you a quick and clear answer.

Another benefit to an ultrasound is that you can see the puppies on the screen, just like you would be able to when going for a pregnancy exam as a human – it’s an amazing thing to see and will give you an idea of how many puppies she is expecting!

An ultrasound might not always give you an exact number of puppies. This is because with larger litters it is difficult to count the puppies clearly as some will overlap and one puppy can hide another.

Did You Know? French Bulldogs will on average have 3 puppies in a litter. See how this compares with other dog breeds in this guide to litter sizes.

After 45 days you can request an X-ray. This will let you see exactly how many puppies your Frenchie is expecting. The X-ray will also help to determine how large the puppy skulls are so you can decide whether a natural birth is possible or not.

But what about the actual stages of pregnancy for your Frenchie, and what can you expect? Well, I chatted to a vet, and they gave me this excellent overview of what’s you can look out for at each stage of the pregnancy.

The first month of your Frenchie’s pregnancy won’t always be that obvious; after all, it’s quite hard to tell unless you have had an ultrasound.

On the 7th day of pregnancy, the little Frenchie embryos will travel to the uterine horns. After 2 weeks, typically on the 16th day, the embryos will embed themselves into the lining of the uterus.

Moving through the first month stages, by the 22nd day, the tiny fetus will start to take shape. About 7 days after this, your vet should be able to detect their heart beat with an ultrasound procedure.

A French Bulldog 3 weeks pregnant can also show some physical and behavioral changes including:

But please be aware, not all pregnant Frenchies will show any of these signs. In the first 3 weeks of pregnancy it can be very hard to detect.

Handy Hint: Did you know that French Bulldogs can have false pregnancies? It’s a common thing with dogs, and something I explain in my Frenchie false pregnancy guide.

Things are now progressing very quickly, with the fetuses really starting to take form with eyelids and toes appearing between days 32 and 35.

By the 40th day, the little Frenchie fetuses will now have claws, and then 5 days after that, their skeleton and coat will start to form.

On day 50, your vet can also now perform an X-ray which will let him see how many puppies are going to be born… it’s an exciting moment when you can find out the size of the litter!

Around day 58, you can expect your pregnant Frenchie start looking for a place to nest. You can help her with this, by creating a safe and comfortable area in your home.

Whilst the signs of pregnancy in the first stage aren’t always obvious, during the second French Bulldog pregnancy stage, you can’t really miss them. Here’s are the signs you will start to see:

The most exciting French Bulldog pregnancy stage is the third and final month. By the start of the month, she will be to give birth, and the little puppies will be getting into position to arrive.

By day 58, the Frenchie puppies will almost be completely formed and developed, so they move into the birth canal for the last few days of pregnancy.

The signs during this stage you will start to see include:

Your Frenchie will be pregnant for between 58 and 68 days. The average pregnancy length is typically 63 days from conception to birth. You can read more about this in this supporting article.

You will notice the most physical changes in your the dog in the last two weeks of pregnancy, but it is possible to see some changes quite early on including:

At the end of the gestation period you might notice signs such as:

How you can prepare for a French Bulldog pregnancy

On your side, there are a few things that you need to put in place to prepare for the birth.

How French Bulldogs give birth

The most common way that a Frenchie will give birth is by a caesarean section. It’s rare for them to give birth naturally, but here’s an overview of both aspects.

This technique is the most common for French bulldogs. It’s because the size of the puppy skull can make a natural birth complicated or dangerous.

Talk to your vet at the time of the pregnancy screening to assess the best option as the X-ray. This will provide a scan of the puppy skeletons and will be the decider on whether to go down the C-section or natural birth route.

Handy Hint: If you are based in the United States, please read this guide to French Bulldog Cesarean sections. It includes average prices, how to prepare, what to expect, and reasons why Frenchies need C-sections over 80% of the time.

If you decide to let things happen naturally, be prepared to see the warning signs that your Frenchie is ready to give birth.

If the time has come for your dog to give birth, you will need to prepare her “nest” a few hours before.

You might see signs that she is ready to give birth including her going to the spot several times, returning back and forth to the area, scraping the towels several times, and then finally settling down and panting like she’s just run a marathon.

Her condition is not going to calm down, and her breathing and heart rate will continue to increase. It can take between 2 and 12 hours before the first puppy starts to show.

If after 10 hours, no puppy has been delivered it could be that her birth canal passage is blocked. This can be very dangerous and will result in you needing to choose an emergency caesarean procedure.

Once the first puppy has arrived, your Frenchie will tear the sack that includes the puppy and lick it quickly to clear his breathing. If she does not do this herself it will be up to you to help her to do it.

Don’t be surprised to see your Frenchie eating the sack as well as the umbilical cords. They contain nutrition as this is completely natural and an in-built instinct.

Once the puppy is out and active, you can place it onto the mother’s teats and they should be start feeding immediately after their release.

As mentioned above, if you do choose the natural birth method, be aware that this could result in the need for an emergency C-section. Prepare for this eventuality as soon as you find out your French bulldog is pregnant and budget accordingly.

Handy Hint: I developed a French Bulldog gestation calculator. Simply type in the conception date and it will give you an estimated due date for the puppies to arrive.

Knowing when your French Bulldog is pregnant is essential, because you need to prepare for the birth.

Personally, I would always recommend the C-section route versus a natural birth. It’s not unheard of for both the puppies and mother to either be injured, or in worst cases die during a natural birth.

If your Frenchie is pregnant, I wish you all the best with the birth and would love to see some photos of the puppies once they arrive!