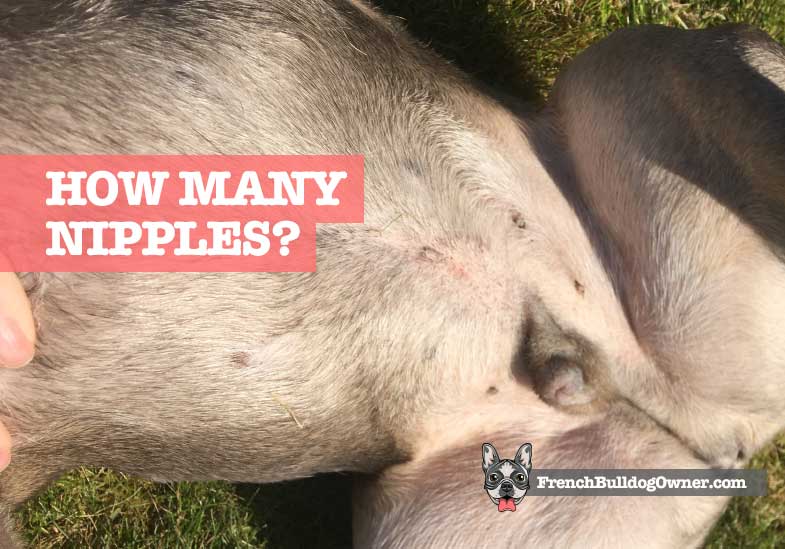 I watched a video this week where I guy discovered his female French Bulldog had 9 nipples. The video had me in stitches, and actually resulted my son and I making our own video to show how many nipples a Frenchie has, We tried (badly) to count the ones on our own dog.

You can see our video where the counted our French Bulldog’s nipples a little further down the page. But before that, if you want to know how many teats your Frenchie should have, here’s the short answer, followed by more detail on male and female differences.

How many nipples does a French Bulldog have? Most French Bulldogs will have 8 nipples, whether they are male or female. Some larger dogs can have 10 or 12 nipples. Most will have an equal number on each side of their body; however, some Frenchie’s can have an odd number of nipples.

If your Frenchie has more or less than 8 nipples, please don’t be concerned. Dog nipples can range in number from as little as 6 to as many as 12. Most of the time it depends on the breed of dog and how large they are.

But sometimes dogs can have an odd number of nipples. Whilst rare, it’s nothing to worry about. The reason that some dogs have uneven nipple numbers is not actually known.

Here’s that video from the French Bulldog Owner YouTube channel where we tried to count our Frenchie’s number of nipples.

Male and female Frenchie nipples can look similar, but the females will tend to be bigger on average, particularly if she has had a pregnancy or is looking after her young. After delivering a litter, the nipples won’t always return back to the same size they were before but should certainly get smaller.

Dogs can also have phantom pregnancies where their nipples can become larger. I wrote a separate guide about why your Frenchie’s nipples have got bigger, with other reasons for enlarged teats too.

Most female Frenchie’s will have 6 to 10 nipples, with 8 being the average. 12 nipples are found on larger dog breeds, so any number that’s even is normal. As discussed though, some dogs can have odd numbed nipples, which is nothing to be worried about.

Her nipples will appear in two symmetrical chains running from her lower belly all the way up to her chest by her front arm pits.

If you see red or purple nipples, this could be the sign of a health issue.

Do male Frenchies have nipples?

French Bulldog (male) nipples tend to be smaller and can be hard to spot; but there are definitely there. The reason male Frenchies also have nipples is due to the way the foetuses develop in the mother’s womb.

In the first few weeks, both the male and female embryos follow the same developmental path, including growing nipples. It’s after this point that the embryo becomes male, but the nipples will remain, albeit being smaller and not functioning as they would in females. In simple terms; no, your male Frenchie cannot and will not be able to lactate and produce milk!

Another thing to note is how as an adult, your male French Bulldog’s nipples will be small and round bumps that can often be hidden under the fur and hard to detect.

Counting how many nipples your Frenchie has

If you watched our YouTube video higher up the page you will know how tough it can be to count your dog’s nipples properly – particularly with males who have smaller teats.

With female Frenchies, counting will be a lot easier, but no so much with males. Whilst dogs with short coats make things easier, a male Frenchie’s nipples are still so small that you will need to feel around for some of them.

You will find plenty of videos online where dog owners have found nipples in weird places. On their dog, not themselves! One of the more common areas to find a random nipple is in your dog’s armpit or just at the top of one of their legs.

I asked my vet why this might be, because it’s not unheard of for a female French Bulldog to have a nipple in an odd place. Here’s what our vet said:

“Most nipples on the dog will develop inside the womb in symmetrical lines running from their arms to their paws. But sometimes things can go astray! If you do find an odd nipple on your Frenchie, check to see if there’s a matching one on the other side of the body. If not, it’s always best to give us a call to check it out in case it’s a lump and not a nipple.”

Is it a nipple, a tick, or a belly button?

When Claude was about 8 months old, we were looking at his belly and thought one of his nipples was a tick. It’s because it was a darker nipple than the others and more noticeable. As we walk him in the forest daily, we momentarily thought it was a tick.

After a little bit of feeling around though, we found another nipple in the same place symmetrically on the other side of his body.

Don’t squeeze it, poke it, or try pull it off… chances are it’s a nipple and not a tick!

People can also mistake their dog’s belly buttons for a nipple. This is easier to spot though, as it will be in the middle of the belly, near the bottom, and typically set between two nipples. So no, it’s not 3 nipples in row!

Whilst most French Bulldogs will have 8 nipples, less or more isn’t unusual. Even an odd number of nipples is not something you should be concerned of. It’s simply a quirk of nature with dogs all over the world.

However, do keep an eye on your Frenchie’s nipples. If one seems larger than the other, has gone a strange color, or has discharge, scabbing, or itchiness, please always consult with your vet.

Over the last couple of years my son and I have produced lots of fun videos and supporting blog posts with interesting facts and observations about Frenchies. Here are some of our favourites: