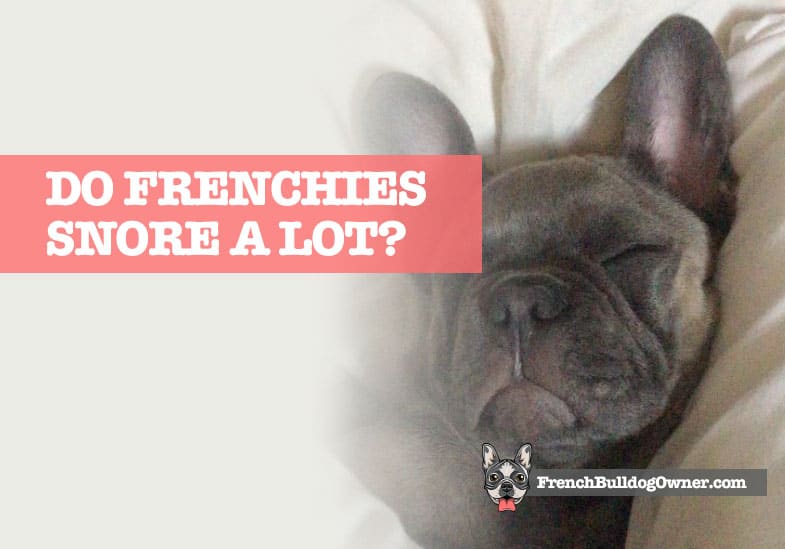 When we first got Claude, I wasn’t really aware of how much snorting and snoring Frenchies were capable of. That soon changed after a few nights of him sleeping in our bedroom. So, if you’re here to find out whether French Bulldog snore, and whether it’s a lot, I am going to give you a real owner’s experience…

That’s the short answer. If you’re after a dog who won’t interrupt you watching your favorite TV shows or who will let you get a good night’s sleep, a snoring Frenchie probably isn’t for you!

Why do French Bulldogs snore?

There’s a good reason why French Bulldogs snore a lot and why it’s so loud and bad. They are of a brachycephalic breed. In simple terms this means they have a flat face (often called smushed or smashed in).

Snoring is one of the most common traits of dogs with snub-noses and flat faces. It means that Frenchies have not just flat faces, but also narrow nostrils. As a result, it’s hard for air to move freely in an un-restricted manner.

To get an expert opinion, I found a blog post by Doctor Brendan McKiernan of the University of Illinois Veterinary Teaching Hospital. This is what he had this to say (view source).

“Brachycephalic dogs typically have enlarged soft palates, overly narrowed nostrils, and everted laryngeal saccules, meaning that tissue in the airway is pulled into and obstructs the airway. Problems also occur when tissues become swollen and when repeated small injuries to tissue go without treatment. In addition, thin scrolls of bone in the nasal cavity called turbinates may grow abnormally in these breeds, causing further obstruction of the airway.”

I won’t get into the ethical considerations of brachycephalic dogs and their breeding, that’s for another time (I’ve listed the health issues Frenchie owners should be concerned about elsewhere). However, if you’re getting a French Bulldog, snoring is something you will have to get used to.

Do all French Bulldogs snore?

All French Bulldogs will snore. The only exception to this would be if the Frenchie has had surgery to widen their nostrils (stenotic nares). This is a procedure that surgically corrects noisy breathing and snoring.

I’ve never met a French Bulldog who doesn’t snore or snort, unless of course they have had this surgical procedure. It is normal for French Bulldogs to snore. However, there can be times when you need to take it more seriously which I will talk about lower down the page.

Why do French Bulldogs snore so loud?

French Bulldogs snore so loud due to their brachycephalic nature. I’ve gone into this in a little detail already, but it’s worth mentioning that they don’t always snore when they are asleep.

It’s not just their sleep patterns (and yours) that can be disturbed by snoring and snorting. They can also snort when awake. Your Frenchie could also exhibit snorting after excessive exercise as the nostril passages can become enlarged.

In the coming months I will be recording Claude’s snores to find out how loud French Bulldogs snore. I recently saw a video on YouTube where a pug was snoring at 96 decibels, so I will see if a Frenchie’s snore is louder than that.

In the next section I am going to talk more about French Bulldogs snorting when asleep, how bad they snore, if they snore when happy and awake, plus when you might need to talk to your vet.

French Bulldog snorting and snoring: when to worry

We have affectionately named Claude’s snores and snorts the “snortles”. It’s the best way in which we can describe them!

Snoring whilst awake is quite common in French Bulldogs. However, it’s not something that should be happening all of the time.

Is it normal for French Bulldogs to snort?

Yes, it is normal for Frenchies to snort and snore.

Snorting and snoring isn’t always due to the brachycephaly. It can also be due to an obstruction in their airways, and allergic reaction, the position they are sleeping in, their genetics, or another health issue altogether.

Why French Bulldogs snort and snore so much

Let’s look at all those snorting and snoring reasons in a bit more detail and when you might need to call the vets.

My French Bulldog is snoring while awake

If your Frenchie is snorting all the time when awake, and not just after some exercise, it could be the sign of something more serious. You can see what those reasons could be in the previous section.

Do French Bulldogs snort when happy?

As owners, we have never noticed Claude snoring or snorting when happy. That’s not to say it doesn’t happen, just our personal experience so I wouldn’t say it was an indicator of happiness.

Handy Hint: Did you know there are certain signs your Frenchie is happy. I’ve listed them all in this guide to Frenchie happiness.

How to reduce your Frenchie’s snoring

I’ve previously written a guide on how to stop your French Bulldog from snoring which you can read elsewhere on the blog. Here are a few tips without the larger detail to get you started though.

French Bulldog snort all the time! They are also massive snorers! Snorting and snoring is perfectly normal, and MOST of the time is nothing to be concerned about.

With Claude it’s part of his unique personality. He sleeps on our bed at night for a few hours before lights off time whilst we watch TV.

I would estimate we probably have to shift him around a couple of times. Getting him into a different position will usually give us some respite for 30 minutes before it all starts up again!

However, if you do have any concerns and the snoring seems to be louder or more frequent than usual, especially if it’s happening a lot when your Frenchie is awake, you might just want to check in with your vet.