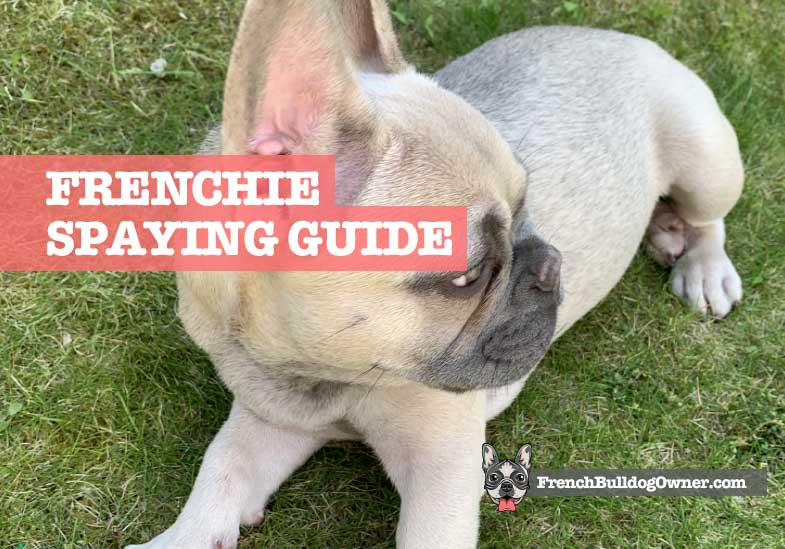 This guide contains all you should ever need to know about getting your female French Bulldog spayed. It includes details on when you should get it done, how much you should pay, the pros, cons, plus what the surgery involves including any possible complications.

And just to confirm, neutering is for male dogs, spaying is for female. With that in mind, this guide is purely focussed on the female side of the surgery. You can find a guide to neutering elsewhere on the website.

How the procedure works

French bulldog spay surgery is a relatively simple and straight forward procedure that is performed thousands of times a day around the country. Most vet can perform a spay surgery, but there are different methods that are used.

In the United States, most dogs are spayed via a ovariohysterectomy procedure. This is where both the ovaries and the uterus are removed.

Before the surgery, your Frenchie will be given a medication shot to get her relaxed and to help with the pain. She will then be placed under a general anaesthetic and will feel nothing during the surgery. She will also have a breathing tube placed down her throat.

During surgery she will be placed on a heated mat whilst her heart rate and oxygen levels are monitored for the entirety of the procedure.

The vet will cut a small incision just below her belly button. Your Frenchie’s ovaries, reproductive tract, and uterus are then removed through the abdomen.

The incision will then be closed up. Vets will use two layers of dissolvable stitching under the belly skin. Your dog’s outer belly skin will be closed together with glue, staples, or stitches.

The alternative spay surgery is called an ovariectomy. In this procedure, it’s just the ovaries that are removed, with the uterus remaining in your Frenchie’s belly. If you are given the choice between the two different surgeries, I would recommend the first option I described; an ovariohysterectomy.

The reason I recommend this, is because by removing the uterus, you can reduce the risk of any future diseases to the uterus or complication.

Some vets will also offer a keyhole surgery alternative to both procedures. This is more expensive than a standard spay surgery, but will lead to faster recovery, less pain, and less scarring.

How long does spay surgery take?

French Bulldog spay surgery should last between 20 minutes to an hour and a half. It can be longer though; it depends on how old your Frenchie is, how big she is, and whether she is in heat at the time of the surgery.

You can read this guide to find out the signs of heat in a Frenchie. The reason heat cycle has an impact on surgery time is because there will be more blood, and the reproductive tracts can be more fragile so need extra care being taken. If your Frenchie is in heat, I would postpone the decision to go ahead. As well as the complications described, it can also have an impact on cost.

What is the recovery time?

Some Frenchies will be able to get up and walk as quickly as 30 minutes after a spay surgery. But they will need far longer than that to recover.

Vets recommend that French Bulldogs are given 14 days to recover from a spay surgery. During this time, they should avoid any jumping, over-exertion, and might need to wear a cone on their head.

During the recovery period, there are certain things you will need to do to help avoid any complications and risks.

Will a scar be left?

Yes, there will be a small scar left afterwards, but in most cases, you won’t even be able to see it once hair grows back.

French Bulldog spay scars can differ in size, depending on how well the stitching was done.

Can there be any complications?

Any type of surgery comes with complications, and Frenchies are actually more prone to risk due to their brachycephalic nature. The age of the dog can also play a factor.

However, despite complications being extremely rare, you should still talk with your vet if you have any reason to be concerned about your Frenchie’s health before surgery.

French Bulldogs are in a higher risk category for any form of surgical procedure though. Some specialists even recommend vets use advise a breed-specific anaesthetic. You can read more about this on Vet4Bulldog.com.

The reason for this is down to possible brachycephalic syndrome complications. Dr Kraemer of the Vet 4 Bulldog website cites the following risks:

The bottom line is this; there is always a risk when a dog goes under anaesthetic. Make sure your vet gives your female Frenchie a thorough health check before spay surgery to avoid any complications.

And what about after the operation?

The younger the dog, the less potential complications there are with after spay surgery. But conversely, where younger dogs are more active, they can be more at risk of complications post the procedure.

All of these possible complications can be made worse if your Frenchies tries to scratch and bite at the stitches or is too active in the 2 weeks post procedure.

Spaying costs will vary dramatically depending on where you live, and also how big your dog is. Based on that, it’s not that easy to give a hard and fast rule on spay surgery costs, so I’ve come up with some averages below.

How much does it cost to spay a French bulldog in the UK? French Bulldog spay surgery costs around £170 on average. If you choose the more expensive keyhole spaying (laparoscopic ovariectomy) then you can expect to pay £350 on average.

How much is it to spay a French bulldog in the United States? It costs between $135 and $300 dollars to have a Frenchie spayed in North America. Just like the UK, prices will vary depending on geographic location and whether you opt for a keyhole procedure.

If you don’t have the funds to pay for spay surgery and are put off by the relatively high costs for what is a simple procedure, then you can get assistance.

For example, in the United States, companies such as PetSmart and Petco and your local vets can give you access to discounts and vouchers. Here’s some text taken from a vet website in Centre County to give you an example:

“Our spay voucher program is designed to reduce the cost of getting your dog altered. The program gives you a coupon that can be used at a local vet’s office at the time of surgery. Our voucher program is open to people who live full-time in Centre County. Vouchers are also available for purchase for cats only to people who live outside of Centre County.”

I would ask your local vet or do a quick Google search to see if there is an equivalent scheme where you live – it’s a great way to help reduce the cost of getting your Frenchie spayed.

Should you spay your French Bulldog?

Whilst it’s not that easy for Frenchies to conceive without help from their owners, it can still happen. Male dogs can sniff out a female on heat from very long distances, so that walk at the park with an un-spayed Frenchie could result in some unwanted puppies!

Spaying is also going to benefit your Frenchie’s health as it can help to prevent certain cancers including ovarian cancer, uterine cancer, and even doggy breast tumors.

Some owners also say that after spaying, their female Frenchie became a lot easier to handle and wasn’t as high maintenance. I cannot find any research to back this up, but it’s definitely a recurring theme with many people I’ve spoken to.

Handy Hint: Read more reasons to spay your Frenchie in this short guide to age recommendations and the positives.

Will spaying my French bulldog calm her down?

There are good reasons why people say spaying can have a calming influence on a Frenchie. For example, if they are no longer in heat, they won’t have the desire to roam, hunting for a mate.

There could also be a loss of aggression. Some owners I spoke to say their un-spayed Frenchie would fight more to get the attention of male dogs, but after spaying was a lot calmer and less aggressive.

When should you spay a French Bulldog?

The decision to spay your Frenchie should come at a relatively early age. It’s much safer spaying a younger dog than an older one. With that in mind…

At what age should you spay your French Bulldog? Your female Frenchie should ideally be spayed between the ages of 4 and 6 months. Early spaying can reduce the risk of uterus infections, cancers, and pregnancy. Vets recommend spaying surgery before a Frenchie’s first heat cycle which typically occurs between 5 and 10 months of age.

The pros and cons to spay surgery

You will hear a lot of misinformation about how spaying a Frenchie can have a positive impact on their personality and temperament. Some people also say that spaying can result in weight gain and inactivity.

However, as at the time of publishing this guide, there is no scientific evidence that I can find to back up any of these claims.

But there are still some pros and cons to spaying (otherwise people wouldn’t do it), and here are what I believe they are.

Unless you have plans for breeding your Frenchie (and I really don’t recommend you do) please seriously consider getting your female spayed as soon as she reaches the right age. It has various health benefits, means you don’t have to deal with heat problems, and (according to owners) leads to a better behaved dog.

Despite the risks and complications I’ve listed, it’s actually one of the safest dog surgeries there is. In fact, I found some research online which stated the following:

As you can see, getting your French Bulldog spayed “should” come with little to no risk, with the pros far outweighing the cons.