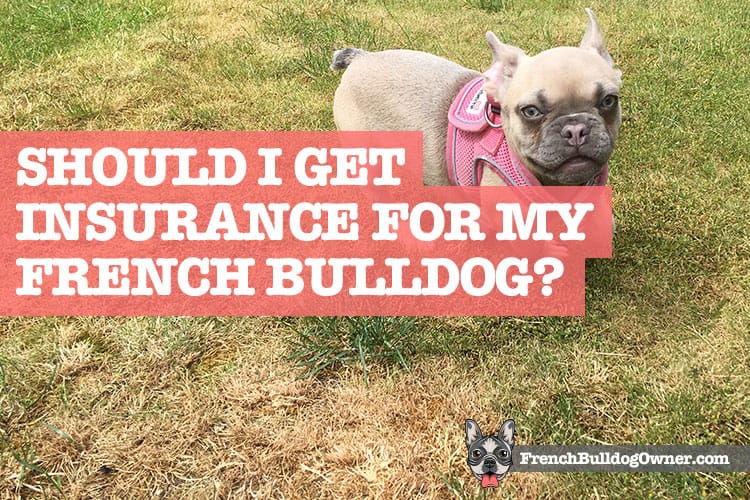 As an owner of a French Bulldog, I’m all too aware of the health implications they can come with. This will have a big implication for the type of pet insurance that you buy as an owner. So should you buy pet insurance for your own Frenchie, is it worth it, and how much will it cost? Here are my answers:

Should I get pet insurance for my French Bulldog? You should always get your French bulldog insured. They are one of the most expensive dog breeds to buy and are the third most stolen dog breed in the UK. They also come with health problems which many pet insurance policies will help offset veterinary costs against.

Is pet insurance worth it for a French Bulldog?

As a Frenchie owner, I am perfectly placed to explain why pet insurance is worth it for a French Bulldog. Over the last 6 months we’ve had to go to the vets 3 or 4 times with our own boy Claude. He keeps hurting his back which had led to check-ups, painkillers, and some x-rays being performed to get to the bottom of his pain. If we didn’t have pet insurance, we could be nearly £700 (around $1,000) out of pocket…

As we’re paying around £400 ($550) a year in pet insurance, it’s very worth it for us. We anticipate we will have more bills this year, so the insurance more than pays for itself.

French bulldogs are expensive. You could be paying up between £650 and £3,000 for a puppy so why wouldn’t you insure that cost?

You wouldn’t spend that much money on a car and then not have it insured, so don’t take the risk with what in effect is one of your family members.

By having adequate pet insurance in place for your Frenchie you can guard against vet bills and theft.

Yes, you heard that right, theft.

According to a study by Direct Line, they are the third most stolen dog breed in the UK. In fact, in 2017 the thefts of Frenchies increased by 27% on the previous year.

If you have the right type of insurance cover for your Frenchie, you can help to pay for a variety of items should he get stolen. That policy could include coverage for:

And what about their health?

It’s widely documented that French Bulldogs come with a range of health problems due to the way in which they have been bred as a brachycephalic dog with a short head and snout.

What this means is that they are more susceptible than other dog breeds for health conditions such as:

It’s a sad fact of life that these loveable and good-natured dogs are deliberately bred in a way that products structural deformities resulting in health problems.

Did you know? A recent study listed the most common health issues faced by Frenchies and how prevalent they are in the breed. To see what those health problems are and what symptoms to look out for, read this guide.

And did I mention that they are accident prone?

If yours is anything like mine, then he is bound to be a bit of clown. That’s all part of their lovability and character.

But this part of their nature also means they can be accident prone.

When my Frenchie was a puppy he took a lot longer to train compared to other breeds and it’s only now that he’s two years old that he recalls properly.

For the first year and a half of his life he would run from me with no understanding of danger. I lost count of the amount of times he bolted from the front door and ran into the road.

Luckily nothing bad ever happened, but he had a few close scrapes with cars where things could have been a lot worse.

I do have pet insurance for my French Bulldog, but thankfully I have never had to use it due to an accident, but there were some very close calls.

What’s the best pet insurance for a French Bulldog?

For this breed, it’s important to find a pet insurer that offers theft coverage as part of the standard policy, and one that gives lifetime coverage against the dog’s health.

How much is French Bulldog insurance?

Insuring a French Bulldog is essential, and you would mad not to do it based on what we know about this particular breed.

I would advise that you take out what’s called a lifetime insurance policy, as this will mean your Frenchie is covered for his entire life.

You could be looking at spending between £30 and £35 per month, with those costs coming down slightly if you decide to pay for 12 months upfront.

Annual insurance costs for a French Bulldog could therefore come in at between £350 and £400 pounds each year.

Based on that level of cover, you could get as much as £15,000 pounds worth of vet fees paid for each year.

What you will find when requesting pet insurance quotes is that the insurance company will want to know about any pre-existing medical conditions, whether the dog is chipped, neutered, and their sex.

Your best off insuring the French Bulldog puppy as soon as you get him.

If you wait until a problem does occur, that will make getting insurance a lot harder, and more expensive as insurance companies won’t cover pre-existing conditions.

I would also recommend that you never just choose the cheapest pet insurance deal. The more comprehensive cover you can get the better when it comes to French Bulldogs.

Responsible pet owners will need to protect their French Bulldog as best they can against heatstroke and other health issues that are listed above that could affect their quality of life.

As well as your own care for your Frenchie, you will need to get pet insurance to cover any eventuality that could pop up due to the nature of this breed.

There’s every chance that you will have higher than average visits to the vet as a French Bulldog owner, so having the peace of mind you have the best insurance cover is essential.