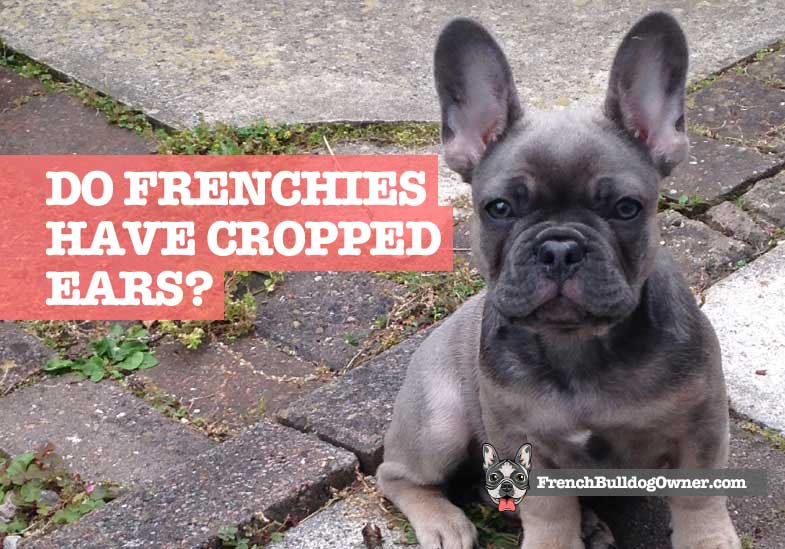 If you are looking to either buy a French Bulldog with cropped ears or are thinking about docking or clipping the ears of a Frenchie you already own, then please read this guide. Ear cropping, clipping, and docking is a hugely controversial subject, and also has legal implications surrounding it.

Do French Bulldogs have their ears cropped? French Bulldog ears are not cropped, clipped, or docked. They naturally stand up, and there is no reason, cosmetic or medical, for a Frenchie’s ears to get clipped. Ear docking is illegal in the UK. In the US it’s relatively unrestricted in most states.

French Bulldogs do not need to get their ears cropped. Some breeders say that cropped ears help with health including reducing the chance of ear infections and improving hearing. However, this isn’t true as there is no scientific or medical research conducted to support this claim.

The American Kennel Club list cropped ears as being part of the breed requirement for certain dogs; and purely for cosmetic reasons. However, French Bulldogs are not on this list where docked ears are needed for pedigree shows and appearance standards.

The most common breeds in the United States where cropped ears are listed in their standard include Boxers, Doberman Pinschers, Great Danes, and Schnauzers.

Ear cropping is banned in many countries around the world as it’s considered to be cruel and the cause of unnecessary suffering. You can read more about the law in your country lower down the page.

How do French Bulldogs have their ears cropped?

French Bulldogs can have cropped ears in the USA. In the United States, dog ear cropping isn’t as heavily restricted as in other parts of the world. That means you might come across French Bulldog docked ears more than anywhere else globally. However, if you do see clipped ears, it’s completely pointless.

However, cropped ears are not part of the Frenchie breed standard as set out by the American Kennel Club. If you do see a French Bulldog with docked ears, then it will have been an entirely unnecessary procedure.

Frenchies have beautiful ears that stand up straight (in most cases). I wrote an article about why their ears stand up so well elsewhere if you want to know more.

If someone has chosen to crop their dog ears, it should only be done by a trained and licensed veterinarian. Here’s what happens:

How big should French Bulldogs ears be?

We’ve established that Frenchies don’t have cropped ears, but how big should their ears be? Classic Frenchie ears will be in proportion to their skull. If you look at this photo below of my Frenchie Claude, you will see how big his ears are as a puppy, and now as an adult.

Frenchie ears are huge when they are puppies, but as they grow older, they start to look more in proportion to their head.

Does it hurt a dog to have their ears cropped?

Whilst the American Kennel Club still currently stands by their position on ear cropping, more vets are now refusing to do it for cosmetic and breed standard purposes.

The American Veterinary Medical Association (visit the AVMA website) say it’s even unnecessary for medical purposes. Many vets believe it to be a painful process, that can also lead to health complications. The issues that can arise from ear clipping include:

Most ear cropping is performed on dogs that are still very young, between the ages of 8 and 12 weeks old.

At this age there are not just risks of anaesthetizing them, but also the chance of them developing a traumatic memory from the painful experience (source: PETA.org).

Whilst your Frenchie might be asleep during the operation, it’s plain to see that the recovery process from an ear docking procedure is bound to be painful. In fact, some vets say the ears will be extremely pain sensitive for many weeks, with some dogs possibly experiencing phantom ear pain.

Any human who has had an operation knows that there is pain afterwards, so there’s no reason to think it’s any different for dogs.

What does the law say about Frenchie docked ears?

The legalities or dog ear cropping in the USA depend on which state you reside in. There are regulations on cropping your Frenchie’s ears if you live in:

To see what the regulations prohibit in these states, read the documentation on the AVMA website.

As a general observation, ear cropping is unrestricted in the majority of the United States and Canada. Undoubtedly a lot of this is down to the influence of The American Kennel Club (AKC) who believe ear cropping is “integral to defining and preserving breed character” in certain breeds.

Ear cropping is completely prohibited in England and Wales. The kennel clubs in the UK banned it over 100 years ago and it’s illegal as part of the UK’s Animal Welfare Act of 2006.

Any dog that has cropped ears is not allowed to enter Kennel Club events. However, there has been a sharp rise in recent years of ear cropping as reported by the RSPCA. Many of these cases have come to light with dogs being sold on social media platforms.

According to a report in The Telegraph newspaper (view source), the RSCPA was quoted as saying:

“We believe ear cropping is being carried out illegally. We also believe that many breeders, sellers and buyers are sending dogs abroad to have their ears cropped before bringing them back home. This is going on within certain close-knit breed groups, so we believe that many cases are slipping through the net unnoticed and that the issue is actually much bigger than we are aware.”

Should you get your Frenchie’s ears cropped?

If you live in a part of the world where ear cropping isn’t prohibited, then the choice will be yours. However, I would 100% recommend against it. It will be painful to your Frenchie, has no health benefits, and will not make them anymore a French Bulldog than they already are.

Debunking the myths of ear clipping

Here are a few myths that fans of ear cropping often come out with, with a very short debunking on each one (thanks to PetHelpFul.com).

French Bulldogs do not have docked ears, and they should not be cropped. But why would anyone ask this question in the first place?

I think it’s down to how sharp looking Frenchie ears are. Most of the time they stand up very erect, so I can forgive someone naïvely thinking they might have been clipped.

I remember when Claude was younger, a complete stranger thought he had a docked tail. You can read more about why they thought this in my guide to French Bulldog tails. It’s probably a similar lack of knowledge with cropped ears.

But it’s not the case at all.

Here are some other blog posts I’ve written about Frenchie ears and related topics.