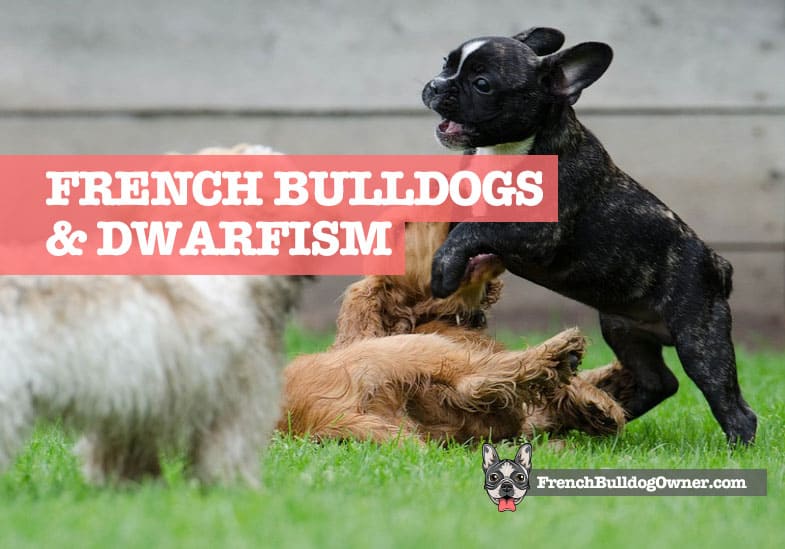 In this quick guide I will share with you what I’ve learned about dwarf French Bulldogs, and why it’s something you should always be aware of when looking to buy a dog. I will also explain the differences between dwarf dog breeds, and the dwarfism condition (aka osteochondrodysplasia) that can occur in puppies.

Whilst Frenchies are by definition a dwarf breed, people also refer to French Bulldog dwarfism; the two do seem to be interchangeable. How I will treat the two terms in this guide is explained below.

1. French Bulldogs as a dwarf breed

There are many breeds of dog who are in the “dwarf breed” category. They are defined as short legged dogs who have been deliberately bred with the achondroplastic genetic condition. The condition leads to dwarfism with the primary mutation being the long bones in their legs becoming shorter.

DNA testing has been conducted on dogs to identify which breeds have this mutation. French Bulldogs have the dwarfism DNA, alongside with breeds including Pugs, Dachshunds, English Bulldogs, Terriers, Basset Hounds, and Corgis.

When I talk about French Bulldog dwarfism, I am referring to the hereditary osteochondrodysplasia condition which can have serious health implications for dogs. In fact, some dogs will even need to be put to sleep when young due to the pain it can cause

Can French Bulldogs be born with dwarfism?

Yes, French Bulldogs can be born with dwarfism. The genetic mutation can either happen due to the luck of draw, or by design where breeders deliberately attempt to create dwarf French Bulldogs.

Dwarfism is a genetic mutation that results in bone disorders, affecting growth and development. It results in abnormalities such as shortened legs and can lead to a lot of pain in the dogs back, hips, legs, and joints.

Do all French Bulldogs have dwarfism?

As I’ve explained, Frenchies are a dwarf breed, but it doesn’t mean all French Bulldogs have dwarfism as I’ve defined it; being the inherited bone abnormality.

Dwarfism takes things to a whole new level and can be engineered by breeders or happen by bad luck due to genetics.

How some breeders encourage dwarfism

In recent years there has been a trend for Teacup French Bulldogs. They are created breeding larger dogs to be smaller, leading to the smallest possible dog. I don’t agree with this at all and will cover the Teacup variety in more depth another day.

But the reason it’s relevant here is because mini Frenchies are created by breeders by actively encouraging dwarfism. They will take a Frenchie who already has genetic dwarfism or the runt of the litter, and use them to make an extra small litter of puppies.

The unscrupulous breeder will then take the smallest of the litter that produce, and sometimes even inbreed them again to create an even smaller litter of Frenchie puppies with dwarfism.

By using this multiplier or domino effect, they can cultivate the dwarfism genetic mutation thus creating saleable assets in the form of Teacup Frenchies.

And why is this a problem?

It’s because it leads to health problems such as heat intolerance, breathing issues, and potential spinal problems – more of which below.

The breeding of Frenchies to encourage dwarfism can lead to a wide range of health problems. French Bulldogs don’t have the best health track record anyway, and dwarfism can multiply those issues further.

The symptoms found in dwarf French Bulldogs can include some or all of the following:

Your dwarf Frenchie might not have all of the symptoms above but will certainly have a lot of them. It can lead to a lifetime of vet bills and pain for your dog, often resulting in a reduced lifespan.

There’s also the consideration of how mobile and robust your Frenchie with dwarfism will be. Put simply, they might be so fragile that you will end up hurting them completely unintentionally.

Frenchies love to play (here’s how), jump, and run. When you put dwarfism into the mix, they won’t be able to do simple things like jump into a bed, step up some stairs, or play with your kids without risk of injury and pain.

Unfortunately, there is no easy treatment for dog dwarfism. In some cases, vets might be able to prescribe drugs to stimulate growth hormones, but they are expensive and hit and miss in terms of results.

In more serious cases of dwarfism, it’s not unusual for Frenchies to only live as old as 4 years old, with some vets even recommending euthanasia before this age due to suffering.

Dwarf Frenchies that have better than average health will probably still need some degree of pain management or increased vet attention to lead a long and normal life.

Whilst there are unscrupulous breeders who will deliberately breed smaller Frenchies to increase the “cuteness” factor and therefore price, most are responsible and understand the risks.

The osteochondrodysplasia condition is hereditary so it can actually be stopped by breeders providing they DNA test their Frenchies. By doing so, it’s possible to then take the affected dog out of the breeding chain, reducing the chances of dwarfism in a litter.

As Frenchies are a dwarf breed, breeders should be encouraged to test both breeding parents before mating to reduce the genetic disposition of the condition.

My French Bulldog has dwarfism

If you do have a Frenchie with dwarfism, then there are a few things you can do to keep them comfortable.

Looking after a dwarf French Bulldog

I spoke to a vet I know about caring for Frenchies with dwarfism, and here’s what she said to me over email:

“As there is no known cure for osteochondrodysplasia, how it’s treated will depend on how serious it is with the dog. Most cases I have seen have been mild, and the puppies have grown to lead perfectly normal lives. Many dwarf dogs will be given pain relief and anti-inflammatory drugs, but almost all of them will have arthritis as they get older; being sooner than most other dogs would get it. I have also seen some very serious cases in my time, where the bones have been so badly deformed that surgery has been the only option, with euthanasia being a possible final stage.”

I also put together some additional care tips below:

Most dwarf French Bulldogs will only have a mild form of the condition. However, this will mean you need to take a different approach to dog care compared to a standard Frenchie.

If you are thinking about buying a mini or Teacup Frenchie, please do think again. The potential for health problems, shortened lifespan, plus the unsuitable nature they are family pets warrants debate.

I’ve published some very popular guides which are designed to help potential new Frenchie owners decide whether this is the dog breed or not for them. It’s a very serious decision, so please do take your time.