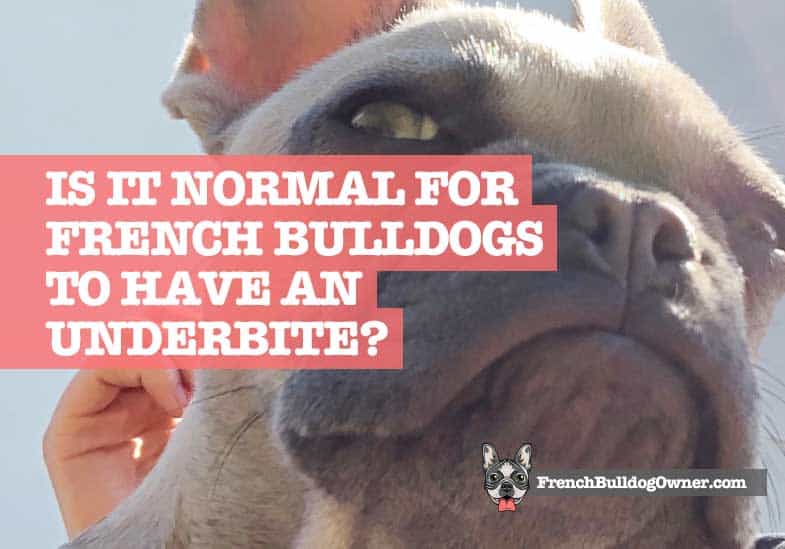 Some Frenchie puppies will have a very pronounced underbite, but not all of them; for example our own Frenchie doesn’t have one. I wanted to find out a little bit more about French Bulldog underbites, whether they were normal, and what problems they could be a sign of. Here’s what I discovered.

A French Bulldog underbite is normal and inevitable due to the nature and structure of their skulls. In fact, top breeding competitions consider it a disqualification if you have a Frenchie that is over five months old with no discernible underbite.

Why do French Bulldogs have underbites?

There are a few medical and genetic causes as to why French Bulldogs have underbites.

Their heritage is the major reason for an underbite in Frenchies. It’s a genetic trait which passes down through the generations as a by-product of their breeding.

There are other causes of underbites in French Bulldogs that fall into two distinct categories; skeletal or dental.

An underbite won’t be a problem if your Frenchie is able to groom itself, drink and eat without any pain or bleeding.

However, there are some health problems that may arise which you need to keep a close eye on if you think there is a problem that doesn’t appear to be normal.

Those health problems caused by an underbite can include:

I just want to be clear though; it’s not very common for underbites to become problematic in Frenchies. A small underbite is perfectly normal but do keep an eye out for any problems like the ones listed above.

Want to know more about health problems? I’ve listed over 30 possible health issues your Frenchie could be suffering from. Read this master list so you know what to look out for.

My French Bulldog has a severe underbite what should I do?

If you do have any concerns at all, stop reading my blog post and take your dog to the vet. Even if it’s a small underbite, it is still worth getting a professional opinion as to whether it could lead to a problem in the future.

Your vet will be able to check for signs of pain and infection and also let you know whether the underbite is a severe enough to warrant further investigation.

Even if your vet does give your Frenchie the all clear, make notes of any obvious behavioural changes, particularly ones where they have obvious pain when eating.

If you see anything like them having trouble eating, observe blood in the saliva, or they have unusual sensitivity around their nose and mouth, that’s the time to take it seriously.

Can you fix the underbite on a dog?

An underbite can be one of your Frenchies most appealing features. I think it looks cute in puppies… you might not agree!

Most underbites in Frenchies are very mild and require little or no action at all.

However, in very rare cases underbites can be so severe that they will need correcting.

There’s nothing you can do as an owner to fix it, and there really is no quick fix. But there are some medical procedures that can help to reduce any problems if addressed in adult dogs.

How you can help your Frenchie with an underbite problem

Surgery should really be the last resort, so if you are concerned that your own dog’s underbite isn’t normal and needs a little relief, there are some things you can do.

I chatted to another Frenchie owner to get these ideas:

Which dog breeds have underbites?

I mentioned earlier that the dogs most prone to underbites are ones that have certain genetic qualities. Short-faced breeds are particularly at risk of this peculiar quirk.

Breeds most susceptible include:

I don’t want to alarm you. It is normal for French Bulldogs to have an underbite, and I hope I’ve explained as best I can why they have.

Just be aware of it though, as in very rare cases they can cause complications.

Let’s face it, dog underbites can be very cute and make our pups look very adorable. It certainly adds to their funny character.