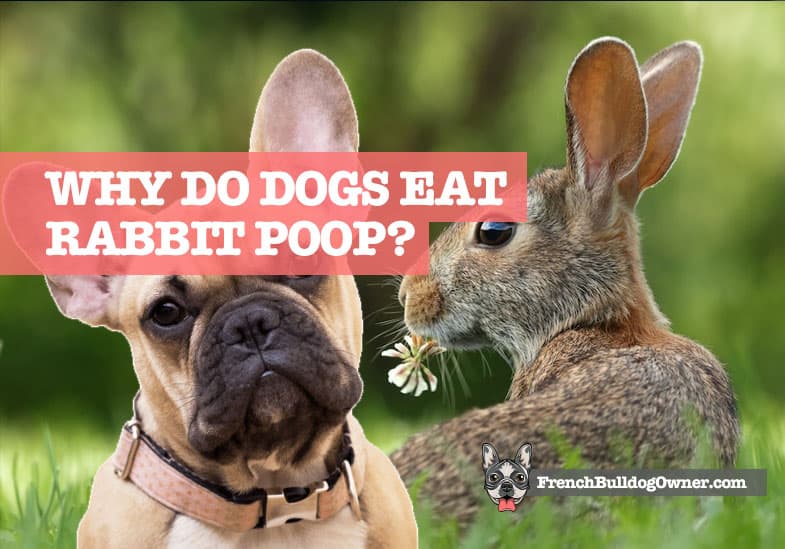 We live in a part of the country where bunnies are rife, so when our two Frenchies aren’t chasing rabbits, they are eating the poop and droppings. And right after… want to give us a kiss. No way!

But it does make me wonder why dogs eat rabbit poop, as surely it can’t be a tasty treat… although I admit it can look like kibble. Here’s the short answer followed by some interesting detail and warnings.

Dogs eat rabbit poop because they are food motivated, greedy, and curious. Rabbit poop has interesting smells in it, and your dog could like the taste. Rabbits eat vegetation, as do some dogs. But it could mean your dog lacks some nutrition in their diet.

Should you be worried about your dog eating rabbit poop?

The answer is both yes, and no. The reason for that is lower down the page, where I explain what happens if dogs eat rabbit poop, and why they are so attracted to eating it.

Why did my dog eat rabbit poop?

Studies have shown that one in six dogs indulge in eating poop on a regular basis. And they really aren’t fussy either, eating their own poop, rabbit poop, or more disgustingly… the poop of other dogs!

But you will be happy to hear that most vets do not consider the behavior to be a source of concern.

The reasons why dogs eat rabbit poop, or even their own, are manifold.

The behavior starts off in the whelping box when a mother cleans her pups. These pups may become socialised and continue the practice. Dogs also eat poop because they are curious, anxious, hungry, or ill.

There are problems associated with our pampered pooches wolfing down rabbit poop, but not as many as you would think. However, it does make you think twice about kissing one of these perpetrators, or letting it lick your plate.

The scientific term for this behaviour in general is ‘Coprophagia’. When an animal eats the poop of its own species, it is known as ‘Conspecific Coprophagia’. According to a web-based survey conducted in 2012, one in four dogs occasionally eat poop, while one in six are regular partakers. The behaviour seems to be more prevalent in multi-dog households.

It is generally considered to be harmless and has not been correlated to a lack in the dog’s diet. Supplements will not cure this behaviour.

It has been thought that Coprophagia can lead to the spread of infectious diseases or intestinal parasites from one animal to another.

Others believe that the consequences are lessened somewhat because dogs tend to prefer dining on fresh dung, which does not allow the parasite eggs time to mature.

In addition, many diseases and even parasites, are species specific, and therefore will not be transmitted from one species to another. Dogs have a greater chance of contracting diseases if they eat the actual carcass of a dead animal, something that most dogs are not averse to doing.

The fibre in thoroughly digested inter-species dung may even benefit your dog’s digestive system.

Each case needs to be judged on the condition of the dog, and any symptoms displayed. These include problems such as vomiting, diarrhea, and lethargy. In the long term, look for a dull coat, itchy or broken skin, and weight loss.

If your dog suddenly starts eating rabbit poop, this change in behavior should be brought to the attention of your vet.

More reasons why dogs eat rabbit poop / their own poop

In the wild, wolves clean around their dens by eating the faeces of their pack members. This helps to hide the smell of the den and keeps away curious predators.

As much as dogs and their ancestors gather information from scents they pick up, their predators can also tell whether there are vulnerable, young, or sick animals that they can capture easily.

Wolves also clean up after their sick family members so that whatever is plaguing them does not spread to the whole pack. Pathogens, and parasite eggs in fresh dung, do not have long enough to incubate, and are rendered harmless by passing through the gut of a healthy animal.

3. Mothers and their pups

Many of us have observed mothers eating the umbilical cords of their newborn pups, and licking them as soon as they pee or poop. This serves to keep the whelping box clean, and also helps to stimulate the passage of any waste products through the pups’ digestive and urinary systems.

Puppies of a very young age are not aware of what their mothers are doing. If her behaviour persists when they are older and more alert, they may pick up the habit from her and become poop eaters themselves.

Puppies, like human infants, explore the world with their mouths. Poop is just another object of curiosity. If they acquire the taste, this behaviour may persist.

If a pup’s environment is impoverished and they have little else to explore, they may continue to fixate on their own poop, and that of their litter mates. They may also continue doing so if their diet is boring.

Mature dogs that are kept on a chain or confined to a small space may also resort to eating their own faeces.

Poop scavenging will extend into canine adulthood if the opportunity presents itself. When dogs explore the habitats of other species, the taste, texture and smell of rabbit poop will pique their interest, and they be will tempted to give it a try.

Many dogs have the luxury of sharing a household with a cat. The litter box is a source of protein-laden treats, on demand. Many multi-species homeowners have marvelled at the cleanliness of their cat trays.

Out on a country walk, fresh, solid dung is a firm favourite, surpassed only by that frozen winter delicacy, known as ‘poopsicles’. These are particularly easy to spot after fresh snowfalls.

Looking for rabbit and sheep pellets, in any season, is like going on a treasure hunt, whereas carnivore dung is much sought after, for its protein content.

Rolling in foreign faeces is an added benefit, the human equivalent of picking up a souvenir on your travels. Fox poop is first prize, on all counts.

If you object to this sort of rabbit poop fest, and chase after your dog, arms flailing, it may just be seen as a delightful game to play. Your dog will run off with the prize, attempting to swallow it all before you get can catch up.

Of course, the fun is amplified if you have more than one miscreant, as they will head off in different directions, and you will never win. They will look for opportunities to repeat the spectacle.

One of the reasons that dogs may feel poop-related stress occurs when the owner overreacts to their dog pooping in the wrong place. The dog will eat their own poop to remove the evidence and thereby escape punishment.

Dogs are sociable animals and may also feel stress when isolated or left alone for long periods of time, without solace. They may eat their own poop as a self-soothing mechanism.

Greedy dogs and those that are perpetually hungry are more likely to be poop-eaters. Their stimulus-response mindset makes them less discerning.

If your dog is constantly needing to eat, the cause needs to be investigated. There may be underlying metabolic problems, such as diabetes, thyroid problems, or Cushing’s disease, which is caused by too much cortisol in the system.

There are several manufacturers of dog food that do not meet the exact requirements needed by a dog’s digestive system. Dogs have short digestive systems that cannot extract nutrients out of grain and other starchy products. These pass through the dog’s system undigested and end up on your lawn.

The smell, shape and consistency of the substance going in the dog’s mouth often looks remarkably similar to that which passes out its back end. The dog gets confused and has another go at digesting the ‘pellets’.

This is not uncommon in the animal kingdom. Rabbits, for example, produce two types of pellets. Those produced at night, contain residual nutrients, and are intended for later consumption. The daytime production has been thoroughly digested and contains only fibre. Unfortunately, most dogs do not have access to the night-time specials.

13. Their poop is too near their food

In the wild, wolves and dogs will keep their living quarters clean, and will distinguish between their feeding area and their toilets. If dogs have no control over their environment, they may get confused between their food and their waste, and end up eating the latter, if they are too close to each other.

What happens if a dog eats rabbit poop?

From vet journals I have read, I don’t believe dogs usually get sick from eating rabbit poop. I do recommend you ask your own vet though to be 100% certain. Here’s what one vet says:

“It is important to note that eating rabbit droppings does not mean that your dog has a dietary deficiency; it’s just a gross habit.  In addition, the types of parasites that rabbits can pass in their stool, do not cause infections in dogs.”

Can a dog get leptospirosis from eating rabbit poop?

Dogs can get leptospirosis from contaminated water. I also know that rabbits can carry it, so if you are worried, this is really a question you need to ask a professional.

Dogs eat disgusting stuff, like roadkill, old bones, and the most unsavoury of all, rabbit poop!

In most cases, it’s nothing to worry about. But some dogs will get diarrhea and vomit from it – if this happens call a vet.