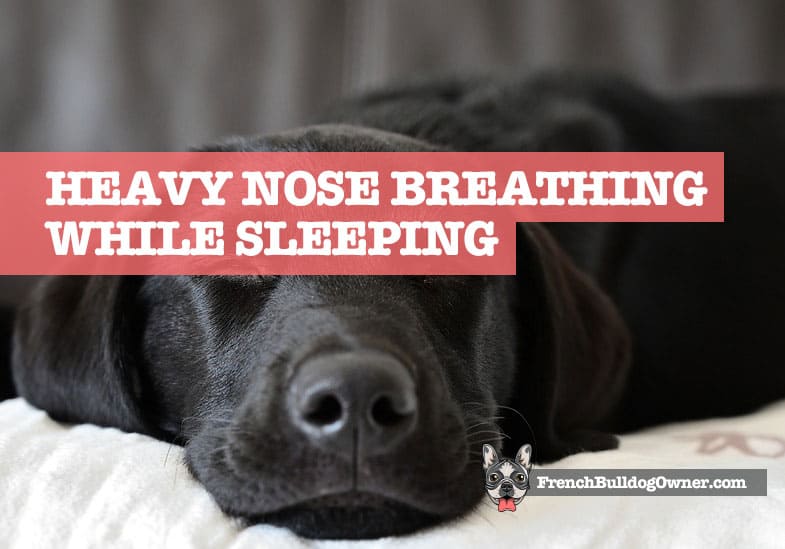 The old adage says you should let sleeping dogs lie, but is your dog is breathing heavily through nose while sleeping, is this wise? Well, yes, and no. Many dogs will breathe fast through their nose while asleep, and it can get very heavy sounding… and of course, that’s a worry.

But please don’t panic just yet. Many dogs, and dog breeds, will breathe fast through their nose while sleeping, and there’s nothing unusual about it. Below you can find out what the rapid and heavy sleep breathing might mean, and whether you should act.

Why does my dog breathe heavy when sleeping?

In most cases, your dog will be breathing fast through his nose when asleep because he’s in the REM stage… aka REM (rapid eye movement) sleep. This is something that us humans do, and our canine friends. We and dogs will breathe a lot quicker during REM sleep, and this often manifests itself with short and quick breaths through the nose.

“Dogs sleep more than people do, Coren told Live Science, and they have a particular penchant for catnaps. But the structure of their sleep looks remarkably human: Like humans, dogs cycle through stages of wakefulness, rapid-eye-movement (REM) sleep and non-rapid-eye-movement sleep.” LiveScience.com, What Do Dogs Dream About?

Interestingly, dogs are more inclined to breath heavily and fast through their nose during sleep as puppies, and older dogs. Dogs in the middle years aren’t as likely to breathing heavily through nose while sleeping at all.

But, in some cases it can be a sign of a potential health problem, so you need to know what to look for if your dog is breathing heavily through their nose whilst sleeping.

According to various veterinary websites, monitor the fast nose breathing. Does it last for just a few minutes? If so, it’s probably fine. But, if your dog breathes fast through their nose all night and all the time, that could be the significant.

But just what is it about your dog’s rapid breathing that is the difference between a deep REM sleep or a possible concern? Well, here’s what all those vets that I read up on said.

When is heavy nose breathing in sleep normal for dogs?

The Live Science website say dogs go into the REM sleep about 20 minutes after they nod off. At this point you might start to see your dog breathing heavily through his nose, or breathing fast through his nose while sleeping.

You might also notice some other tell-tale signs they are in REM, which when matched up with the heavy and fast breathing is perfectly normal.

If you see this happening with your dog for a few minutes, then you should not be alarmed. It’s normal behavior, particularly if they wake up after and don’t appear to be acting differently to usual.

If your dog is in a deep sleep, and in the throes of REM with that breathing fast through the nose, don’t jolt them awake. If they are in a dream they could react and lash out if surprised.

When is heavy nose breathing in sleep a cause for concern then?

If your dog is breathing fast through their nose in sleep or after physical exertion when awake, it’s perfectly normal. However, times to possibly speak with a professional about rapid nose breathing would include the following…

How fast should a dog breathe while sleeping?

Based on the advice from VCA animal hospitals, count how many fast or heavy breaths you dog is having in a minute. If it’s more than 30 breaths per minute, then ask your vet to make a diagnosis.

With dogs like French Bulldogs and other Brachycephalic breeds it’s more important to keep a close eye on why your dog is breathing fast through their nose during sleep. If they start to breathe very rapidly and heavily, they will start to struggle and it’s the sign of a possible issue to be looked at.

Related questions on breathing and sleeping

Hopefully the insight into why your dog is breathing heavily though his nose while sleeping has given you some peace of mind. There are other things that dogs do when asleep that can also worry new owners… here’s all you need to know.

How many hours in a day should a dog sleep?

On average, a breed like a French bulldog will sleep for 13 hours a day. Our dog will quite happily sleep all night for up to 10 hours, and then have more naps in the day.

However, puppies will sleep a lot longer.

If you have a puppy, not only will they breathe heavily through their nose while sleeping but will also need to sleep up to a mammoth 20 hours in a day!

“Similar to babies, puppies will play and explore their new surroundings until they drop. Therefore, they might need up to 18 to 20 hours of sleep to recharge their batteries. Because they aren’t yet physically capable of going for long stretches overnight without relieving themselves, they will require a sleep schedule.” American Kennel Club, Should I Let My Dog Sleep Late Every Day

Older dogs will also need a lot of sleep as they will tire easier as they age. This is normally of no concern, unless you see other changes in habits – for example digestive issues, crying in the night, and other unusual things.

Why do dogs sleep so much?

Dogs need more sleep than their human owners, so to us it looks like they sleep a lot. Unlike us they don’t feel like they are slaves to routines, so will sleep when their body tells them it’s tired.

According to PetMd.com, sleep is very important to our furry friends:

“All day long, electrical activity is happening in our brain, and random, disorganized data gets stored in various places,” says Dr. Nicholas Dodman, professor emeritus at Tufts University. “We organize that in our sleep, and dogs do, too. It’s very therapeutic, and if you deny dogs that, they’ll kind of lose it.”

It’s also thought that if a dog doesn’t get enough sleep, it can develop a bad mood. Sounds familiar doesn’t it!

This is particularly true with larger breeds who will need more sleep due to their size and the energy they use up. Older dogs also need more sleep, but for different reasons.

Scientists have tested canine brain waves and found that when sleeping, dogs exhibit similar deep sleep and REM like us, which could indicate your dog is dreaming.

But that doesn’t mean they dream like we do.

Dogs are said to spend 10% of their total REM sleep compared to us who spend 25% in REM. As they spend less time in the dream state, it’s possible that their dreams are more simplistic than ours.

Is my dog having a seizure or dreaming?

When you dog starts breathing heavily through his nose while sleeping, with rapid and fast breaths, it’s natural to think that something might be wrong with him.

Seizures can also be quite similar to the behavior that dogs exhibit whilst dreaming. But it’s important to understand that a dog having a seizure will probably have stronger physical reactions in sleep.

If the dog wakes up and is sleepy, it’s likely a dream.

On the other hand, if your dog wakes up and is confused and anxious, that could point to something more serious.

In conclusion, if your is dog breathing heavily through his nose when sleeping, it isn’t typically something to worry about providing it’s not a constant thing.

Fast breathing through the nose while sleeping is very natural but should only last for a few minutes. Longer than 10 minutes and they should be out of the REM stage of sleep.

If the fast and heaving breathing in sleep does last longer than this, and you see other strange symptoms, check in with your vet just to be sure.