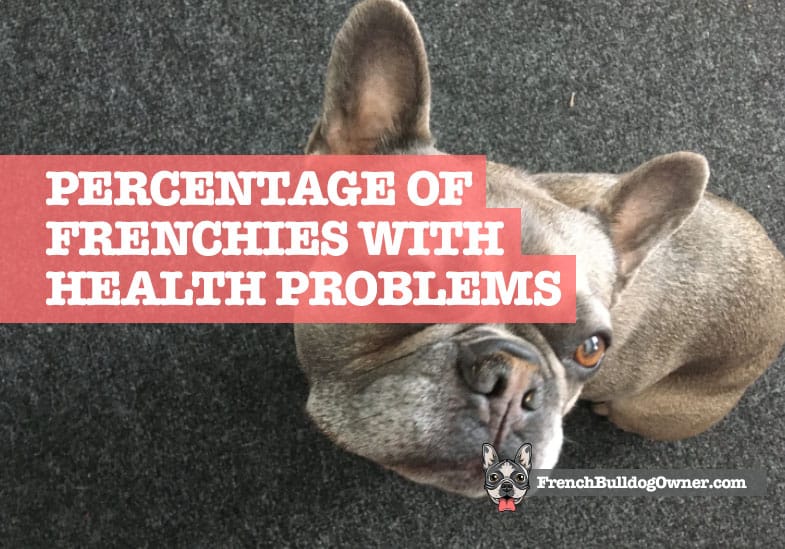 Getting a Frenchie is not a decision you should take lightly. But given their surge in popularity, it’s inevitable that some owners won’t do the correct due diligence before buying, with one of the biggest issues being the health problems common with this breed.

In this guide I will explain just what percentage of French Bulldogs have health problems and how common each of those different diseases and conditions are in both the male and female genders of the breed.

It makes for sobering reading, and for some, might make them question where they stand ethically when buying a Frenchie.

What percentage of French Bulldogs have health problems?

The study was said to be the largest ever conducted on the French Bulldog breed, with Dr Dan O’Neill (read bio), a senior lecturer at the Royal Veterinary College saying this about the research:

“French Bulldogs are a relatively new arrival to the list of common UK breeds, so there has been very little previous research on them. Our study provides owners and vets with information on the issues that they could expect and should look out for in French Bulldogs. It may also assist potential new owners to decide whether this is even the right breed for them.”

Handy Hint: I have explained in more detail what these French Bulldog health problems involve in this more in-depth guide to Frenchie health.

Male French Bulldogs have a higher percentage of health issues

The study also made an interesting observation about the difference between the genders, with males French Bulldogs having a higher percentage of health problems than the females. They tended to be more at risk of 8 of the 26 most common health problems.

A spokesperson for the research said:

In the table below you can see how the two genders are split with the different health issues recorded in the study.

What percentage of French Bulldogs have breathing problems?

Breathing problems are one of the most common health problems reported by vets and Frenchie owners, and the study found this a recurring theme too.

Research published in the Journal of Veterinary Internal Medicine found that a massive 66% of French Bulldogs have breathing problems, with complaints including stenotic nares, upper respiratory tract disorders and infections, plus brachycephalic obstructive airway syndrome.

You can read more about this study and the percentage of Frenchies with breathing problems on the Wiley Online Library.

The reason a large percentage of French Bulldogs have breathing problems is entirely breed related. They are brachycephalic meaning they have been bred to have shorter snouts and squashed faces.

This genetic trait has got more exaggerated over the years, making the breathing issues progressively worse.

For example, the dogs can become over-heated and short of breath in hot weather or over-exertion. Respiratory distress and labored breathing are something that most Frenchie owners will see in their dog’s lifetime.

Handy Hint: You can compare what Frenchies used to look like 100 years ago in this post, with the snouts looking significantly longer historically.

What percentage of French Bulldogs have IVDD?

The percentage of French Bulldogs with IVDD (intervertebral disc disease) is said to be much higher than that of other breeds, but I was unable to find an exact figure.

I did however find a study published in 2017 found that IVDD is a very common health problem for Frenchies. With conservative estimates saying that 2% of all dogs tend to get IVDD, you can assume Frenchies will be higher than this number.

In the study they looked at 533 Frenchies who had existing neurological diseases. The research found that 45.5% of them were afflicted with Hansen type I intervertebral disk herniation (IVDH).

This type of complaint has a higher percentage in dwarf breeds, particularly in Frenchies who have genetic dwarfism.

Given that we know a high percentage of French Bulldogs have health problems, you should have your health tested with regular trips to the vet. The types of tests available are as follows:

Should we stop buying Frenchies?

If there wasn’t a demand for French Bulldogs, there wouldn’t be so many of them with health problems. Which leads on to a question of ethics, and whether we should even buy them in the first place, given that we know this leads to more puppies being born with health issues.

I decided to canvas the opinion from two different sides of the argument.

Those in favor of breeding

I went on social media and got in touch with some French Bulldog breeders, who as far as I can tell are in the responsible and ethical bracket. I asked them what they thought about the high percentage of French Bulldogs having health problems.

Here is a selection of their comments, which they asked to remain anonymous:

“The high percentage of Frenchies with health problems has been inflated by irresponsible breeders looking to make quick money. They ignore the health issues and continue to breed male and females with existing hereditary conditions, which isn’t helping!”

“I’ve worked as a breeder and a judge and will not reward a Frenchie that has any breathing issues. We all need to start moving away from the flat noses, and the tight nostrils that can plague this breed.”

“There are some terrible breeders out there who are encouraging conditions like dwarfism. They give us a bad name, but sometimes it is purely down to ignorance. By educating people we can start to get the health problems percentages lower over the next 5 to 10 years.”

I then wanted to get some opinions on the opposite side of the argument from people who thinking breeding French Bulldogs is not acceptable due them being so prone to diseases.

“I don’t believe there is such a thing as ethically breeding French Bulldogs. They suffer hugely due to the demand in the way they look. Health testing isn’t going to make a difference on this, until the demand for that certain look changes… give them longer noses!”

“There’s something I read on Quora recently which sums it up; if a person performed surgery on a dog to give it a really flat face, tight nostrils, and a shortened nose then they would be charged with a criminal offence. But if you breed them like that, it’s perfectly fine, go figure.”

“It’s no surprise Frenchies have such a high percentage of health problems when you see the way in which they have been changed so much to look how they do, compared to what they looked like fifty years ago.”

Of course, owners are going to be very protective over their decision to buy a Frenchie despite knowing the health problems they can develop. I found a few relevant comments on Facebook regarding the matter:

“They are sadly very badly affected by allergies and some also suffer with BOAS. They are gorgeous dogs but don’t even think about having one unless you have deep pockets and a vet you know and trust as you will probably be seeing a lot of them!”

“One of Frenchies has no health problems. The other has allergies, hip dysplasia, had cruciate ligament damage. That meant two operations before she was even one year old, plus a whole load of physio and hydrotherapy. My advice is to get great insurance.”

“They aren’t one of the most expensive dogs to insure for no reason. But French Bulldog health issues often don’t show until they are adults. In many ways they aren’t a robust breed. Personally, we’ll always rescue as sadly too many don’t research enough about the breed and training problems begin that owners can’t manage. Some people aren’t really responsible enough to take on the commitment of a Frenchie dog and then there’s those who face unexpected life changes. Rescues have to then pick up the pieces.”

“Do your homework before you make a decision. There is plenty of information on the internet. As said previously though, do make sure you have adequate funds as there can be lots of potential French Bulldog health issues and vet bills are steep. Sadly, this is probably why there are so many in rescue homes.”

What diseases are French Bulldogs prone to?

The most common health problems as a percentage are listed above in the table. In terms of how common certain diseases are, here are the more common ones:

What do most French Bulldogs die of?

According to the Finnish Kennel Club, most French Bulldogs die of cancer. They say that cancer accounts for 38% of Frenchie fatalities. However, the data from the study in the UK shows different percentage rates against other illnesses.

Those reasons are shown in the table below:

French Bulldog ownership has soared in recent years, jumping from them being just 0.02% of puppies born in 2003 to 1.46% in 2013. I would assume that figure is even higher today.

Knowing what we now know about the high percentage of health problems in French Bulldogs, it will hopefully mean breeders and animal charities can prioritize health issues in the breed.

One would hope that this could possibly lead to a change in breed standards, meaning the physical characteristics that lead to health problems aren’t as pronounced.

However, that time hasn’t come yet.

So, if you are thinking about buying this breed, please do consider the abnormally high percentage of French Bulldogs that have health problems as part of your decision-making process.

Here are some other guides to help you make an educated decision: