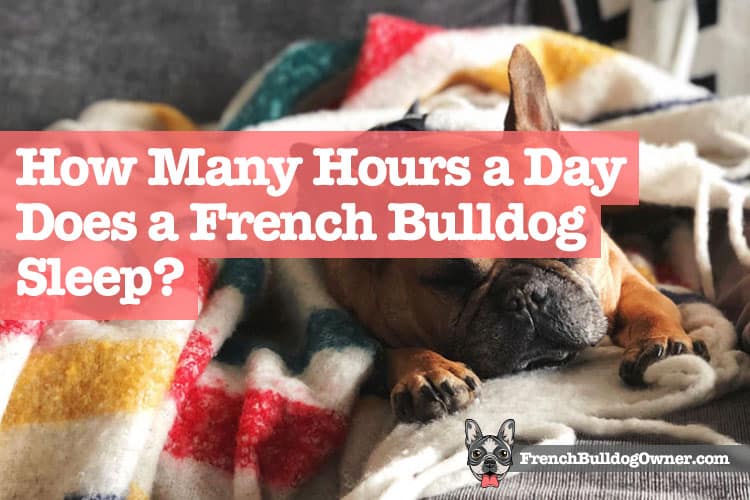 Before we got our Frenchie, Claude, we had heard how lazy this breed can be. Whilst Claude is anything but lazy, he certainly likes to sleep a lot. He uses up a lot of energy and needs to re-charge his batteries constantly. But how many hours a day does a French Bulldog sleep in total and what are French Bulldog sleeping habits like?

How many hours a day does a French Bulldog sleep? On average, a French bulldog will sleep for 12 to 14 hours a day. Our particular Frenchie will sleep all through the night without waking for 7 hours, and then during the day will intermittently sleep for a few hours at a time, totalling another 7 hours on average.

Below you can see a typical daily timetable and sleep schedule for Claude. This show his daily sleeping schedule and patterns. It’s not always like this, but this is pretty typical of what we see with our own Frenchie.

I also put a graph together below which shows you what this sleep schedule looks like pictorially, running from 7am in the morning, through a 24 hour period.

Not every day is the same, but the above is a pretty decent stab at what you might expect on average. Occasionally he will also have a mini-nap around mid-morning.

Important: Dogs sleep for more hours in a day than they actually are awake. But just because they are going to be napping like kings for hours on end, that doesn’t mean it’s ok to leave them at home when you go to work.

How many hours a day does a 3-month old French bulldog sleep?

If your puppy is between 8 and 12 weeks old or 3 months old, he could be sleeping for as much as 18 hours a day.

I know that the temptation will be to wake him, as they are so much fun at this age. But please don’t, let him sleep as if he doesn’t get enough hours in the day it could impact on his health.

Does my French bulldog sleep too much?

The answer to this question is probably no. Whilst it might concern new dog owners that their Frenchie seems to be sleeping most of the day, it’s not unusual at all.

As a breed, French bulldogs tend to be a sleepier breed than your average dog. As an example, working dogs who are busy all day don’t have time to sleep, but Frenchies on the other hand love to snooze.

However, there can be some health issues to keep an eye on, if you feel that your Frenchie is exhibiting unusual sleep patterns and sleeping habits.

They aren’t easy to spot either due to the amount of hours in a day a French bulldog will sleep, but as a general guide look for:

Below are some of the more common questions I see people asking on Facebook about their French Bulldog sleeping habits and schedules.

Why does my French bulldog sleep with his eyes open?

Sometimes French Bulldogs will sleep with their eyes open. When Claude falls asleep, often it will be with his eyes half open. It’s not a good look and sometimes it will look like they have rolled into the back of his head!

I did some research online into why dogs and Frenchies sleep with their eyes open and found that this can be traced back to their ancestors.

Sleeping with their eyes open was a defense mechanism which would let them keep safe from predators whilst resting. Even though your Frenchie doesn’t have any predators, this particular quirk will still be present in his DNA.

However, do keep watch on him, as if he is twitching in his sleep it could be the sign of a seizure if it gets to be violent movements, so look for any unusual behaviour. However, please don’t panic. The most likely reason your Frenchie is sleeping with twitching legs and eyes will be because he is having a dream.

Why does my French Bulldog sleep on his back?

Your French Bulldog’s sleeping habits can be a great indication on how they are feeling. For example, a Frenchie who sleeps on his back will help him keep cool.

This is because sleeping with an exposed tummy will let heat escape, letting him keep cool and happy on a warmer night.

Sleeping on his back also means your Frenchie is very comfortable and doesn’t have any fear. He wouldn’t sleep with his privates exposed in the wild due to predators, so back sleeping means he is at ease and has no worries about threats.

Why does my French bulldog is make puffing noises in his sleep?

The physical make-up of a Frenchie is commonly known to lead to breathing issues. As brachiocephalic dogs they have short snouts. Our Frenchie snores constantly, and it’s sometimes a puffing noise as well. I’ve written more about why Frenchies snore in another blog post.

Handy Hint: If your French Bulldog’s snoring is becoming a problem you should read this help guide on how to reduce it at night.

They will make a lot of strange noises in their sleep, puffing be just one of them. Similar to rapid breathing which I will come onto next.

Why does my French bulldog have rapid breathing in his sleep?

Rapid breathing is a common issue during Frenchie sleep too, most of which is related to their snout and airwaves not being as free as other dog breeds.

But there are some signs that you should look out for. If your dog has rapid breathing in his sleep that seems unusual to him as a individual it could be a signal that:

If you are worried, wake him up and see if he still has laboured breathing. If he is also sitting up in an unusual posture or his chest is moving irregularly it could be the sign of something serious.

Why does my French bulldog’s tongue hang out when he sleeps?

A lot of Frenchies will sleep with their tongue hanging out (plus lots of drooling), and it’s not always a sign that’s something is wrong. In fact, YouTube has plenty of videos showcasing this cute and funny behaviour.

The following symptoms will often be seen in conjunction with hanging tongue syndrome. If you see any of the following, it’s a sign that there could be a health problem:

If your Frenchie can’t pull his tongue back in when awake to moisten it inside of the mouth, then this is the main indicator of the syndrome, and is best assessed by a vet.

Don’t confuse this with his tongue hanging out after vigorous exercise though. That’s perfectly normal when panting for a few minutes after a run.

French bulldogs are adorable. They will sleep for hours each day, and most of the time it’s nothing to worry about. The need their beauty sleep after all!

It is not at all unusual for a Frenchie for sleep up to 14 hours a day, or 18 hours as a puppy, so don’t be concerned.

But do be prepared, as once they wake up they will want your undivided attention!

Handy Hint: Another guide you might find helpful is recommendations on how far and how often you should walk your French Bulldog puppy based on my own personal experiences.