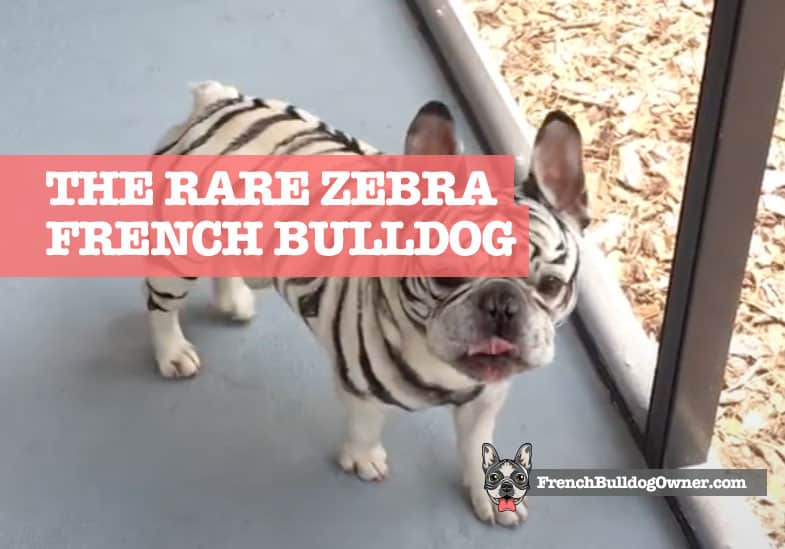 This blog post was originally posted on April 1st 2020.

If you are looking for a tiger striped or zebra French Bulldog for sale, then I have some great news for you. It’s now possible to buy a black and white zebra colored Frenchie from the Rare Breeding Company of Anaheim, California.

The breeders claim to have produced the first ever litter of zebra or tiger striped French Bulldogs after successfully altering the DNA of a Frenchie in partnership with a local research lab.

How much do zebra French Bulldogs cost?

The rare zebra French Bulldogs is priced at $8,000 per puppy and are sure to be a huge hit with dog owners looking for something completely different.

A spokesperson for the breeding company posted this on their Facebook page:

“We believe that our rare zebra striped Frenchies are one of a kind. If it’s zebra or tiger stripes you want to accessorize with this year, then one of these pups will be just the ticket. We also can’t help but think that given Frenchies tend to not deal with hot weather very well, this injection of African DNA is bound to make a huge difference!”

The tiger and zebra French Bulldog is fake

As I hope you will have guessed, the article above was a fake, and something that I originally published on April the 1st, 2020, yes, April Fool’s Day. Some people didn’t get it at the time, and there were a few comments on social media from people reacting negatively to it and debating our Pinterest board.

My April Fool’s certainly seemed to grab some attention, as it appears that there are some people who think a black and white zebra French Bulldog actually exists. This is probably due to a viral video in June of 2019 which you can see below.

The story behind the “rare zebra” French Bulldog video

The original tiger French Bulldog is a Frenchie called Loki who belongs to a professional make-up artist in the United States. The sister of Loki’s owner was ill, so the make-up artist decided to transform Loki into a zebra and tiger striped looking creation, using a Siberian tiger as inspiration. Here’s what she said:

“My sister had some worrying news from the doctor, and I wanted to cheer her up. I am a professional makeup artist and body painter and since she loves Loki, we just teamed up to bring a smile to her face. The white Siberian tiger was my inspiration. This was filmed in our backyard and there was some gardening work going on, so Loki was making sure we were safe by barking at them. After taking some pics and video. We bathed him. We used water-based organic face paints. He is like our child, and I would never use anything that would hurt him or be bad for him.”

It appears that her original intention was to make her Frenchie look like a striped tiger, but once the video went viral, it seems that people started to believe you could actually find zebra French Bulldogs for sale!

This is where I had the idea of pretending you could buy a zebra Frenchie for $8,000 on my April Fool’s prank post.

The reason I posted it was to raise awareness of how Frenchies are bred by some unscrupulous breeders to make a quick buck.

For example, some breeders deliberately try to create smaller, teacup Frenchies with enhanced dwarfism features which can result in very unhealthy puppies.

There are also some breeders who will make their female Frenchie go through multiple pregnancies in order to make as much money from her as possible. This can take a huge toll on the female both mentally and physically; Frenchies really should not have too many litters.

Then there is a also a growing demand for French Bulldogs of a certain color and pattern. The reality is, Frenchies only used to come in a small variety of colors, but now there is a demand for even more variations, which can result in unethical breeding and demand.

For example, the blue color spectrum can increase the risk of health issues in Frenchie puppies.

The bottom line is this; whilst Frenchies are an adorable dog, please do think carefully before you buy one, and research what to ask a breeder and look for in a puppy. To help you with that, I’ve created a guide for potential buyers.

I didn’t know a lot of this before we bought Claude, and it’s only since I started this website that I’ve become more aware of the issues around the French Bulldog breed.

If you are thinking about getting a French Bulldog, I recommend the following places which rescue Frenchies to get them better homes:

There is no such thing as a rare breed zebra French Bulldog, let alone a Frenchie with tiger stripes. The whole think was a fake, and just intended to be a funny video by the professional make-up artist who created the viral video.

If you do want to buy a Frenchie with unusual colors, please do you research first, and always consider getting a dog from a rescue who really needs a home.