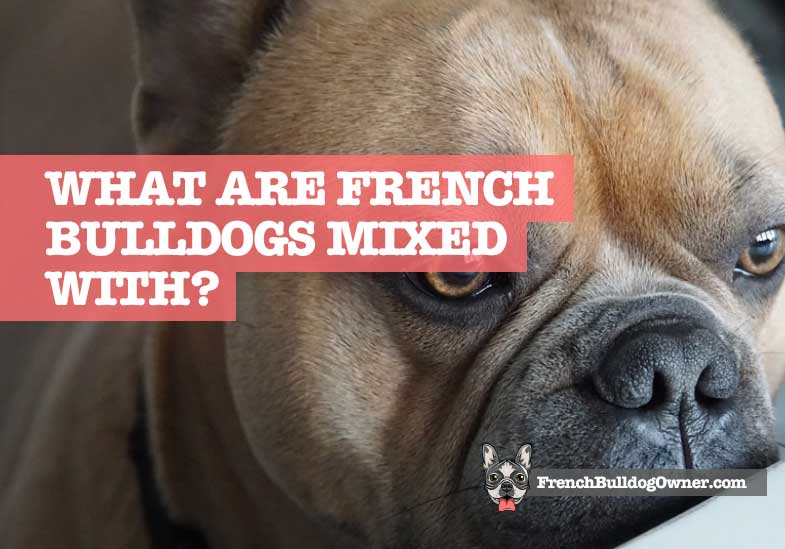 What can you cross a French Bulldog with?

Frenchies are Frenchies. They aren’t any breeds that they are mixed with, because as soon as you do that, they are no longer a Frenchie.

However, people have crossed the French Bulldog with other breeds in recent times. Here’s just a few I’ve found online:

Handy Hint: Frenchies and Boston Terriers mix to create the Frenchton. But did you know that there are some quite significant differences between Bosties and Frenchies?

Where do French Bulldogs originate from?

French Bulldogs have their history spread between three major countries: England, France, and the United States. Originally the major stock for these dogs were large, stocky English Bulldogs from 200 years ago. What we know now as French Bulldogs were mixed with other breeds to create the dog we know today. Let’s take a closer look.

The original breed for the French Bulldog harkens back to the dogs of the Greek Molossians. These large dogs were spread around the world by traders, and the British developed the English Mastiff from this lineage.

Eventually, a sub-breed of these dogs was developed, the Bullenbeisser, which later developed into the Bulldog. These dogs were used in bull-baiting and were rather large dogs, much different than the Bulldogs of today, as they were significantly larger with a large flattened snout.

In the 1800s, Toy Bulldogs became increasingly popular in Britain. This was a result of the Bulldog being mixed with a variety of smaller dogs to reach this smaller size, such as terriers and ratter dogs.

By 1850, the Toy Bulldog was common in England, averaging between 12 and 25 pounds and having round foreheads, with short underjaws. They could have upright or rose ears, and many were quite lively.  Over time, they became popular in the English midlands and became a symbol of the lace-makers in Nottingham.

Industrial Revolution threatened the jobs of many workers in the cottage industries. As such, many lace-makers moved to the North of France, to the countryside. Their Toy Bulldogs came with them, and they were incredibly popular in the French countryside. French Bulldogs were mixed with other dogs, such as terriers and pugs, and they were dubbed the Bouledogue Francais.

English breeders helped supply the rapidly increasing demand as the French Bulldogs popularity spread to the big cities in France, such as Paris.

In addition to being kept by everyday citizens, from butchers to cafe owners, they were also popular pets of the les belles de nuit (the Parisian ladies of the night). Artwork began to portray Frenchies, with artists such as Toulouse Lautrec painting these wonderful dogs.

Because of their popularity in France and how the breed was changed, it was years before they had any popularity in their native England. Indeed, the French developed and nurtured the breed until towards the end of the 19th century, when elite Americans discovered the French Bulldog.

Over the years, these dogs underwent several changes. They were bred to be compact, with straight legs, and both the “bat” ears and “rose” ears conformations were widely accepted in France. The bat ear is a more upright ear, while the rose ear conformation is an inverted bat ear.

Americans traveling to France began to bring these little dogs back with them to the United States. While the French Bulldog was not yet an approved American Kennel Club breed, ladies exhibited them in 1896 at Westminster and one was featured on the cover of the 1897 Westminster catalog.

The Americans tended to gravitate towards Frenchies with erect, bat ears, while the French and British breeders bred for the rose ear. At the Westminster show, both bat-eared and rose-eared Frenchies were shown, but the English judge only featured the rose eared Bulldogs.

The Americans retaliated and organized a breed standard via the French Bulldog Club of America, allowing only the bat ear. This was the first breed club established to showcase the French Bulldog anywhere in the world, and it set the bar for the breed around the world.

The next year, at the 1898 Westminster show, both bat-eared and rose-eared dogs were going to be shown, even with the new breed standard in place outlining that all French Bulldogs needed to have the upright, bat ear.

The American judge and breeders refused to participate in the show, and the French Bulldog Club of America organized a show that only allowed French Bulldogs with bat ears to be shown, and the winner was a brindle Frenchie by the name of Dimboolaa.

Did You Know? There was a French Bulldog on The Titanic? Read more about this part of history and some really interesting facts about his owner.

The decline of the Frenchie

The Frenchies had a surge in popularity, especially among members of high Society on the East Coast, but the dogs saw a decline in their popularity that lasted for several decades, starting near the end of World War I.

There are likely many reasons that contributed to that fact, with one being that Boston Terriers experienced a skyrocketing popularity themselves.

Did You Know? Many people can’t tell the difference between Boston Terriers and French Bulldogs. Click the link to see the differences and take our quiz.

Other reasons include difficulty whelping; many French Bulldogs have issues whelping naturally even today, so during the early part of the 20th century, it was especially difficult for them without relatively safe cesarean sections being performed regularly.

Summers on the East Coast were also difficult for these little dogs without air conditioning, and many had issues such as heat stroke – French Bulldogs cannot live outside as they find the heat hard to cope with.

In addition, purebred dogs were not an important commodity during the Great Depression of the 1930s. The breed faded out until they were considered a rare breed by 1940, with only a small number of American and European breeders raising the dogs.

At that time, only 100 French Bulldogs were registered with the American Kennel Club. The following years during World War II weren’t much better for the breed, with many starving, dying in war, or being put down due to a lack of available food.

At this point in time, French Bulldogs were largely bridle specimens, with the occasional pied and white dog. Creams and fawns didn’t begin to become popular until the 1950s with Amanda West, a breeder from Detroit.

She showed cream colored French Bulldogs with increasing success; her dogs had over 500 group wins, 111 Best in Shows, and 21 consecutive breed wins at the Westminster Dog Show. This increased the popularity of Frenchies with a cream and fawn coloring.

Unfortunately, there were still only a few registered French Bulldogs in the country, with only 106 in the American Kennel Club’s registry as of 1960. It would take a new surge in popularity to help keep the breed from dying out.

Increasing popularity of the Frenchie

Young breeders took an active part in the club and helped transform specialty shows into hugely popular events. Over 10 years, the number of registered Bulldogs increased from 170 in 1980 to 632 in 1990. By 2006, over 5,500 French Bulldogs were registered with the American Kennel Club.

Today, the modern French Bulldog is popular with everyone from celebrities to everyday folks all around the world. They have been featured in ads, as well as had parts in movies.

With their current popularity, it’s important for breeders and fans of the breed to minimize the health problems that plague Frenchies, as well as maintain the breed’s standards.

link to How Often Do Dogs Need Teeth Cleaning?

A dog’s mouth is a battlefield of competing bacteria. It is here where digestion starts and strong defences are needed to keep the environment working well. Unfortunately, it is also the point of...

Continue Reading
link to Is it Illegal to Put Dog Poo in the Garbage?