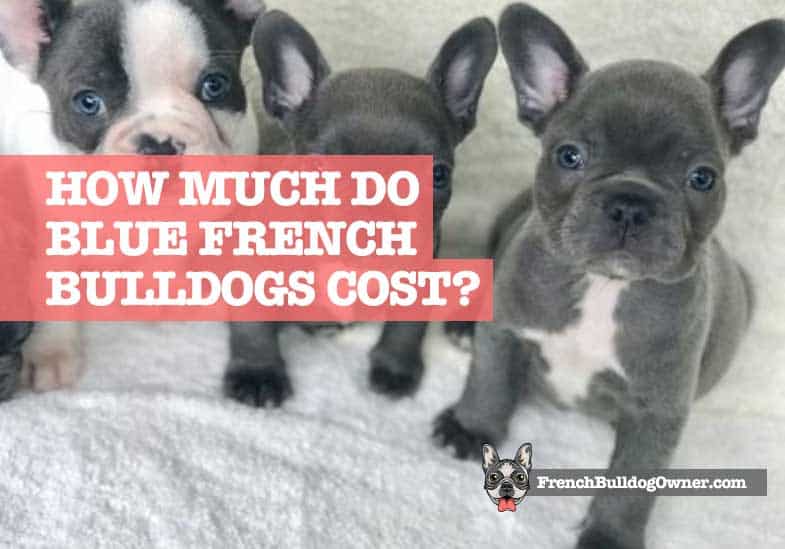 If you’re thinking about getting a blue Frenchie, one of the key questions you might have will be around the cost. For example, does the color of the dog’s fur affect its price? And does the breeding of the dog drive up the price?

When we were originally considering getting a Frenchie, we quickly discovered that blue French Bulldogs were far more expensive than any other color. We ended up opting for a standard colored Frenchie instead (and we love him, of course).

However, this process did give us a very good insight into how much Blue French Bulldog costs, so I wanted to share that with you today.

Handy Hint: With Frenchie’s being one of the most popular dogs in the American Kennel Club, as well as worldwide, there is no shortage of blue Frenchie puppies for sale; but when looking for your new dog there can be risks involved, meaning that care needs to be taken before you hand over any money.

Why do blue Frenchie’s cost so much?

Part of the reason that blue Frenchies are one of the most expensive dog breeds is because of the medical costs involved in the breeding process. It’s also down to how rare they are.

Like all dog breeds, if you are looking for a pure-bred Frenchie then adopting a puppy from a professional breeder is recommended.

Because of their small and compact anatomy, Frenchie’s hips are often very narrow; making it very hard, if not impossible for them to naturally give birth without major risks to both the mother and the puppies.

Because of this, professional breeders often forgo natural birth altogether and instead choose to have C-sections performed (see how much this costs) to remove the puppies safely with minimal risk to their breeding dog. Breeders also often use artificial insemination to impregnate their dogs.

This does tend to result in large vet bills which only help in driving up the price of blue French Bulldogs, although you should get the peace of mind the puppy you are buying is safe and healthy, with no repercussions of a difficult natural birth.

Another factor when it comes to price is actually dependant on the color of the dog. As I mentioned before, blue Frenchie’s are an incredibly popular breed, and their fur color often plays into that.

While the most common colors for Frenchie’s are fawn (brown with a black muzzle), pied (black and white spots) or brindle (the classic mottled dark and lighter brown), the most popular Frenchie colors are tan, blue/gray, and black.

Because of the high demand for these colors, it does mean that dogs and puppies with blue, tan and black fur are more expensive.

Blue French Bulldogs in terms of breed are the same as every other type of Frenchie, except for their blue/gray fur color. Many associations, however, do not recognize the blue Frenchie as an official member of the breed when it comes to competitions.

This is because  they believe that it suffers from too many different health issues; but the fact of the matter is that while some Blue Frenchies do develop alopecia (hair loss), many other variations of Frenchie are also affected.

In reality, most blue French Bulldogs do not suffer from health issues any more than any other kind of Frenchie. I base this opinion on having spoken to owners of blue Frenchies as part of this research, rather than any scientific study.

No, they don’t, but they still will shed a lot, just like a standard Frenchie colour will. French Bulldogs tend to shed their undercoat about twice a year.

I’ve written an extensive guide about Frenchie hair shedding which explains exactly what you might be letting yourself in for. These guys are not hypoallergenic despite what you might have been told.

Frenchies also have a tendency to develop alopecia (a skin condition that causes patches of hair loss), but this can be managed and their short, coarse hair doesn’t result in massive amounts of dog hair being left throughout your home.

How long do blue French Bulldogs live for?

It’s only natural that you want your blue French Bulldog in your life for as long as possible, and if your dog is healthy and well cared for they can live between 10 and 14 years on average, with the oldest living up to about 16 years old.

This is along the same lines as many other dog breeds, with smaller dogs such as Frenchie’s living almost twice as long as larger breeds such as Great Danes and Wolfhounds.

A healthy, well-bred dog is going to have a longer lifespan than one that had less than stellar origins, which is yet another reason why you should only consider buying puppies from reputable breeders rather than illegal puppy farms or unqualified breeders.

Buying an older dog from a pound or shelter may result in not as many years of having a dog, but just because they aren’t a puppy it doesn’t mean that they don’t deserve a loving home.

If you are thinking about buying a blue French Bulldogs and are comfortable which how much they might cost, you should consider the following aspects too.

What health issues do blue French Bulldogs have?

As mentioned above, Blue Frenchies are not really any different to other types of French Bulldog, but that does mean that they may be susceptible to similar health conditions.

Because of their breeding history and small, compact anatomy, French Bulldogs do unfortunately have a disposition towards physical and genetic health issues.

Being a flat-faced breed (otherwise known as a brachycephalic breed), they’re short skulls can cause difficulties when breathing, as well as snoring (which Frenchie’s are rather famous for).

As I mentioned before, Frenchie’s can also suffer from alopecia, a skin condition which can cause hair loss, which often first appears between 4 months and 2 years old, and while blue French Bulldogs are known for this, any kind of Frenchie can develop it.

Should I get a rescue blue French Bulldog?

Getting a rescue dog is always a fantastic option and is always recommended especially if you are not looking for a pure-bred. As with all rescue dogs, rescue blue Frenchie’s deserve the same amount of love and attention that brand-new puppies do, if not more.

As they are in high demand, blue Frenchie puppies are snapped up very quickly than more common pi-bald or brindle colors, but why not consider getting a slightly older pooch?

Adult blue French Bulldogs are far calmer than hyperactive teenage dogs and are an excellent alternative if you are looking for a steady but loyal companion.

In fact, if you do buy an adult from rescue, chances are how much you pay for a blue French Bulldog could be considerably less than the average.

As I mentioned above, blue French Bulldogs are an incredibly friendly breed, with an affable nature; and, while they do have a stubborn streak to them, they aren’t quick to anger (unlike other small, yappy dogs).

In fact, while personality does depend on your individual dog, older blue Frenchie’s like nothing more than to flop about on the sofa in between walks. They are also quiet and often polite, although they can get a little territorial.

However, temperament isn’t a set, predictable trait that can be assigned to a whole breed, and the behavior of your dog can be shaped by how it was raised and how well-trained it is.

Dogs are not born fully trained, so getting your puppy trained quickly can go a long way to unlearn their more negative traits.

Buying any dog is a huge commitment. Our experiences of Frenchies has given us a great insight into how well suited they can be to an owner, and vice versa.

Now you know how much blue French Bulldogs are, please don’t rush out and buy one. Take your time to consider if it’s right for you.

The following guides will offer some essential insight: