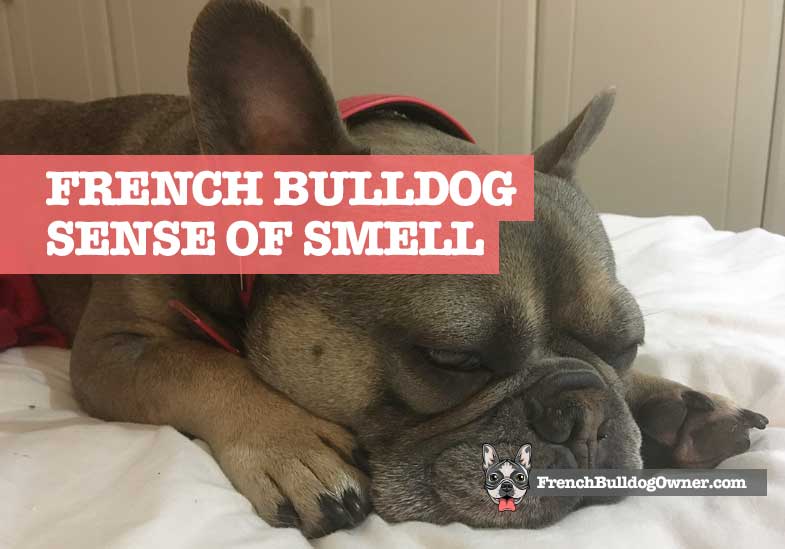 My wife and I were sat in bed last night when Claude the Frenchie released the worst gas I think I have ever had the misfortune to smell. It actually made our eyes water.

After the stink dispersed, we had a giggle to ourselves about how he managed to sleep through the whole thing… how could he could not smell it himself? If I’d done that, it would have woken me up…

Joking aside, it got me wondering how good a French Bulldog’s sense of smell is. It was hard to find any exact scientific research, but I was able to make some assumptions. Here’s what I found out.

As you can see, it’s all relative.

Whilst all dogs will easily beat their owners in being able to sniff things out, some breeds have better sense of smells than others. This is certainly an area where Frenchies would under-perform if placed into a smelling competition with other breeds.

It’s all due to their brachycephalic nature which means a flat face and a shortened snout.

The reason this physical trait has an impact on a French Bulldog’s sense of smell is because they don’t have as much room for smell receptors as longer-nosed dogs do.

For example, a longer nosed dog breed like the Beagle who are renowned for their tracking ability, has 220 million scent receptors in their nose (aka olfactory receptors). The area in their nose in which the smell receptors are housed is around 150 cm2.

In humans, we only have an area that’s 5 to 10 cm2 in our nasal cavity. We are said to have just 6 millions scent receptors (see source). Based on that, it’s easy to see why dogs have much better senses of smells compared to us.

But how does this compare and relate to French Bulldogs?

Estimating a Frenchie’s sense of smell

Unfortunately, I cannot find any research to explain how many smell receptors Frenchies have, or what the surface area of their nasal cavity is. But, if you look at a French Bulldog’s snout, it is very small, so you can make some assumptions.

When I compare a Beagle nose to a French Bulldogs, I’d estimate that a Frenchie’s could have half the capacity.

Based on my very rough assumptions, I would guess that French Bulldog’s have 110 million scent receptors – half of what a Beagle does. Continuing this very bad science through to conclusion, I am going to say that a French Bulldog’s sense of smell is half that of a Beagles.

How this compares to other breeds

A French Bulldog’s sense of smell is good. I’ve seen our own dog Claude sniff food leftovers out from 100 meters away in our local park.

But in comparison to some of the “best smellers”, it’s quite far down the list. Here is the top 25 dog breeds according to how good their sense of smell is according to Top Dog Tips.

Putting a dog’s sense of smell into perspective

Whilst researching this content I found an excellent article on the PBS.org website. They referenced a section from Alexandra Horowitz’s “Inside of a Dog” book:

“While we might notice if our coffee has had a teaspoon of sugar added to it, a dog could detect a teaspoon of sugar in a million gallons of water, or two Olympic-sized pools worth. Another dog scientist likened their ability to catching a whiff of one rotten apple in two million barrels.”

Even if a Frenchie’s sense of smell is only half as good, just think what that means for a moment. It’s quite an insane thought!

After researching this article, I spoke to a couple of Frenchie owners who had adopted deaf dogs from rescues. They told me that their dogs relied on their sense of smell, and believed their other senses were actually heightened to compensate for the lack of hearing.

If this is true, I think it’s a lovely story. It warms my heart to think that despite their sense of smell not being as good as other dogs, Frenchie’s can still use theirs to a great advantage.

If you own a French Bulldog and want to know more fascinating facts about your new pet, then here are some of my more popular guides on similar topics.