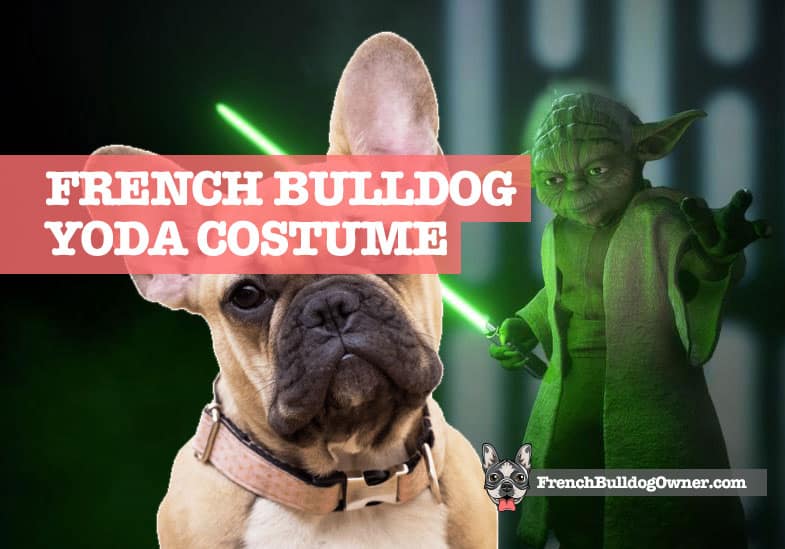 In recent years there has been an explosion of viral videos of French Bulldogs doing or wearing funny things. One of the more popular genres of Frenchie videos are the cosplay ones where the pups wear costumes from popular films… and none more so than Star Wars.

One of the more popular outfits in the videos has been the French Bulldog Yoda costume. When you have your own one, you can dress your Frenchie up like the diminutive Jedi for hours of entertainment.

There are a few different Yoda dog costumes for a French Bulldog online, all of which vary in quality. The best one I have found is this official Disney licensed Frenchie Yoda outfit on Amazon. Click the image below to see how much it costs.

When you buy the French Bulldog Yoda costume you get the following:

When you do buy, please make sure you look at the manufacturer’s sizing chart first and measure up your Frenchie before the full Yoda transformation!

Other Star Wars costumes for your Frenchie

Perhaps the little green Jedi isn’t your thing. It might be that you prefer Wookies or Ewoks. If you do, then you’re in luck because it’s now possible to buy a range of Star Wars themed costumes for your French Bulldog that are all just as good as the Yoda outfit.

Here’s a selection of the best: May the Force be with you (and your Frenchie)!

This is one of the most legendary French Bulldog outfits of all time, made famous by countless viral videos and memes… and it’s easy to see why: your Frenchie can join the dark side!

It’s an amazing replica of Darth Vader’s fearsome outfit, albeit on a much smaller scale. With two pieces, your French Bulldog is going to look amazing dressed in the evil Sith Lord’s cape and body armor – plus the adorable helmet attachable with elastic.

Imagine how funny your French Bulldog will look when dressed as Darth Vader, coming down your hallway, with the Star Wars theme music playing. If you have two Frenchies, why not get one in this outfit and the other in a French Bulldog Yoda outfit for the ultimate lightsaber battle?

So, if you want to get your Frenchie kitted out like Luke Skywalker’s father, click here to see the Amazon prices.

Who can fail to remember the epic battle between Obi Wan Kenobi and Darth Vader? You could create this scene in your own living room if you have a pair of Frenchies with this choice and the previous Vader outfit.

Alternatively, you could buy this Jedi robe for one of your pups and get a Yoda dog costume for the other French Bulldog to make a good team to battle the dark side.

It’s one of the more basic Star Wars outfits for Frenchies, but don’t let that put you off. Your canine friend will look just the ticket in this cool setup – read the Amazon reviews to see for yourself.

This outfit was made famous in the first Star Wars movie, where the intrepid hero Luke Skywalker made his attack on the Imperial Death Star. It comes with the famous orange jump suit, a soft helmet, and even an eye mask.

If you want your Frenchie to “stay on target” and “use the force” then there really is no better costume than this one… personally, I prefer this to the Yoda French Bulldog Costume as I think it looks so much funnier. Click here to see the latest Amazon prices.

My wife hates Chewbacca, so we won’t be buying this funny outfit, but it could be the perfect costume Frenchie loving Wookie lovers. Yes, you over there in the corner!

Despite Wookies being over 7-foot-tall, this costume won’t add any inches to your Frenchie’s height, but it will add a whole Millennium Falcon load of attitude. So, if you want your Frenchie to be your co-pilot as you jump to hyper speed, look no further.

The outfit is very furry, just like Chewbacca, and comes with the ammunition belt and little pouch like he carries in the Star Wars movies. It’s got very good Amazon reviews.

Whether you love or hate Ewoks, there’s no denying how cute a French Bulldog would look in an Ewok costume. In this Star Wars fancy dress, your Frenchie will even end up shuffling around like an Ewok too, due to the way the outfit has been designed.

Just like the French Bulldog Yoda Costume, this comes in the right size for your Frenchie in two pieces. You get the main body aspect, and then the headgear, which is an Ewok hood, specially tailored to stay on your Frenchie’s head.

If you want your Frenchie to look like one of the cuddly inhabitants of the planet Endor, go check out the latest Amazon prices.

My last recommendation for Frenchie fancy dress with a Star Wars twist is the Princess Leia outfit. Of course, the best thing about this costume is the hair buns on the side. Providing you can get your Frenchie used to wearing them, this could be the best costume of the lot.

If you want your French Bulldog to join the Rebel Alliance and add a piece of royalty to proceedings then read the Amazon reviews before you buy.

I think the reason a Yoda French Bulldog costume is so funny is because Frenchies aren’t that dissimilar to Yoda in many respects: big ears, wrinkly skin, small in stature.

If you love dressing up your Frenchie, then you might also like these other gear recommendations I recently published:

However, I’d like to leave the last word to Yoda if I can:

“Fear is the path to the dark side. Fear leads to anger. Anger leads to hate. Hate leads to suffering.”