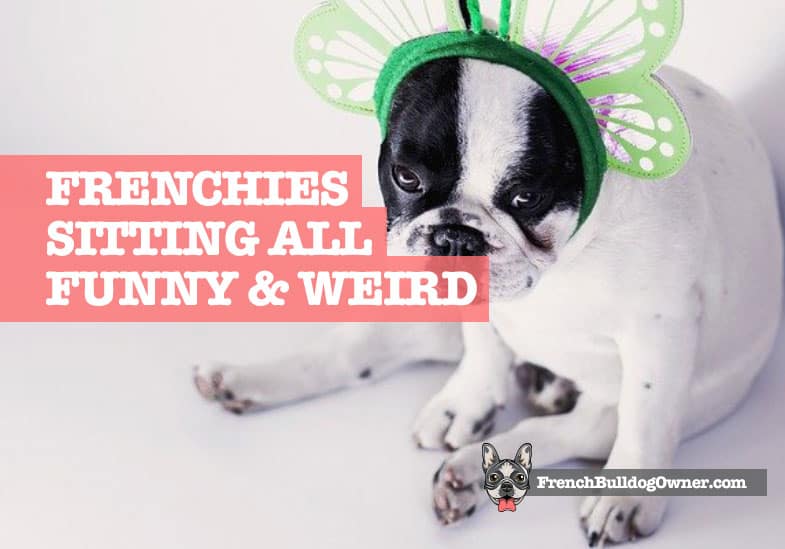 Nothing quite prepares you for life as a French Bulldog owner. It’s a rollercoaster for sure, with twists and turns every step of the way. One of the funnier things that they do is the weird ways in which they sit; it’s very different to other dog breeds.

In the time we’ve had Claude, I’ve caught him sitting in a range of weird positions. I’ve given them three distinct sitting styles which other owners might recognize:

The first two are funniest, as will often be described as your French Bulldog sitting like a human. All of them involve your Frenchie looking up and just chilling like they own the joint.

In this blog post I am going to share with you some of the funniest photos I have found online of French Bulldog’s sitting weird, and then try to answer why they sit in funny positions like this lower down the page.

Why do French Bulldog sit funny and weird?

I don’t think it’s anything to worry about, as every owner I know will tell you that the funny sitting positions are normal. But there has to be an underlying reason why French Bulldogs sit funny, so I did a little research on vet websites.

Apparently, this way of sitting where the Frenchie sits with hips and legs to one side is commonly called the “lazy sit”. It’s a side sit basically, slouch-like or frog-like in appearance.

According to PetFinder.com, this can be the sign of canine hip dysplasia.

“Dogs that have severe hip dysplasia often begin to have problems as puppies. Sometimes, the hip dysplasia does not cause pain for the dog, so they do not show signs of it until they develop arthritis in their hip joints. Some dogs that are not as severe can live out their entire lives with few, if any symptoms.”

If you’ve read the 31 health issues guide I wrote, you will know that hip dysplasia is one of the most common problems that can affect Frenchies. So perhaps this way of sitting is a signal that there are issues to come in later life?

Similarly, it could be a sign of another health problem such as dislocated kneecaps. However, with this condition it would be more obvious as your Frenchie would have problems walking and visibility be in distress.

The bottom line is Frenchies are more comfortable sitting in funny positions due to their breeding. They are renowned for developing problematic spines, hips, and knees, so sitting like this is probably the most comfortable for them – even if they don’t have an underlying issue.

Why do French Bulldogs sit on you or your feet?

Have you ever wondered “why does my French Bulldog sit on me” or why they love sitting on your feet so much?

Well, I’ve discussed before at how clingy and cuddly this breed is, so that’s part of the behaviour explained away – they want to be close to you and love you more than you can imagine!

A little online research also uncovered some additional theories as to why Frenchies like to sit on your feet or completely sit on your whole body. Some popular thoughts are as follows:

What other owners say about funny sitting positions

I like to give a broad spectrum of opinion on the blog, so either ask other Frenchie owners what they think or search on social media for relevant comments. Below are some of the best responses I got about people French Bulldogs sitting funny.

“Mine Frenchie sits like a frog all the time, never sits like I thought dogs should. It must be a Frenchie thing; it makes me laugh so much!”

“All French Bulldogs sit weird; it’s a bulldog only pose! I have honestly known a breed with such a slouch or have the ability to sprawl around like they do.”

“Yes, my French Bulldog’s sitting positions are weird and wonderful too. He will often sit around the house like a human being, either by showing a bit of leg, or with his legs completely extended out.”

“It’s not unusual to see a French Bulldog sitting like a frog. It might like weird and funny, but it’s very common with this breed. I’ve always assumed due to their spine and hips which can become painful due to the way they are bred.”

“It’s like they’re riding side saddle on a horse sometimes. I describe it as if they are sat on one hip, with both legs to the side position. It’s cute. Frenchies sit in the weirdest positions.”

“My girl sits down with her legs stretched out at the back. It’s almost like she is trying to do yoga, but my husband calls them her chicken legs!”

“Our French Bulldog is always sitting with his legs straight out and his bum on the floor. I think they do it to help them balance probably, but from other photos I’ve seen, it’s completely normal and they all seem to do it.”

Are you worried about your French Bulldog sitting funny?

I also stumbled across a new Frenchie owner who posted this comment in a Facebook forum with some concerns about how hers was sitting:

“I am looking for some advice please and I am not sure if I’m being paranoid or not, but my boy always seems to sit like he is doing in this photo. I’ve noticed like a sort of hump in his back. He is two years old, doesn’t seem to be in pain at all and walks fine. Just wondering if this is normal or not? And if the way he is sitting is normal. He is my world and I would be heartbroken if anything happened to him.”

The majority of responses were reassuring ones, with most people replying that French Bulldogs sitting funny was an entirely normal thing. It’s been compared to looking like a frog or when humans sit down.

However, there was one word of warning copied and pasted below:

“Mine does too, but she has been diagnosed with two vertebrae slightly out of alignment. One morning she could stand but not walk and just looked in pain. I had her spayed in case it was genetic and wish more people would get x-rays before breeding faults. She had the vets puzzled as next day she was fine, as if she had a trapped nerve or something. She sits funny too like yours does.”

Whilst that was the only possible negative comment, I could find online about why French Bulldogs sit funny, it’s worth including.

Well, despite the fact that almost every Frenchie owner you will speak to will confirm the weird positions their dogs will sit in, nothing ever beats getting a professional veterinary opinion.

If you are worried about how your Frenchie is sitting, please do get them checked out by your vet just in case there’s an underlying health issue, as it could be a sign they will develop hip dysplasia in later years.

To conclude, all Frenchies tend to sit in weird positions.

The reasons they do it is more likely than not down to their breeding and skeletal structure. Unfortunately, this breed has been bred to result in certain health conditions affecting the spine, hips, and knees.

But that doesn’t mean your Frenchie is in pain, and it doesn’t mean there’s anything wrong with them. It simply means that they sit in what we believe to be funny positions as it’s more comfortable for them this way.

French Bulldogs do the funniest things, and here’s more proof!