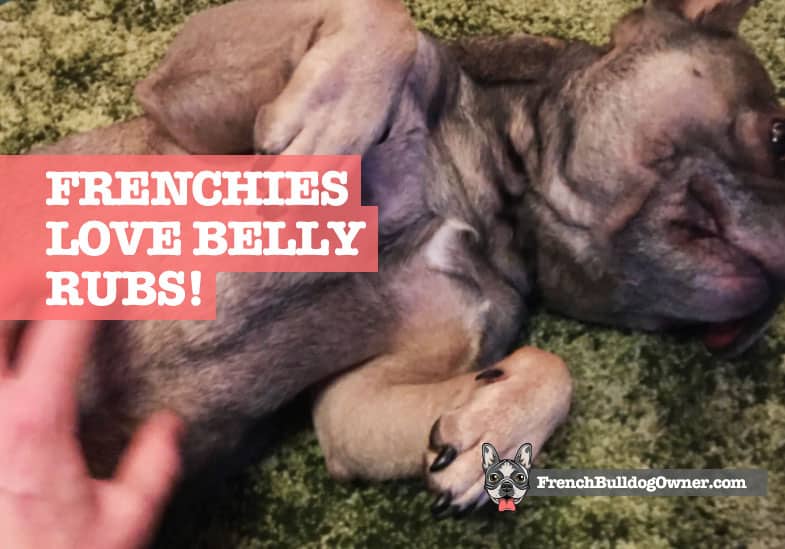 If you’re looking for a dog who wants constant affection, cuddles, and love, then look no further than a French Bulldog. This breed is particularly renowned as a companion dog, and they love nothing more than being in the company of their human owner.

And as an owner, you will be called upon constantly to satisfy each and every whim of your Frenchie. They can be hard work; take it from me, I own a demanding Frenchie!

But what about a good old-fashioned belly rub? Everybody knows that dogs love getting their belly rubbed, but, what about Frenchies? Do they fall into this particular category, and is a belly rub something you will have to administer almost on a daily basis?

Let me give you the low-down…

Do French Bulldogs love belly rubs? Most Frenchies love having their belly rubbed and scratched. When they go submissive and roll on their back in front of you, it’s a sign they trust you to rub their belly. It’s said to stem from social grooming in mammal and pack animal behavior.

Why do Frenchies expose their bellies?

The reason why your French Bulldog rolls on his back and exposes his belly to you is quite interesting. You might have also seen your Frenchie do this with other dogs during play… it’s a good sign most of the time, and here’s why.

French Bulldogs roll onto their back when they are being submissive and during playtime. If your Frenchie is comfortable with you and doesn’t feel threatened, he will roll on his back and expose his stomach.

You will see this happening a lot when you start to stroke your Frenchie. Occasionally he will flip over so you can get to his belly. By doing so, it shows he’s completely at ease with you, is non-aggressive, and likes the feeling of his belly rubbed.

Essentially, he’s saying “give me more”.

However, you will also see Frenchies rolling on to their back and exposing their bellies when approached by other people or dogs. This isn’t always an invitation to rub their belly, especially if the belly access is combined with other submissive behavior such as lip licking and tail tucking.

So, let’s say it’s a strange dog you’ve never met before who rolls on his back when your approach, I would not immediately go to rub their belly. They could feel intimidated by it. Take things slow instead, as they could simply be submissive, rather than wanting play.

Let’s say you’ve established that your Frenchie wants you to rub his belly. But why? What makes their belly being rubbed feel so good that they want you to do it?

In simple terms, it feels good. We all have things we like having done to us, right?

It’s said that the reason Frenchie (or any dog for that matter) likes belly rubs so much is because it stimulates their hair follicles… and there’s some theory behind why they love this so much.

What the experts says about belly rubs

We know that Frenchies like belly rubs because it stimulates their hair follicles, but why does this elicit such a pleasurable response?

I’ve read some blogs that say it’s all related to dog’s social grooming, and how this has been passed down through their generations. It’s said that dog love being stroked, and belly rubs in particular sets of a signal to the brain that they love.

Apparently, hair stroking is linked to how mammals in social groups used to take care of each other’s hygiene. The body and brain like this, and therefore pleasurable signals fire off.

Should you rub your French Bulldog’s belly?

Are there any times when you shouldn’t give your Frenchie a belly rub? Well, actually, yes, there are. Your Frenchie might not actually want you to touch his belly!

When your Frenchie rolls on his back and offers his stomach up, then it’s time for a rub. But never flip your Frenchie over to rub his belly yourself. That could make him anxious and result even in a bite (here’s how to stop biting).

If your Frenchie lets out a growl when you are touching his belly, then stop immediately.

Every dog has a different personality. You might have a Frenchie who doesn’t like his belly being rubbed, so if that’s the case, don’t force it. They are plenty of other games they love to play (here are some fun ideas).

However, if your Frenchie does love having his belly rubbed, go for it! He will love you even more after you’ve given this part of his body some extra special attention!

Why do dogs kick their legs when you scratch their belly?

One strange little quirk you might see your Frenchie doing, is the leg kicking when you scratch or rub their belly.

It’s called their “scratch reflex” and happens when the nerves under his belly skin are activated. These are connected to his spinal cord, which then communicates to his leg muscles, telling them to kick to get rid of the scratch or irritant.

It doesn’t mean your Frenchie doesn’t like having his belly scratched. It’s just his body’s nervous system reacting to the action.

I’ve never met a Frenchie who doesn’t love a belly scratch, but that doesn’t mean they all will. Only ever rub a dog’s belly if they offer it up to you and are comfortable with the scratching.